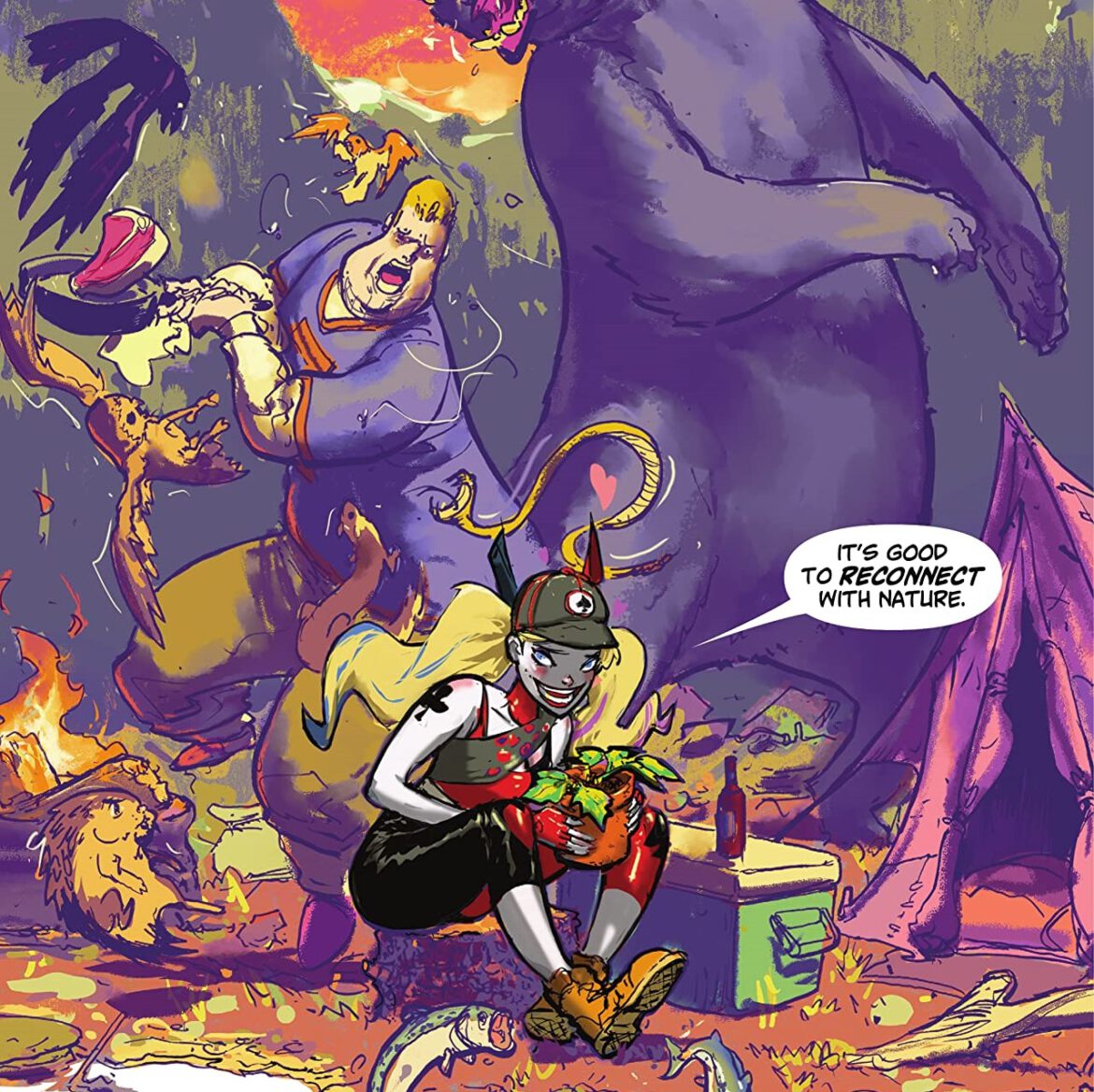 Overview: In Harley Quinn #7, Harley and Kevin go camping and live through the plot of a certain great outdoor movie from the 1980s.

Synopsis (spoilers ahead): Keepsake welcomes the “Caucus of Corruption” to his lair. The Caucus is composed of knock-off villains such as “Blane” and the “Polyphonist.” Hugo Strange enters and argues with Keepsake before inquiring how he plans to deal with Poison Ivy given that her root system essentially provides control over all of Gotham. The scene switches to Harley struggling in her group meditation session with the Former-Clown Support Group. Kevin seems much more at ease, but Harley gets frustrated and seeks out higher-priority camping activities: S’mores. A woman runs into the scene searching for her lost pug, Waffle. Harley and Kevin offer to help.

As they search, Kevin remarks that between starting the support group, helping Batman, and trying to find Ivy, Harley has taken on an awful lot. They argue until they hear a dog barking nearby. Harley ducks into a cave and finds Waffle. She also finds a large, angry bear.

In Harley’s running inner monologue, she has been musing on the self-destructive nature of Gotham, and the scene switches to Gotham in the grips of Fear State. Dr. Strange is running amok dressed as Batman, and Lockwood remarks that the fear toxin is causing mayhem. Dr. Strange wants to build the city’s fear of its masked heroes and then use Harley to find Poison Ivy.

Back in the woods, Harley, Kevin, and Waffle are fleeing the bear until Harley nearly tumbles over a cliff. Kevin rushes off to find a tool to help lift her up, and Harley muses on the nature of love, commitment, and taking on too much. Just as she is losing her grip, Bella (Gardener) appears and sends some vines down to retrieve Harley. Bella announces that she has found Ivy.

Analysis: I was unsure about Kevin in the first two issues, but writer Stephanie Phillips has stuck with him, and the commitment has paid off with Harley Quinn #7. It is interesting to see Harley paired with an essentially “normal” person who has also the sins of his past to work out. The support group retreat is an unusual choice, but it also ends up working. I can definitely relate to Harley’s struggles with meditation and seeing a scene from the classic Dan Aykroyd/John Candy film The Great Outdoors be re-enacted in the pages of Harley Quinn is quite amusing.

The book does feel a bit light-hearted, and although it’s welcome and we certainly do not need brooding heroes every week, until the closing lines, the book does feel a bit silly at times. Harley is playful and unafraid of acting silly, but she is not a silly person. Despite the fact that Phillips knows this and treats Harley accordingly, there’s still a risk that a book like this can underscore past versions of Harley in which she is unserious and largely present for comic relief alone.

Finally, there seems a bit of a consistency problem since writer James Tynion has emphasized that what separates Scarecrow’s efforts in Fear State from most of his past plots is the fact that Fear State is not simply another fear toxin attack. Yet, Lockwood explicitly states as such – perhaps he is just confused? Dr. Strange does not correct him.

Keepsake remains unworthy of Harley’s attention, but I’m obviously interested to see what happens with Ivy.