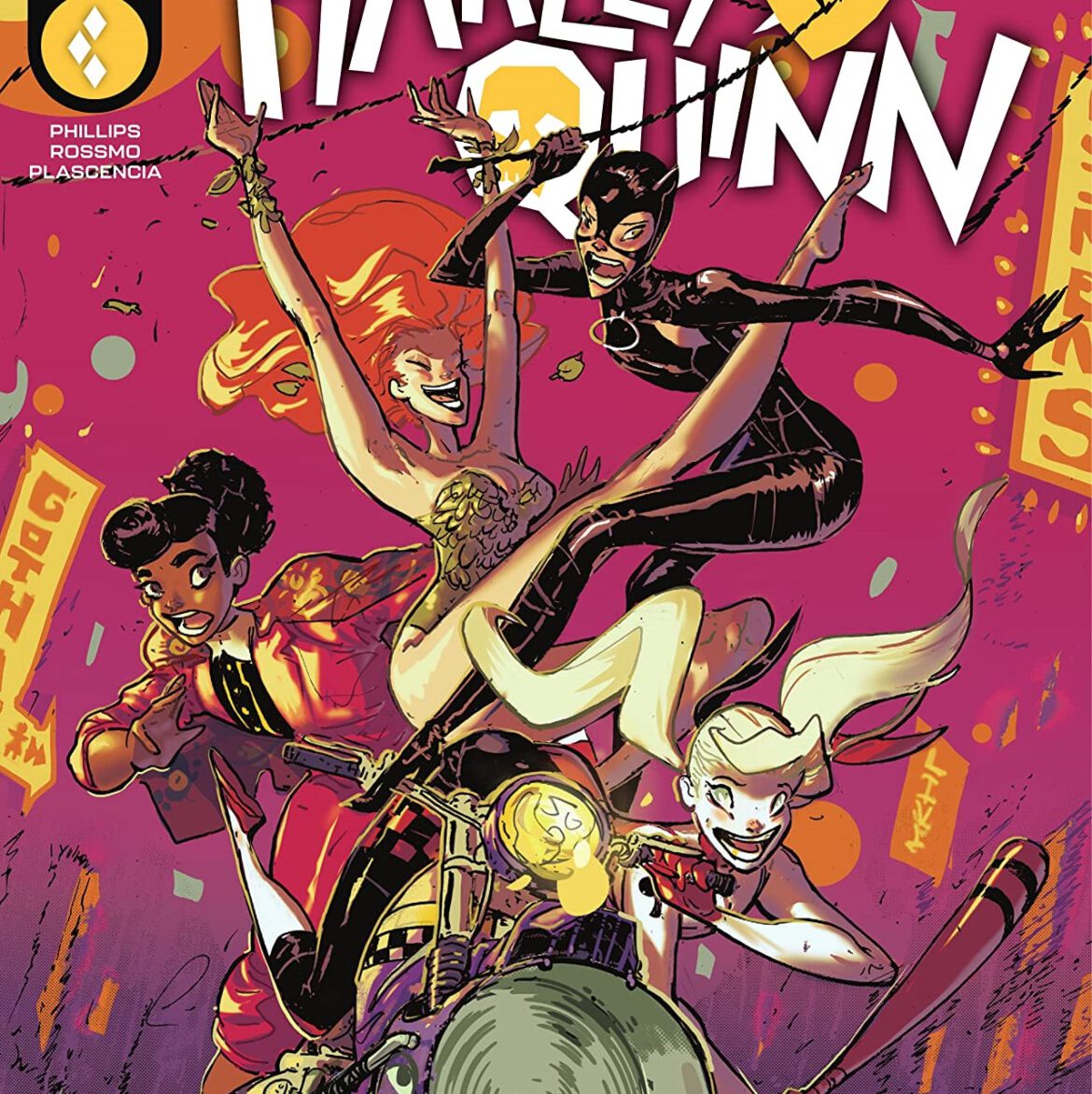 Overview: In Harley Quinn #8, Harley deals with Keepsake while trying to find the “real” Poison Ivy, and Kevin embraces the hero role.

Synopsis (spoilers ahead): Harley Quinn #8 begins in the Gotham sewers, as Kevin is preparing himself on Harley’s orders to defend the city. As he ascends, he encounters a woman set upon by Peacekeepers. After they dispose of the antagonists, she introduces herself as “Sam.”

Harley, “Part-of-Ivy,” Bella, and Catwoman are in Alleytown, searching for the key that will truly free Ivy. There’s a reference to a big fight with the “Wight Witch,” the context of which is only revealed via flashback when Keepsake shows up. Harley and her allies have learned that Ivy created a seedling of herself that the Magistrate possesses. The seed is the key to awakening Ivy.

In the present, Keepsake and Harley banter until the “Caucus of Corruption” shows up. They battle, and Harley is briefly threatened by “Blane” until what appears to be the real Ivy shows up to rescue Harley. Harley unmasks Blane and realizes that she is one of the former Joker clowns who was subjected to Dr. Strange’s mind control experiments at S.A.F.E. headquarters.

Back in Gotham, Sam and Kevin are discussing the possibility that Scarecrow is using waterways to bring fear toxin into Gotham. They look up at S.A.F.E. headquarters and see that the building is on fire. At the headquarters, Dr. Strange is dressed up as Batman, and he informs Lockwood that he plans to leave no witnesses. He leaps out into the night as Lockwood stares, dumbfounded.

Kevin rushes into the burning building in an effort to save people trapped inside as Harley spirits Ivy away from the Caucus of Corruption.

Analysis: The action definitely picks up in Harley Quinn #8, although the narrative feels a bit convoluted at times. Part of the action seems to be happening in the Catwoman series, and while that kind of linking is common and has generally been deftly done under departing Bat-book showrunner James Tynion IV, there are some significant plot holes left unexplained for readers not engaged with both books here (who is the “Wight Witch?”).

There are a few additional confusing moments, i.e., if the Caucus of Corruption is generally so infirm (especially to a formidable force like Harley, Selina, Bella, and some version of Ivy), why did Harley need to spirit Ivy away? To what danger was she actually being exposed? Surely it cannot be Keepsake, who is openly acknowledged in the book as unworthy of Harley’s attention. Dr. Strange is not yet on scene, and it’s not clear to me what Harley and Ivy are moving from or to. The appearance of “Full Ivy” when Harley is momentarily threatened by Blane is also left unexplained. Is that the real Ivy? How did she manifest as “Part-of-Ivy?”

The narrative in this book feels a bit rushed, which is odd juxtaposed with how little forward movement actually occurred in the previous book (i.e., Harley Quinn #7 or “Harley and Kevin Go Camping”). Perhaps that is because of the need to close Fear State or somehow tie up the ongoing threads into a satisfying resolution.

That said, our hero is dynamic, self-aware, and funny as ever, and at this point I trust writer Stephanie Phillips enough to see the narrative through.

Since anyone reading my Harley Quinn reviews knows what I think of artist Riley Rossmo’s style, I am going to refrain from commenting on the art. That said, Derrick Chew’s variant cover featuring Ivy and Harley is an absolute delight.

The Fear State tie-in narrative is hectic and confusing, but Harley still shines in Harley Quinn #8.