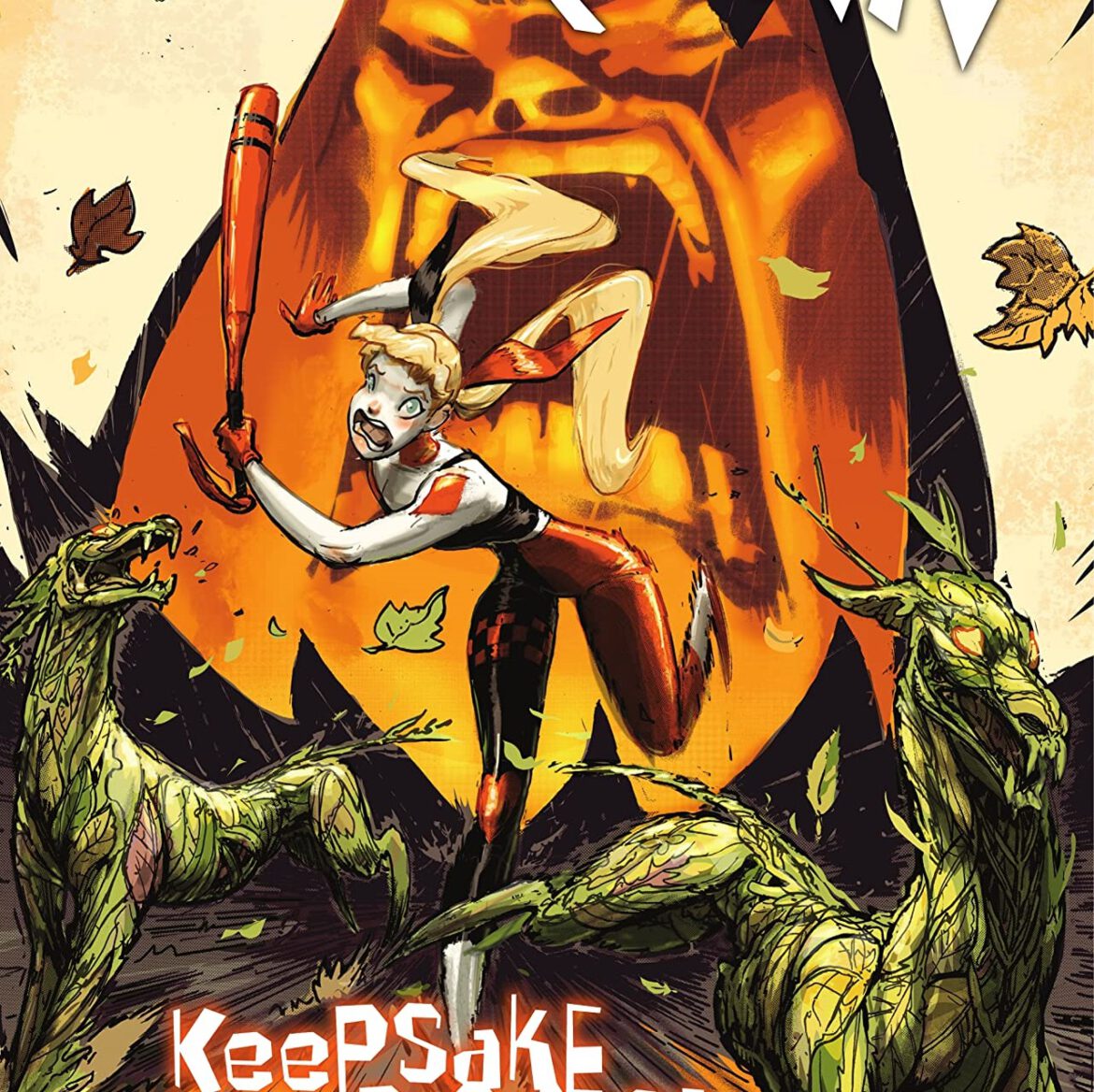 Synopsis (spoilers ahead): We start Harley Quinn #9 with a flashback to Dr. Harleen Quinzel walking down the darkened corridors of Arkham Asylum. She recalls that as a child she was never afraid of the dark. Nor did she fear spiders, heights, or close spaces. She did find clowns to be creepy, and as the panel shows her initial confrontation with Joker, she acknowledges taking “immersion therapy a little too far” (this moment is a fairly obvious and welcome homage to the same moment in Harleen). Flash forward, and Harley and Ivy are racing away from the Caucus of Corruption in Alleytown. Harley is musing about how her childhood fears, or the lack thereof, have translated into the usual adult fears like separation anxiety, loneliness, fear of failure, and, of course, toilet snakes. Harley and Ivy then stumble upon a 1968 Mustang and race off.

Back at S.A.F.E. Headquarters, Kevin is trying to rescue some of Dr. Hugo Strange’s minions from the burning building. He manages to break down the door, and the minions all rush out. Kevin sees someone still in need of assistance and recognizes the figure behind the door as Lockwood. Wrestling with Angel Harley and Devil Harley (in “Harlequin” costume) on his shoulders, Kevin struggles with the question of what Lockwood deserves and whether he should complete the rescue. Eventually, Kevin decides that the important point is not so much that Lockwood hurt many people, including Kevin, but that he, Kevin, is nothing like Lockwood. Kevin then lets Lockwood out.

Harley and Ivy are speeding along until Keepsake uses a flamethrower to cause an accident. With assistance from Ivy, Harley leaps up onto Keepsake and dismantles his weapon. He pulls a gun, but before he can fire he is mowed down by a speeding van commandeered by Bella Garten and Catwoman. The van is filled with the unconscious bodies of the Caucus of Corruption.

Back at S.A.F.E. Headquarters, pieces of the roof waylay Kevin, who Lockwood leaves for dead. Sam appears and helps Kevin out, and he returns the favor by leading her through the fire to safety. They agree to go out for pancakes.

Underneath Gotham, Bella, Catwoman, and Harley are moving Ivy to reunification with Queen Ivy. Harley stops Ivy and confesses that she is frightened by the possibility that after the reunification, Ivy is incapable of fully loving Harley. She asks Ivy whether they should just leave as is, without merging the two Ivys, and Ivy reminds Harley that she is just part of the whole. Harley accepts this and acknowledges that they need to go and help save Gotham as they embrace and move to kiss.

Analysis: I really enjoyed Harley Quinn #9. It picks up right where the last issue left off and is packed with a frenetic energy that encapsulates Harley herself. Our heroine is at the center of it all, even in the setting where she is physically absent (Kevin’s work at S.A.F.E. Headquarters). Kevin is able to find his way to the righteous path precisely because his friendship with Harley has changed his own conception of himself and of what he is capable (and it is has had similar effects on Harley, as we have seen through the series). In helping Kevin and so many of the other former clowns, Harley has helped herself. She wants to change who she can be and through the process of helping others, she is doing so. This is, of course, one of the central narratives of Batman himself, and writer Stephanie Phillips artfully weaves it into a classic redemption song for Harley.

Phillips also builds Fear State into the issue about as well as any of the Bat-Books have done, as Harley Quinn #9 centers on the relationship between childhood and adult fears. So much of Harley’s adult life is characterized by fear; accordingly, her realization that none of them are anywhere near as frightening as her full surrender to her love for Ivy has stark emotional resonance. This too mirrors so much of some of the struggles Batman experiences, especially in his love for Catwoman, who not coincidentally plays a part in this book.

The final scene, where Ivy assures Harley that reunified Ivy is part of whole Harley is sweet and affirming. I do not like artist Riley Rossmo’s style, but the final panel of Harley and Ivy embracing on the way to a kiss is stunning and obviously ties in with Harley and Ivy’s kiss in Batman #117.

This is a fantastic book. Phillips is an extremely talented writer, and I love her vision of Harley. The character growth in only nine issues is astonishing and will affect representations of Harley for years to come.