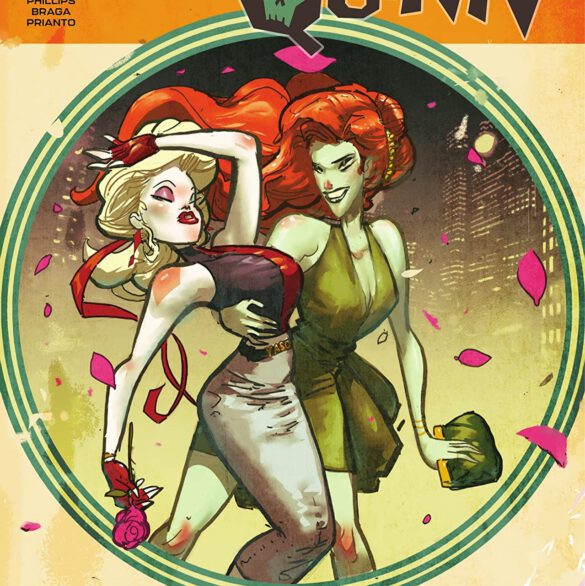 Synopsis (spoilers ahead): As Harley Quinn #10 begins inside a red pickup truck, a man stops driving on Lovers Bridge outside Gotham and gets out in a rain shower. It is Dr. Strange; waiting for him is Keepsake. Keepsake launches into a complaint about Harley and Ivy and threatens to go straight to the GCPD. Dr. Strange pulls out a firearm and shoots him. Keepsake topples over the side. Dr. Strange drives off while a pair of red-gloved hands pull Keepsake’s body from the water.

In Little Santa Prisca, Harley is in her apartment musing on how she does not generally like mementos – other than those connected to Ivy. The doorbell rings and Ivy is waiting in a new green dress. Ivy marvels at Harley’s membership in the Bat-Family, accusing her of going straight. They snicker.

Harley and Ivy head out to “Art After Dark” at the Gotham Museum of Art. Turning heads, they see Kevin and Sam also out on a date. Harley gushes at meeting Sam and proceeds to talk nonstop until, in her enthusiasm, she jostles Sam. As a result, Sam spills her wine and then stomps off to the bathroom, Kevin in tow. Ivy walks Harley off with a story about a missing royal wedding gift from the early modern era. They arrive at a red rope barricade obstructing a door. Ivy takes Harley in to see the Rose Diamond and, to Harley’s dismay, proposes that they steal it. Guards enter and Ivy attacks. One of them fires a shot that injures Ivy’s vines, and she grows enraged. Lethal thorns sweep towards the guard, but he is protected by Harley, who takes a serious swipe across her right palm. Ivy comes to her senses and rushes over to Harley as Kevin and Sam enter.

Harley and Ivy argue; Ivy taunts Harley, and Harley leaves with Kevin and Sam in anger, frustration, and pain. Later, Kevin is walking Sam home. Sam probes a bit, asking if Kevin could be surprised at the night’s events given that the protagonist is one Harley Quinn. He responds with an earnest profession of Harley’s redemptive acts, and they end up kissing. Elated, Kevin departs, rounds a corner, and is accosted by Keepsake pointing a firearm.

On a Gotham pier, Harley is looking out over the moonlit water. Ivy joins her. They speak in more open and generous terms than in their previous two conversations. Ivy apologizes, but Harley waves her off, apologizing in turn for assuming they could just pick back up where they left off despite the transformative journey Harley has traveled in the interim. Harley gives Ivy a gift of an envelope and some red & black dice purchased from a convenience store. Harley explains that Ivy is only to read the letter when Ivy gets where she is going. Ivy is confused and Harley explains that while her favorite life path is the one that has brought them together, Ivy needs to find her own way. And Harley is ready to let her go with a passionate kiss.

Analysis: Despite the fact that in Harley Quinn #10 little of the frenetic action we might associate with Harley Quinn occurs, I found myself enjoying it tremendously. The dialogue is sharp, original, and funny. The emotional resonance of the final scene is especially astonishing, as writer Stephanie Phillips stages a valediction with great emotional resonance. I am a fan of the character of Harley Quinn since Day 1 (Batman: The Animated Series is one of my most important TBU influences), and here I found myself believing in what she was expressing. Harley’s capacity for deep character analysis has never been in doubt – she is both impossibly brilliant and highly trained in exactly this capacity. But here she turns her powerful lens on herself and shines the light into some of her darker recesses. She knows she cannot be with Ivy right at the present, but that does not in any way diminish her love.

Under Phillips’s care, the character of Harley Quinn has shown bravery equal to almost any member of the Bat-Family. Here again, Harley shows a willingness to sacrifice for the good of another and for future Ivy (who will, she believes, be better off with an Ivy who has made her own way as well). Harley Quinn fans have been waiting for some time to see a writer explore the Harley-Ivy relationship with the seriousness and depth it deserves. In this book, the fans’ legitimate expectations are richly rewarded.

Laura Braga’s art is surprisingly effective for this issue. Both Harley and Ivy are well-represented, and the red-black theme in the dialogue is picked up nicely in Harley’s outfit. The muted blue-ish tones also contrast well with Ivy’s typical luminous green. While the main artist Riley Rossmo is a good choice for a Harley Quinn book in general, here Braga’s more restrained and realist style is essential to carrying the effect of the book. (Credit to the creative team for understanding that Rossmo’s style might undermine the themes and tone of this specific issue).

Finally, as the hosts of TBU Comic Podcast noted, Kevin is almost impossible not to like. He is sweet, loyal, and thoughtful. Everyone needs a Kevin.

This is a terrific book. Phillips is changing Harley Quinn before our eyes, and I love this version.