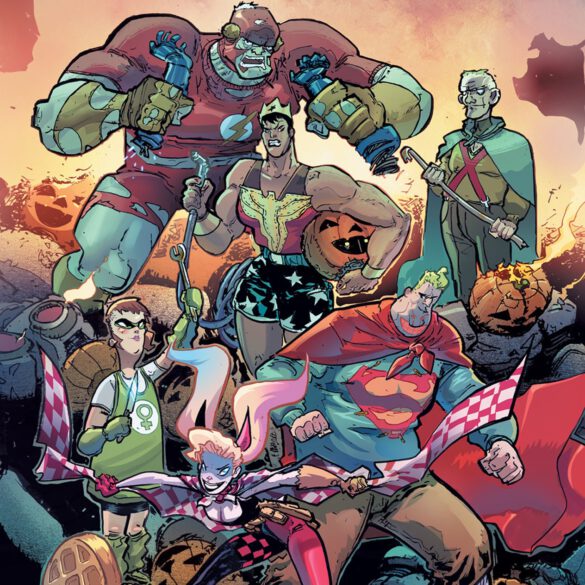 Synopsis (spoilers ahead): Harley Quinn #12 begins with a flashback to two weeks ago, when a mysterious villain kills a man named Martin Spinelli, who was acquitted of the murder of a nine-year-old boy. The same villain has also saved Keepsake from death at the bottom of a vat for the apparent purpose of delivering “justice” to Harley Quinn.

In the present, Harley is imagining how various DC superheroes would escape the speeding train and save Kevin to boot. She frees herself and locates the bomb underneath the train. As the seconds tick down, she struggles to solve this trolley/word problem. The train explodes mere seconds before it runs over Kevin. He agonizes for a brief moment as we see Harley appear behind him. They realize that they need to race back to the train station to stop Keepsake and his “robot pumpkin army” from destroying Gotham. Keepsake is preparing to do exactly this before the members of Harley’s group therapy program show up. Led by Blane (Anne) they begin to lay waste to Keepsake’s army.

Harley and Kevin show up and are confronted by a robot pumpkin outside. Before the robot can attack, it is ripped to shreds by Solomon Grundy. Led by Anne, the entire team advances on the helpless Keepsake. Harley stops them and argues that killing Keepsake will not help any of them heal. They agree to a no-kill rule, instead opting to leave Keepsake to his fate as the station begins to collapse around them. Harley and Kevin depart, and Harley reflects on the fact that she no longer feels alone.

Back at the train station, Keepsake is pulled from the burning rubble by a villain who seems to be named “Verdict.” This is the same villain who saved Keepsake two weeks ago. She aims a gun at Keepsake and fires.

Analysis: Harley Quinn #12 is somewhat less original than most of the books in the series thus far. I found myself a bit surprised that her resolution to the trolley/word problem resembled the basic structure of any superhero escape from the “train-with-the-bomb-strapped-to-it” trope. I suppose Harley is just as entitled to a basic superhero escape as anyone else in DC Universe, but I was hoping for something clever and original and uniquely Harley.

Similarly, Harley’s speech to the members of her therapy program is certainly one comic readers and moviegoers have heard many times (the emptiness of revenge as a personal pursuit is core to Batman himself and many other superheroes). Perhaps writer Stephanie Phillips is intentionally alluding to Batman as, in deciding to leave Keepsake, Anne utters the refrain made famous in the climax of Batman Begins (“I won’t kill [you] … but I don’t have to save [you] either.”).

It is nice to see that Phillips has more rogues up her sleeve than Keepsake, who has never been much more than comic relief for a hero of Harley’s talents. Will Verdict do more to challenge Harley? I look forward to finding out.

I am unsure if this is the end of the Keepsake arc, but there’s a bit of energy and movement that seems missing from Harley Quinn #12. There’s still much to like about this book, and I remain excited about the character and her ongoing redemption narrative.