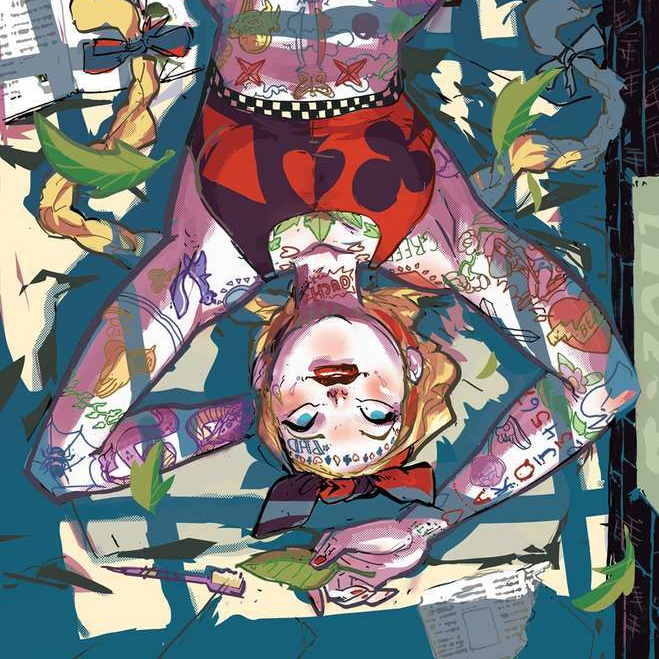 Overview: In Harley Quinn #14, Kevin doubts Harley Quinn’s arrest and incarceration for murder, but Batwoman is on the case.

Synopsis (spoilers ahead): Harley Quinn #14 begins in the Gotham City Courthouse, as Batwoman swoops in and examines a deceased judge who has had an eye removed. She discusses a series of unsolved murders with Oracle, although Oracle reminds Batwoman that the murders are “solved.” By solved, Oracle means that Harley Quinn is in Blackgate Prison and charged with the crimes. Batwoman spots movement on the roof and swoops up. She engages Verdict in combat and smashes Verdict’s wrist, but Verdict escapes.

In Blackgate, Harley is having a difficult time. She muses that prison was more tolerable when she was guilty of the crimes for which she was incarcerated. Kevin comes to visit her and recommends she acquire an attorney. Harley storms off when she realizes that Kevin has real doubts about her innocence.

In Kevin and Sam’s place, Kevin is preparing eggs and pancakes for breakfast. They debate Harley’s culpability. Sam is dubious. Kevin defends Harley, but the distraction results in burnt pancakes. Sam goes into the bedroom to change and do her physical therapy. Kevin follows and inquires about her injured arm. She rebuffs him rather harshly, and as she leaves for work, Kevin asks her if she can engage some of her former coworkers in the Gotham City Police Department to help Harley.

Back at Blackgate, virtually all of the inmates try to pick a fight with Harley. She shows admirable restraint but in the end, is pushed beyond reason and begins brawling. Just as the shivs come out and things look dicey for our hero, Batwoman swoops in, grabs Harley, and they escape.

Analysis: Thus far, I am really enjoying the Verdict arc. Too much of the Fear State arc felt forced for Harley; in contrast, the Verdict arc feels like writer Stephanie Phillips has more freedom to plan and position her characters and themes however she chooses. I very much appreciated the showrunner approach previous Batman writer James Tynion IV took, but there’s little doubt that it constrained some of the books in the Batman Universe. And if there is one thing we know about Harley Quinn, it is that she cannot be contained.

I absolutely love Kate Kane’s Batwoman as a character, and I am super excited to see her introduced into the Harley Quinn book. It is exciting to have two prominent queer women characters interacting in one of the most widely read books in the DC Universe – especially where here, unlike with Ivy, both are at least nominally part of the Bat-Family.

Regular readers of these reviews know that I am not in the target audience for artist Riley Rossmo’s aesthetic, and the depiction of Batwoman is downright painful. She looks like a corset has been applied so tightly that it has forced a literal mane of red hair to sprout from her ridiculously pointy mask. But that is about the only negative I can muster for this book right now!

The heavy hints Phillips drops about Sam’s true identity are also highly effective dramatic irony and ratchet up the tension. Like Harley, I find myself feeling quite protective of Kevin – is Sam using him solely for the sake of framing Harley? Or, like us, is she drawn to his kindness and his ferocity in defense of his friends? I cannot wait to learn the answer.

The Verdict arc is exciting so far, and the addition of Batwoman can only lift the book even higher.