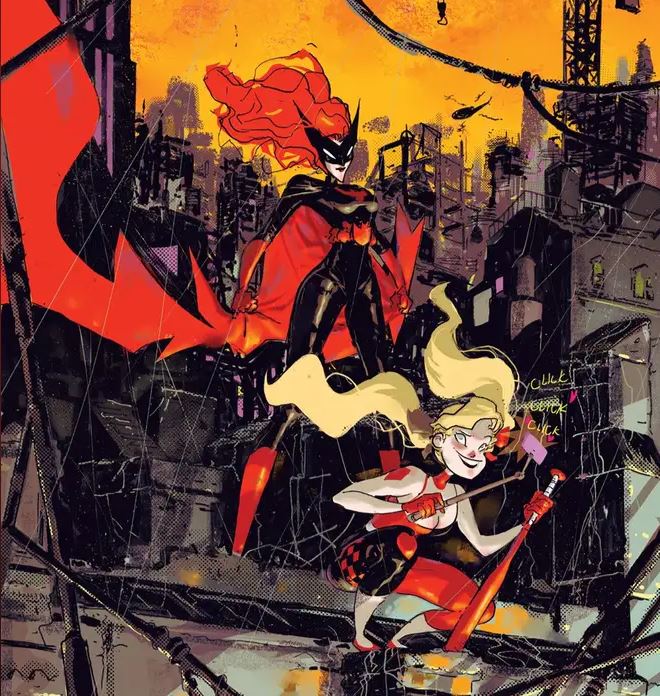 Overview: In Harley Quinn #15, Harley and Batwoman team up to locate the villainous Verdict.

Synopsis (spoilers ahead): Harley Quinn #15 begins at the Gotham City Police Department, as Officer Shaw checks the evidence box linking Harley Quinn to the recent homicide spree. She does not understand why a malfeasant as experienced as Harley would leave so much evidence, but the detective on the case rebuffs Shaw’s inquiries. As they argue, he gets word that Harley has escaped Blackgate Prison.

In disguise, Harley enters a burger joint and orders a quantity of food, which she shares with Batwoman on the rooftop. Batwoman states that she knows that Harley is innocent, and the two discuss the crimes. Batwoman then states that she will break into the GCPD evidence room. Harley pleads to go with but is rebuffed by Batwoman, who subsequently confesses to Oracle that there’s little chance of Harley staying out of the affair.

Inside of the evidence room, Batwoman goes through the same evidence box and discovers traces of fertilizer. She is apprehended at gunpoint by Officer Shaw, only to have Harley materialize behind Shaw because she was bored. Batwoman and Shaw begin fighting, but eventually Batwoman convinces Shaw to hear her case in defense of Harley.

Batwoman suspects that Harley knows where to find Verdict. She is right, and all three attempt to take down Verdict. They gain the upper hand, but Verdict presses a detonator. In the aftermath of the bomb, Verdict escapes. Through all of this, Harley’s inner monologue is a fascinating exposition on masks and the ways in which people, including her, use masks to bind and manage their pain.

In Kevin and Sam’s apartment, Kevin opens the bathroom door to see a bloodied and masked Sam, confirming for the audience that Sam is Verdict.

Analysis: I continue to appreciate the Verdict arc. Batwoman and Harley make an excellent team here in Harley Quinn #15. It is fascinating to see them as a couplet (not a “couple!”), especially because while Batwoman is another queer redhead to whom Harley is obviously attracted, Batwoman is extremely different from Ivy. The dynamic between the two is equally different. Thus far, Batwoman mostly seems to adopt Batman’s benign exasperation with Harley, but it will be interesting to see if the relationship deepens emotionally.

Harley’s analysis of masks and masking is complex and benefits from multiple readings. I have always found masks fascinating, both literally and metaphorically, and it is terrific to learn Harley’s perspective on it. Writer Stephanie Phillips reminds us of Harley’s training and her brilliance, and there is much to contemplate in the way Harley analyzes her past in ways that have obvious relevance for all of us who mask as well.

I do not generally comment on artist Riley Rossmo’s work in Harley Quinn because I do not like the cartoonish style and the reliance on circles and soft lines – but that is mostly a personal preference. However, some of the work in this issue feels rushed; Harley honestly looks like a Rugrat in her disguise.

The Verdict arc is rich and compelling, and I devoutly hope Batwoman sticks around for a few more issues.