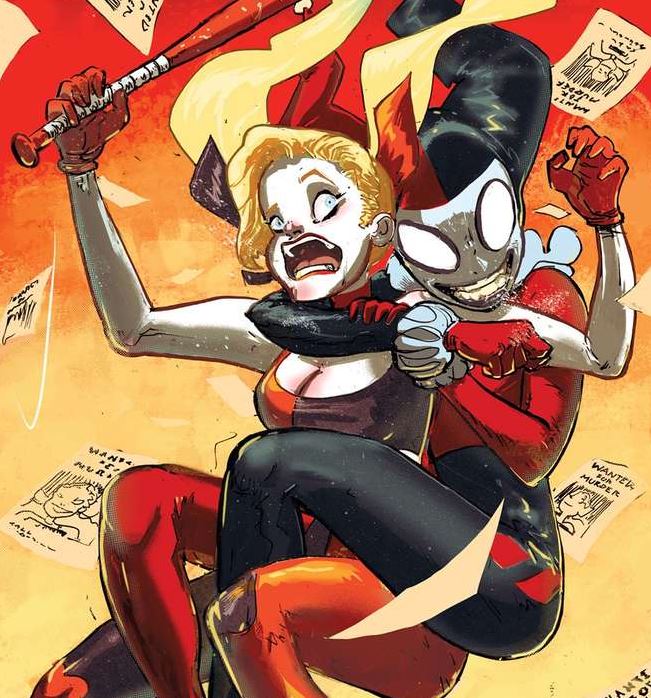 Overview: In Harley Quinn #16, Sam confesses everything to Kevin only to leave him with an awful choice.

Synopsis (spoilers ahead): As Harley Quinn #16 begins, flashback to the early days of Harley Quinn, who has stolen a car and fires a gun as she speeds off. The unseen narrator is reminiscing about this Tuesday night as Harley drives off of a pier. She is rescued from drowning by Batman, who then delivers her to the GCPD. Inside the GCPD, Harley is singing loudly. A younger Sam is arguing with her partner Gary about Arkham Asylum and its capacity to rehabilitate. Sam and Gary then get tagged with transporting Harley Quinn to Arkham and they set off.

Flash forward to the present in Sam’s bathroom, where Kevin has pieced it together. He now understands that Sam is Verdict and that Verdict framed Harley. Kevin starts crying in the kitchen as Sam begs him for a chance to explain. Sam continues her recollection.

In the back of the van, the SWAT guards reveal themselves to belong to Joker. They ask that she make the escape believable. She obliges, and in the ensuing mayhem, she kills both of the guards and Gary, sitting in the passenger seat. Sam is wounded and the van crashes. In the hospital, a detective warns Sam to cease asking questions about the escape. Sam knows that she is being gaslit and limps down the darkened hallway to hear the detective discussing the payment with the surviving guard. Sam, outraged, returns to her room.

She seethes until she can take it no longer, returns to the guard’s room, and strangles him with a wire. Flash forward, and Sam finishes her story, stating that when Harley returned to Gotham, Sam could not tolerate Harley calling herself a hero. Kevin is staggered that Sam murdered the surviving guard, and Sam points out his hypocrisy as a former Joker clown. At that moment, Harley bursts in and tells Kevin her entire story. Sam bursts out of the bathroom and fires a handgun, declaring Harley “guilty.”

Analysis: As the Verdict arc draws to a close, the rogue’s full backstory and the source of her grudge against Harley must be related. The flash sequences are plotted straightforward enough, and writer Stephanie Phillips happily avoids taking too many liberties with chronology in Harley Quinn #16. I must admit that I missed Batwoman’s presence and energy, as her time in continuity with Harley seemed far too short. I sincerely hope these two team up again in the near future, although from a character development perspective it will also be important for Batwoman’s behavior with Harley to diverge from Batman’s benign exasperation. (Batwoman is very different from Batman, as is Kate from Bruce, so it is not believable that she would relate to Harley in the same way as Batman. Her queer identity is only part of this, although it is important and Harley indeed comments on the sexual tension as she pours out her story to Kevin).

One of the strongest features of the book is the way in which Phillips stokes a dramatic tension for the audience regarding Harley’s redemption arc. Fifteen issues into the run, the audience has likely gotten comfortable regarding Harley’s goodness and her membership in the Bat-Family. Phillips wants to trouble this comfort, and she does so in a graphic fashion by reminding us that Harley is a murderer. This reminder is critical because even those who adhere to the notion of redemption from evil might want to reject the notion that it comes free or easy as time passes.

Here is one final random note: The main cover art from Riley Rossmo features a badly incorrect grappling hold from old Harley Quinn on present Harley Quinn. Perhaps this is intentional? If not, I mention this only because Phillips trains in combat sports, and I wonder if this bothers her!

Batwoman departed the scene too quickly, and it feels a bit as if the creative team is hurrying to finish the Verdict arc. This nevertheless remains an excellent book and a compelling arc.