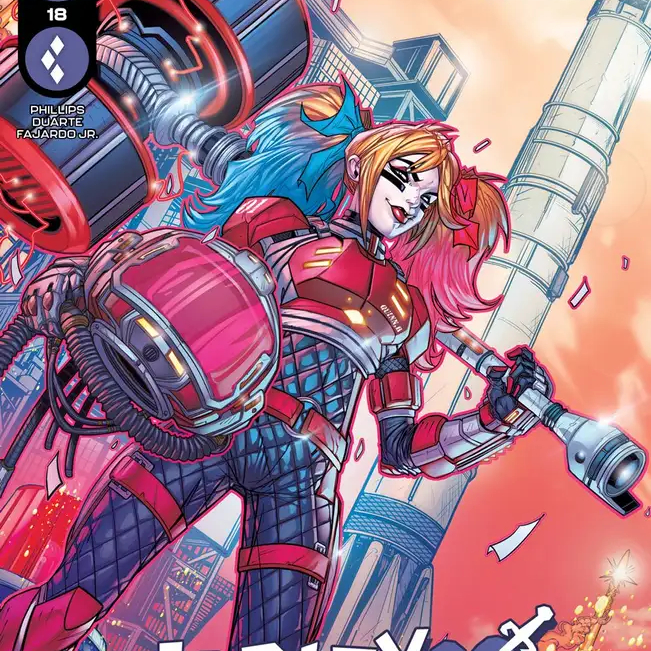 Synopsis (spoilers ahead): As Harley Quinn #18 begins, Harley plummets past skyscrapers into an indoor swimming pool. She is confronted by Killer Frost, who is quickly joined by Bronze Tiger. After some banter, Harley does a handspring over the side, bounces off of a restaurant awning, and heads inside. She grabs a breadstick and runs through the restaurant with Frost and Tiger giving chase. She is finally apprehended by Dreadbolt, who knocks her unconscious.

Harley regains consciousness and finds herself seated in front of Lashina of Apokolips. Lashina tells Harley that she has no intention of killing her but also calls for Verdict, who appears and immediately threatens Harley. Luke Fox appears and asks Verdict to put down her firearm.  He apologizes for her rough introduction to the group and begins to walk with her through the grounds as he explains. He wants to take on systematic issues like racism and homophobia without feeling like a hired gun (which he says he did as Batwing). A retinal scanner completes an ocular pat-down and they enter a geodesic dome.  Inside is a spaceship that Luke says he wants Harley to take to the moon.

Apparently, Element X is contained inside an abandoned Justice League base on the moon, but something from the Dark Multiverse is threatening it. All other Gotham-based heroes are fighting Deathstroke, so Harley is the one tasked with the trip. Luke hands her the written offer and the proposed compensation and Harley accepts. Task Force XX, which now included Solomon Grundy, takes off for the moon. The ship reaches orbit but an emergency ensues when Luke informs them over the comm that a missile has been fired and is tracking them.

Analysis: Generally, outer space narratives are not my preferred genre within the Batman Universe. The cityscape of Gotham is so critical to Batman and the Bat-Family, I find it difficult to locate the characters and narratives outside of the urban landscape in which Batman and Robin originally appeared. Harley too seems a creature of Gotham, first as Harleen Quinzel, then as a Rogue, and now as a full-fledged member of the Bat-Family.

So, in fairness, I am probably not the right audience for the Task Force XX arc. That said, writer Stephanie Phillips continues to give us the hilarious, dynamic, and delightfully profane Harley we see in this book. (Harley sneaking garlicky breadsticks into her spacesuit and chowing down before launch is especially amusing). I also appreciate the artwork and rendition of Harley from Georges Duarte, although no one illustrating right now surpasses Jorge Jiménez’s vision of Harley (currently seen in the pages of Batman).

This is not the Harley narrative I am looking for, but fans of Phillips’s Harley will no doubt find something to appreciate here.