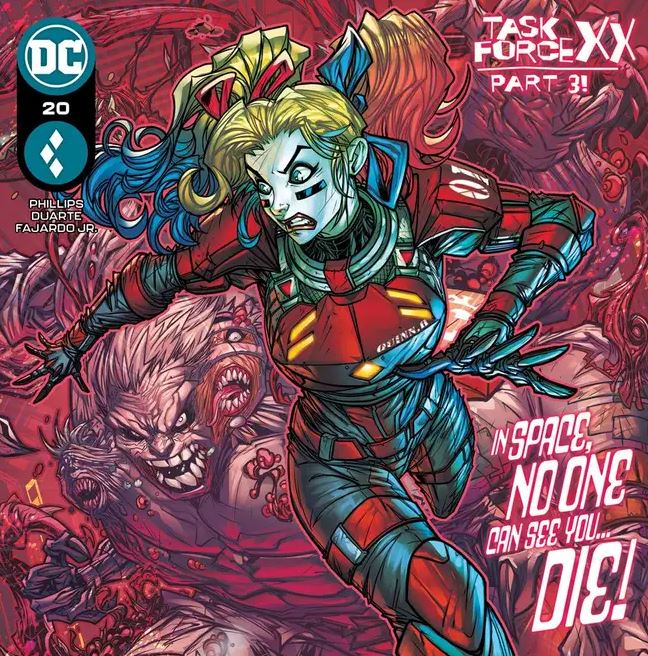 Overview: In Harley Quinn #20, problems accelerate for Task Force XX and Luke Fox on the space adventure on the moon.

Synopsis (spoilers ahead): As Harley Quinn #20 begins, Luke reveals to Task Force XX that it was he who sent Element X to the moon. The team discusses their options and bickers over who is in charge now that Lashina has been overtaken by Element X. Bronze Tiger draws his sword, and Verdict pulls a gun and aims it at him. Verdict fires and hits Solomon Grundy, which enrages Harley enough to send her after Verdict.

Lashina appears on the scene and chides the team for fighting with each other. Task Force XX is confused because she is apparently possessed by Element X and yet seems perfectly lucid. Solomon Grundy reaches out and is grabbed by a tendril from Lashina. Appendages and faces begin to grow out of Grundy, and he begins attacking the team.  The floor collapses, and Task Force XX plummets down to the next level, which is some kind of forest of dead trees. The Lashina-Grundy-thing speaks and asks existential questions (“What am I?” “Why do I exist?”). Harley takes the questions seriously and discusses possible answers from Aristotle and Žižek. The Lashina-Grundy-thing is interested for a moment before laughing and indicating a plan to consume every person on earth after finishing with Task Force XX.

It seizes Killer Frost but then suddenly drops her and rushes off. It turns out that Frost has the ability to drain life force. The Lashina-Grundy-thing brings the systems back online in the base so that it can transport itself to earth. Back on earth, Luke Fox is rushing around to prepare for the monster’s arrival. He is apprehended by military police, but before they can complete the arrest, the Lashina-Grundy-thing appears and begins subsuming them.

Analysis: The alien life-form that exists by integrating human prey is itself a classic science-fiction trope (see, for example, the 1989 movie Leviathan and many, many others). So the story does not feel especially original, but there is always something worth engaging in writer Stephanie Phillips’s narratives. Harley’s insistence on treating Solomon Grundy as a being worthy of respect and dignity is one of my favorite elements of the Harley book under Phillips, and here it nearly gets her killed or worse.

A Harley story set on the moon remains a bit far-fetched for me, but hey, this is comics, and it is hardly as if space adventures are off-limits.

As the story arc continues, the weekly nature of the book is wearing me down along with a Harley narrative that I don't find appealing. Certain Harley fans will still find something to appreciate, even if I am not among them.