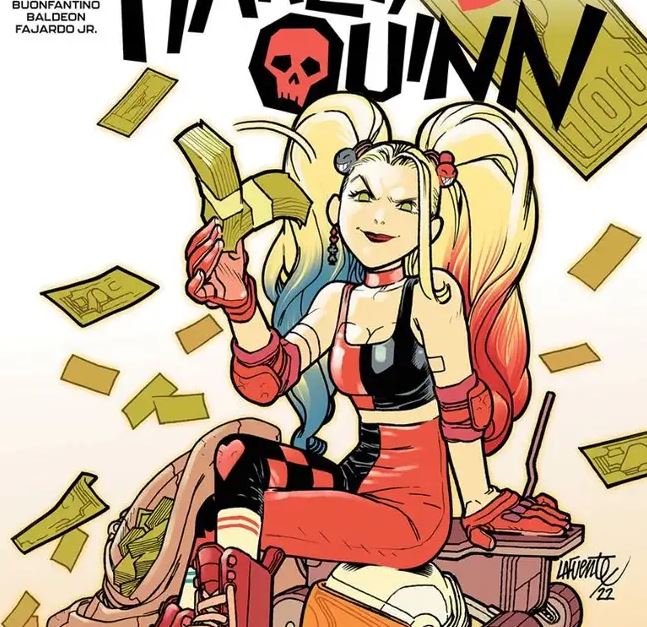 Overview: In Harley Quinn 2022 Annual #1, Harley saves the day and enjoyes some luxe with Kevin.

Synopsis: Task Force XX is back on earth and battling the military police under the control of the Grundy-Lashina-Thing. The team realizes the battle has been a distraction and realize that the main monster is headed to Blackgate Prison.  They plan to have Killer Frost use her life-draining power.

The Grundy-Lashina-Thing arrives at Blackgate and predictable mayhem ensues. Task Force XX appears and begins battling the law enforcement officers and prisoners infected by the alien. Harley miscalculates and is about to be touched by an infected prisoner but Verdict bails her out. They begin looking for the main monster but are stopped by Orca, who is also under the control of the monster. Harley begins cracking all sorts of whale puns as she battles Orca.

Verdict keeps Orca busy while Killer Frost and Harley rush off to find the monster. They do and begin to fight. Killer Frost leaps in and finishes off the Grundy-Lashina Thing. Grundy and Lashina are restored, as is order to Blackgate Prison. Luke and Harley debrief and Harley informs Luke that she is keeping her new mallet, which she has named “Jeff.” Task Force XX enjoys a well-deserved meal.

Analysis: This is a pretty basic ending to a pretty basic monster caper. There’s not much to be done here from a narrative standpoint, and writer Stephanie Phillips does the best she can to button up the story. Harley is her usual dynamic, clever self, but the underwhelming backdrop lacks the resonance and power of the longer narratives in the title. It’s cute but not much more than that, although I did get a chuckle out of Harley naming her new weapon “Jeff the Mallet,” which is about the Harley-est thing possible.

Story #2: “What Happens in Vegas” by writer Stephanie Phillips and artist David Baldeon

Synopsis: Harley is enjoying some luxury in Las Vegas with the money she earned on Task Force XX. Kevin is with her, practicing some yoga on the terrace of their hotel room. They talk and then the doorbell rings. A man in a black suit is standing there and brandishing a firearm. Harley disposes of him but checks his wallet and sees FBI identification. They are puzzled by his purpose until an alien-looking “thing” speaks from a corner of the room, informing them that the FBI is after it.

Analysis: This backup story in Harley Quinn 2022 Annual #1 serves to set up the next arc in the title. That is about all there is to say about it.

Task Force XX was not the strongest arc, but Phillips did the best she could with it.