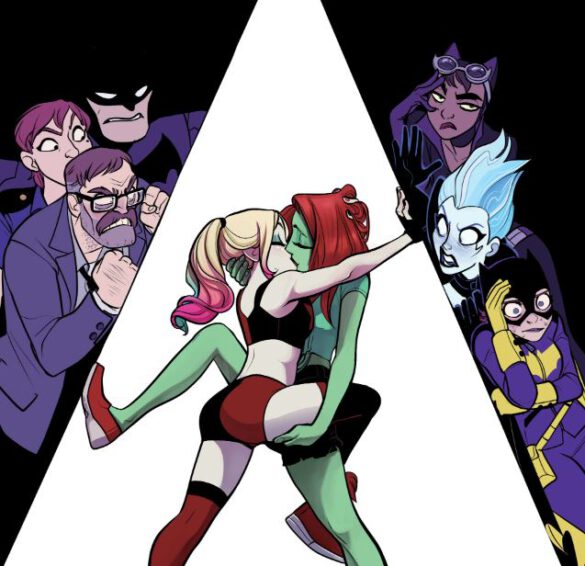 Overview: Set after the events of the second season, Harley Quinn and Poison Ivy start their tour in Harley Quinn: The Animated Series: The Eat Bang Kill Tour. This tour is written by Tee Franklin with art by Max Sarin and takes place before season three, which can be seen exclusively on HBO Max (for now. Sorry I had to).

Editor’s Note: This collected edition includes all six issues of the miniseries Harley Quinn: The Animated Series: The Eat Bang Kill Tour, which had its first issue released in September 2021 and the final issue released in February 2022. This review focuses on the story as a whole rather than the individual issues that made up the limited series.

Synopsis (spoilers ahead): Harley and Ivy are on the run from Commissioner Jim Gordon and the GCPD because of all the damage that Harley caused to Gotham (as seen in season two). Gordon wants to get on the good side of the President of the United States and vows to bring Harley to justice. The girls are able to get away, but Poison Ivy becomes upset at the way she is portrayed in the media after leaving Kite-Man at the altar. Harley comes up with the idea of a road trip to cheer up her girlfriend, but Gordon has a tracker on them.

The girls head to Catwoman’s apartment to ask Selina if she can watch Harley’s hyenas. While they are discussing that, Gordon and the GCPD show up and try to take all three of them into custody. Gordon is extremely reckless and is about to toss a grenade right in the direction of Harley and Ivy, but Batman intervenes. Ivy and Quinn escape and decide to hightail out of Gotham.

They make a pitstop in Bludhaven but are easily recognized. Batman alerts Nightwing that they are in his town. Nightwing catches up with them, and the girls are ready for a fight. He lets them go because he wants to stop Jim Gordon, who has been so out of control.

Meanwhile, in Detroit, a villain named Mephitic takes on Vixen, Cyborg, and Zatanna. Mephitic is a villain made up of poisonous toxic chemicals who takes out the heroes and makes the bold claim that they are the most powerful poisonous villain. Harley and Ivy decide to head to Detroit and take this villain head-on.

While heading to Michigan, they stop off at Nightfall’s house and find that Livewire has been staying there. They then decide to leave there and stay at a hotel. Bored and looking to blow off some steam, they go and take out their frustrations on some high-powered, morally corrupt CEOs that were staying at the hotel. After that, they come across Vixen but are able to escape. At the hotel, Harley and Ivy have a fight because Harley is upset that Poison Ivy won’t open up to her. Harley storms off and decides to go to a nightclub. While she is there, she is attacked and kidnapped by Mephitic.

Back at the hotel, Ivy comes to terms with the trauma she suffered as a child thanks to her imagining Dr. Harleen Quinzel and decides that she will open up to Harley because she truly loves her. She heads to the club but finds out Harley was kidnapped. Ivy needs to ask Vixen for help because only Vixen’s powers will be able to locate Mephitic’s lair.

Vixen has reservations about helping Poison Ivy, but her girlfriend, Elle, convinces her to help because she can tell that Ivy and Harley share a similar love that they have. At the same time, Mephitic is conducting experiments on Harley as she tries to buy time for Ivy to find and save her.

Vixen and Poison Ivy find the hideout, and Ivy heads in to save Harley. Mephitic is about to take out both of them. At the last second, Livewire, Vixen, and Zatanna show up and help defeat Mephitic, who is revealed to be a person that was full of toxic chemicals and gas because they didn’t clean themselves (even for this show, it’s a bit strange).

Jim Gordon shows up and is ready to finally bring in Harley Quinn and Poison Ivy for everything they have done, but Livewire zaps Gordon, which gives Harley and Ivy enough time to escape and drive off into season three.

Analysis: I am a big fan of the show, so I thought I would naturally be a fan of this comic series. I wasn’t. The show is very chaotic and fast-paced, and all the jokes land. I think those jokes work better on the animated series than on the comic page.

The writing feels more like fan fiction than anything connected to the show. In every issue, there was a moment when Poison Ivy would get mad at Harley and then say she could never be mad at Harley. Then, they would make up and be fine. It felt like forced conflict when it wasn’t called for. The Jim Gordon characterization is wildly different from the show. In the show, he’s kind of a loveable drunk goof, but here, he was more like an insane Rambo.

You do not need to read this series to be caught up on the show. If you’re interested in more Harley Quinn/Poison Ivy content, then there are better places to go.

This graphic novel collection misses the mark on trying to capture the magic of the animated series.