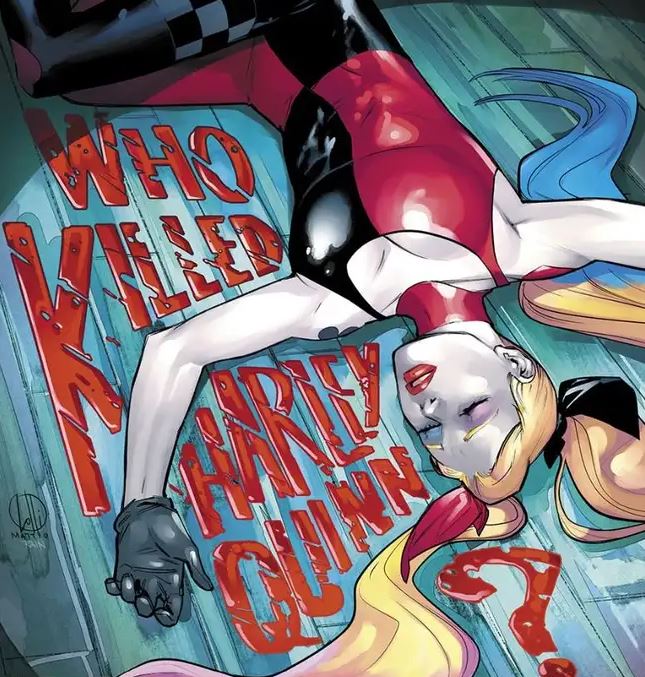 Overview: In Harley Quinn #22, the question is, who killed Harley? We may find out after a trip to the Lazarus pits.

Synopsis (spoilers ahead): As Harley Quinn #22 begins, Kevin is traipsing through snow-covered mountains. He is looking at a map before he is apprehended by ninjas and dragged into a temple. The leader, who looks like Harley Quinn in League of Assassins cosplay, stands and questions him at swordpoint. Kevin tells the woman, whose name is Angel Breaker that he is trying to undo death. She scoffs but examines the sled Kevin has lugged in. Harley’s body lies atop it.

Flashback seventy-two hours ago, and Kevin and Harley are trying to decide what to do with “Parry the Parasitic Alien.” Parry is sentient and indicates an interest in wearing Kevin’s face. Harley corrects Parry as one would a wayward dog. Harley shows Kevin her new purchase – a ferry boat. Kevin is concerned that Harley is frittering away the money she earned on Task Force XX. They argue, and Parry participates.

Kevin rushes on the boat after Harley only to find a wraithlike creature with some kind of gas or smoke. Harley collapses. Kevin tends to her, but she has no pulse. Kevin weeps as he cradles her lifeless body. Flash forward, and Angel Breaker initially refuses to help. Kevin is willing to die for Harley, and Angel Breaker agrees to lower Harley into the Lazarus pits.

The cave begins collapsing around them, and Angel Breaker flees. A hand finally bursts forth, and Kevin drags out a reincarnated Harley wearing a demonic, almost Joker-esque grin. She is ready to go after her murderer.

Analysis: Wow! I did not anticipate Harley dying and becoming the latest Batman Universe character to experience the Lazarus pits. The “Who Killed Harley Quinn” arc is off to quite a start here in Harley Quinn #22, and the banter with Parry the Parasitic Alien is suitably humorous (perhaps a play on ‘Perry the Platypus’ from the underrated Disney animated show, Phineas and Ferb?).

It’s sad to think that we only have writer Stephanie Phillips on the book through issue #28, after which the new creative team (writer Tini Howard and artist Sweeney Boo) will take over the reins. But it’s wonderful to see Phillips continue to represent the brilliant, hilarious, and outrageous Harley we’ve seen in her run. Apparently, artist Riley Rossmo has already completed his run, as artist Matteo Lolli will finish out the Phillips era. Although Rossmo was a good fit for the character and for Phillips’s representation, I never cared for his aesthetic and find Lolli’s a significant improvement (and for what it is worth, I have mixed feelings about Sweeney Boo. I think her style is absolutely a perfect choice for the next creative team).

The “Who Killed Harley Quinn” arc is off to an excellent start, and I’m especially happy with Lolli’s artwork.