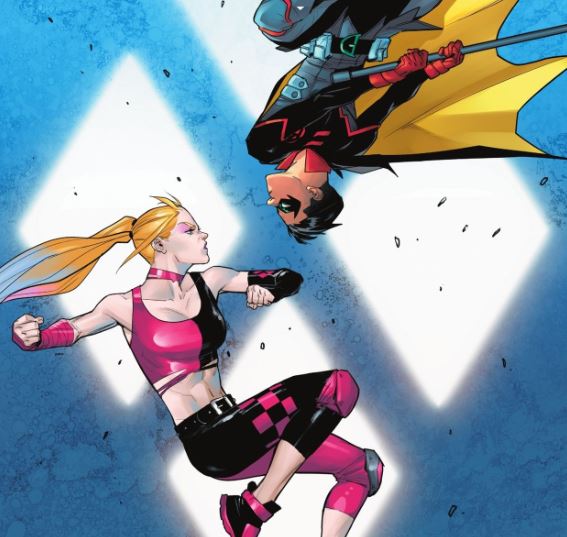 Overview: In Harley Quinn #23, post-Lazarus pits, Harley seems fine. Damian is not so sure. Maybe Harley isn’t, either.

Synopsis (spoilers ahead): As Harley Quinn #23 begins, Harley springs out of her coffin to a roomful of adoring cultists she names the “Quintessentials.” Kevin is confused and asks to speak to Harley alone. She banters, but Kevin turns serious and admits how frightened he was when Harley died. They embrace. Kevin questions whether the Lazarus pit has changed her, but she brushes it off. Suddenly, Robin (Damian Wayne) attacks.

Harley battles Damian and gains the upper hand. Over hot chocolate in her ferry kitchen, Robin explains that he was unwilling to take any chances with a former rogue emerging from a Lazarus pit. Harley explains that she was shot by a villain wearing a hood. She expresses some bitterness that after all she has done for Gotham City, she was murdered. Damian is reluctantly convinced that Harley is okay, and he leaves.

Harley stands in the kitchen, seething. She smashes the mug.

Elsewhere, a hooded, bandaged figure queries a trussed-up clown as to Harley’s whereabouts. The hooded figure shoots the clown.

Harley seethes quietly in her apartment. Sitting in between Bud, Lou, and Parry the Parasitic Alien, her smile is sharp. She muses that if Gotham really misses the old Harley, perhaps she should give the people what they want.

Analysis: Things seem to be moving quickly in this arc as writer Stephanie Phillips’ wonderful tenure on the book closes. The plot does feel a bit rushed, continuing that trend in Batman Universe books with writers coming off of significant books (Tom King and James Tynion IV on Batman, for example). Phillips has been careful with Harley’s redemption narrative throughout the book. She paced the character development slowly, telling mostly smaller stories within the larger Fear State context. This helped give depth and realism to Harley’s growth, which would not have been believable if crammed into a shorter time frame.

Juxtaposed against this careful pacing, it is a bit jarring to see Harley’s murder and resurrection via the Lazarus pit occurring in essentially two issues. Harley’s death and rebirth are dramatic turns in the character and feel awkward and discordant against the elongated character arc Harley had been traveling. That said, Phillips remains a talented writer, and the unfolding story in this specific arc is interesting. The Lazarus pit does feel a bit like a cheap means of getting at the question all Harley readers are asking: To what extent will her turn into the Bat-Family endure? Will she revert? The device of the Lazarus pit, in some sense, removes the critical choice from the character since the action of the pit changes people regardless of their intent or volition (see Jason Todd). Thus if Harley does turn villainous again, it might be through no fault of her own – a trope that is well-played in pop culture and horror genres (it’s the basic plot of Stephen King’s Pet Cemetery).

I am still loving the combination of Matteo Lolli’s pencils and Rain Beredo’s colors. The reds and blacks are softened against blue and grey tones consistent with Harley’s journey through death and resurrection. Her smile at the end is downright creepy – there’s no trace of the moony, cartoonish Harley favored by previous artist Riley Rossmo. This is a much darker arc, perhaps picking up on some of the stories told in the Harley Quinn Annual that tracked similar moods. Rossmo’s style would feel wildly out of place, and Lolli’s realistic, emotional linework is well-suited and appealing.

This is already a darker arc, but I suppose a story of Harley’s murder and resurrection should be. I like the story and the art, and suppose what I really want most of all is for Phillips to continue on the book. Like Harley, it seems I am destined for disappointment.