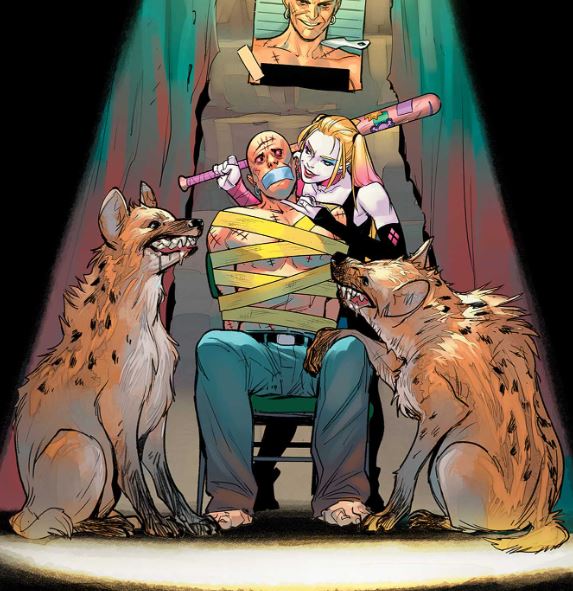 Overview: In Harley Quinn #24, Harley interrogates Victor Zsasz, while she sees the enemy, and it is her.

Synopsis (spoilers ahead): As Harley Quinn #24 begins, a frightened man flees Zsasz. He licks his blade and prepares for the kill. The Quintessentials (see Harley Quinn #23) interrupt him and immobilize him. Off they pop to Harley’s temporary lair. He sits, trussed, gagged, facing an angry Harley with her bat, with Bud and Lou in tow. She demands to know the identity of her murderer. Zsasz protests his ignorance, but Parry, the parasitic alien, steps in and threatens the removal of several of his vital organs.

Zsasz banters and observes that the “real” Harley seems to have returned. She rejects the idea but admits her confusion. She reminds Zsasz that at Arkham, he had a good sense of the pulse of the place. He admits that people have been disappearing in the warehouse district, and she whisks him to the scene of the crimes, donned in full Sherlock costume with a still-trussed Zsasz as her Watson.

Inside a building, Harley and Zsasz banter until a hooded figure from above attacks. They battle, and eventually, Harley gains enough ground to unmask her assailant. It is the Harley who Laughs.

Analysis: Writer Stephanie Phillips is closing her excellent run on the Harley Quinn book by branching out from the careful, layered sequencing in the first fifteen to twenty books. In her anger and confusion, Harley is rushing, and to some extent, the audience is along for the ride. It’s a bit peculiar to see a rogue like Zsasz get this much-sustained attention, but I suppose I am interested. (It might have been more fun, IMO, to see the brilliant minds of Harley and Jervis Tetch clash, but that’s ancillary).

In the hasty pacing, there are some misses. The “cereal killer” pun does not land even as irony and is beneath Harley’s wit. The notion that a character as complex as Harley is driven to such a precipice because “someone needs to pay” seems somewhat implausible, even if Harley’s anger is justified. Where is Kevin? He is usually effective as the calm to Harley’s storm. And while it’s always fun to see Harley play dress-up, the Sherlock Holmes schtick is forced and again does not work as irony.

The final reveal of the identity of her murderer is effectively framed, and the introduction of a character from the DC Multiverse and Dark Knights Metal does fit. While, as Zsasz points out, many in Gotham bear a grudge against our hero, it’s not clear who would be so hell-bent on taking her out. A Harley Who Laughs would, consistent with the Batman Who Laughs, always be out to kill the version on this earth.

I have a lot of feelings about this new villain, introduced right at the end of Phillips’s run. I am intensely fascinated by the Batman Who Laughs. While I think that the arc in Dark Nights: Metal did not do as much for the character as it could, the premise, cold-blooded predation, and above all, Jock’s stunning artwork made the character fresh and exciting. Although I do like artist Matteo Lolli’s linework (and Rain Beredo’s color tones are fantastic), there’s simply no way the dynamism and choler in Jock’s art can be matched here.

We are hurtling towards the end of the Phillips era on the book, and at times the plotting and dialogue reflect the rush. Still, Harley is the center of the storm, and it will be interesting to see how she grapples with her new formidable nemesis.