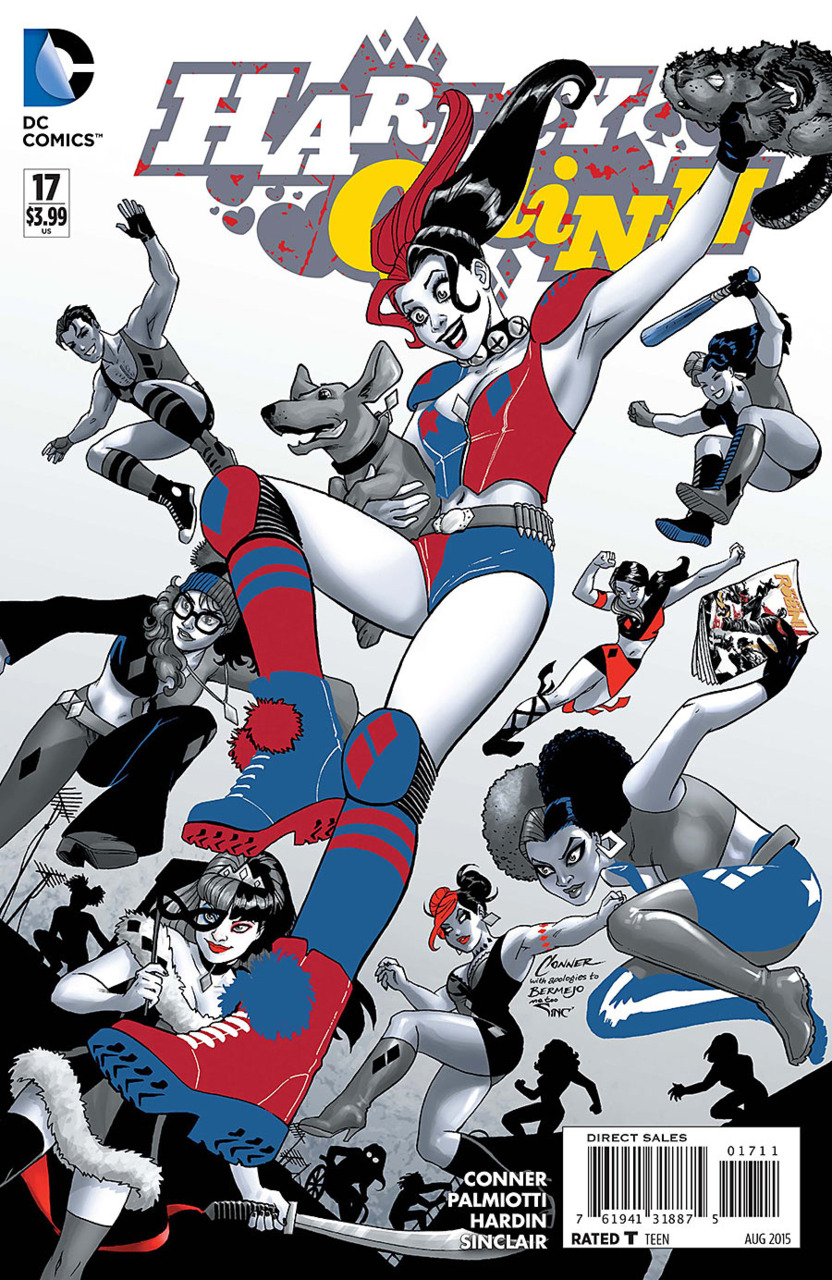 Now that Convergence is over we can go back to our regularly scheduled Harley. We got to meet the members of the Harley Gang in the Sneak Peek in Plastic Man and the Freedom Fighters Convergence #2 book. It sure is helpful to have that comic so you can keep the team members straight.

This book opens with a bunch of garbage can robbers from Dino’s Hardware trying to lift a heavy can into a van. Apparently whenever the cans are stolen the residents go to Dino’s to buy new ones. So Dino sends out thugs to make off with them. This time however the residents have contacted the Harley Gang for help. After making an unfortunate remark about the weight of the can the crooks are surprised when Harley jumps out of it. After being pummeled by Harley, the thieves try to get away in the van. However, the Harley Gang is waiting with a rocket launcher. The rocket misses the van but the crooks decide to take their chances with the police.

After the fracas Harley decides to visit the Mayor. She wants her team to be able to operate with impunity and has enough dirt on the Mayor to get her wish. However the Mayor sends a man to keep an eye on Harley to gather information on her activities.

Meanwhile, off the coast of Sheepshead Bay Captain Horatio Strong is untangling his fishing boat from some glowing seaweed. He eats some of the seaweed and begins to glow unnaturally. This isn’t going to end well.

Harley is having a romantic dinner with Mason Macabre. They tell about their childhoods and seem to be hitting it off. Unfortunately Mason is arrested on murder charges and is taken away from the restaurant in cuffs. Harley pays a visit on Mason’s mom who says she will get her son a great defense attorney.

Back at Harley Headquarters, Coach gives the team an assignment. Captain Strong’s wife has reported him missing and will pay the Harley Gang double their usual rate if they can find him. They send Harlem and Harvey to check the bars around the dock in Far Rockaway. After a few false starts they get the information that Captain Strong is in the men’s room. They go and check on him but he explodes through the door with vicious intent like a crazed Popeye.

The plot of this book is very straightforward and it is also drawn very clearly. I like the simplicity of these Harley comics very much. One issue with the cartoon-y style though is that some of the more gory details, like an eyeball flying out of a crook’s head, looks strangely out-of-place. The tone is fun and over the top, but sometimes wants to have the kookiness and realism both ways. I was particularly thinking of the confrontation with the Mayor. It just all seems very flippant and lighthearted, but also tries to be serious and dangerous. I think the tone of the book still needs a little fine tuning.

The Harley Gang also needs some work. I’ll complain about this once and ding this comic’s rating and then shut up about it, but the names of the Harley Gang are a little silly. The African-American woman is called Harlem Quinn, the Jewish woman is Hanuquinn, the Indian woman is Bolly Quinn etc. I think there could have been a little more imagination put into these. And with so many gang members its going to take some time for the individual personalities to gel. But, like I said, I’ll ding this issue for it and quit complaining.

All that aside, Harley is the insane kook I have grown to appreciate. She is sweet and dangerous, thoughtful and sexy, insane but resourceful. The series has some fine tuning to do but I’m confident that it will be enjoyable for some time.