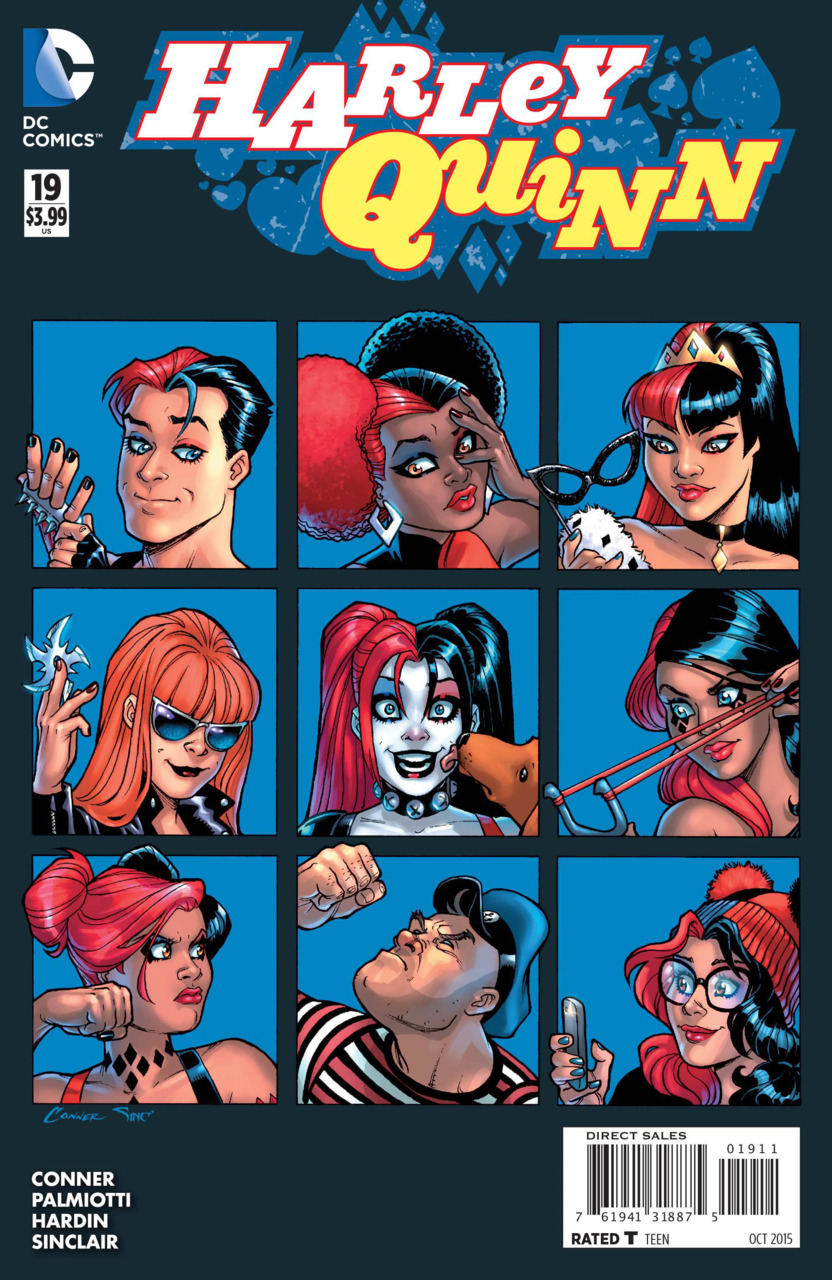 Harley has to save the members of her gang that are trapped at sea in the seaweed crazed Captain Horatio Strong’s boat in the next exciting chapter of Harley Quinn #19.

Our story opens in Staten Island. A very well built trucker comes home from being on the road when he runs into his wife, also just coming back from business in Chicago. They compare notes and realize they have gotten their wires crossed and have left their girls home for a week. They find a note from the girls which says they have moved to Brooklyn and joined a gang. Three guesses what gang.

The wife, Mrs. DiAngelis, decides to take off to find the girls.

Meanwhile at Harley’s house she, Tony, Eggy and Ivy are trying to figure out how to locate the missing gang members. Tony hacks the Coast Guard’s systems and figures out which boat is Strong’s. Since they don’t have a boat to get out to sea Harley gets on the scatapult and is hurled towards the fishing boat.

On the ship, Captain Strong has decided that he will spare the life of the one gang member who can swab the deck best. Harley descends onto the boat via parachute and batters the demon seaman. He is too strong however and Harley pulls two guns on him. He knocks one away and the remaining one is just a toy. Oops. This sends Strong into a fit of laughter but is forced to head below deck when the effects of the alien seaweed on his lower digestive tract result in an emergency visit to the head.

Eventually Harley decides that someone needs to go below deck to check on the Captain. One of the Harley Quints volunteers.

Back at Harley headquarters, Mrs. DiAngelis shows up armed with a wooden spoon demanding to be reunited with her daughters.

Meanwhile at the Brooklyn Assisted Living Center, an unscrupulous nurse is selling a one of the Center’s MRI machines out of the back of a truck. The sale is interrupted by Mr. Borgman who effectively applies the business end of a taser to the business end of the buyer. He runs off and Borgman criticizes the nurse who breaks down in tears.

Back on the boat, the gang is waiting for the results of the expedition below deck. Their questions are answered when Captain Strong’s meaty fist slams through the deck and the brave Harley Quint flies out of the resulting hole and flies into the sea. The gang throws her a life preserver and she decided to brave the sharks and stay adrift.

Captain Strong emerges from below looking like a Roman Gladiator, sans shirt and pants. A barrage of scatological euphemisms ensues. The gang readies for battle when Strong is hit by machine gun fire. It is Mrs. DiAngelis parachuting down onto the boat. Strong is knocked out while the happy Mother is reunited with her girls. They pitch all the magic seaweed and head back to shore.

Mrs. DiAngelis expresses her anger at Harley for what has happened to her girls. It turns out that while the young ladies said they were nineteen they are in fact fourteen. Harley points out they are big for their age. The girls defend Harley and tell their Mom all the good things Harley has done for them. All is forgiven as the crew heads back home.

Back at Headquarters Ivy has left and Harley and Eggy walk the Boardwalk. All of the costs they have accrued recently has put them deep in the red. Eggy says that Ivy spoke with Mason who is upstate, I believe still in jail. Also he reminds her of her appointment with Mr. Borgman the following morning.

The next day arrives and Harley, in Dr. Quinzel garb, flirts with the nurse on desk duty. He flirts right back and apparently likes her very much. She goes into Borgman’s room and is shocked by what she finds. Borgman has trussed and gagged the thieving nurse. They ungag her and she tells them she was selling the equipment because her daughter has been kidnapped and ransomed. She needs a hundred grand to hire a bounty hunter to retrieve her. Harley volunteers.

This issue is a little disjointed with a lot of side stories going on. However, the situation is finally beginning to open up. The Harley Gang is reduced by five which, if you have read my past reviews, I think is helpful. There were just too many members of the Gang to build relationships between any of them. Now we are down to a manageable level. The story with Captain Strong had a satisfying ending and, while it took too long to resolve, is now finally done.

The good news is that we have a new adventure cooking, Harley will be going to LA to rescue the kidnapped girl. Hopefully this will shake up the status quo which has been a little stale since Convergence. I wonder if the gang will come west with her or will the comic abandon them. I hope they go with because I’d like to see Harley with a well developed team of sidekicks rather than just using the Gang as an on again off again plot device.