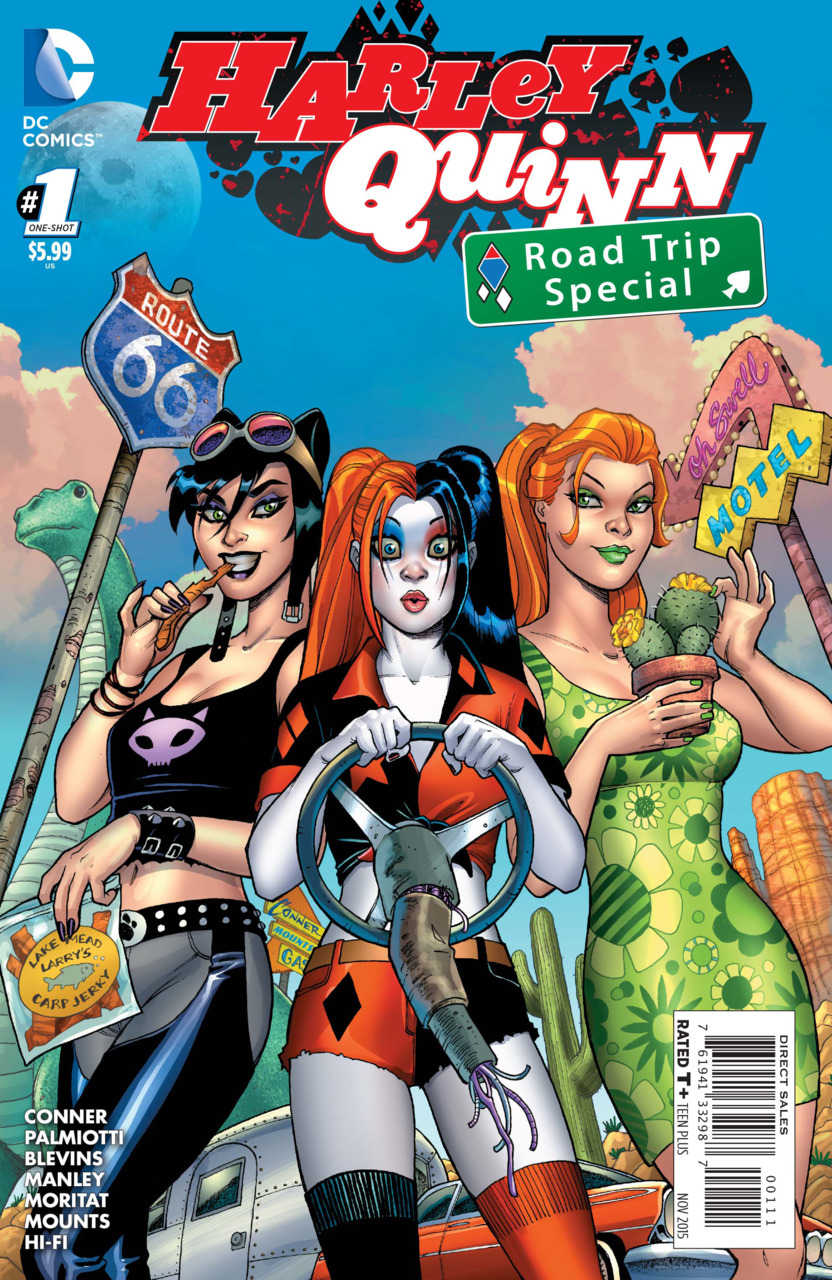 Harley, Ivy and Selina reek havoc in a cross country romp as they bring the ashes of Harley’s recently departed Uncle from L.A. to Long Island in the Harley Quinn Road Trip Special.

The story begins with the Sirens sunning themselves on top of their overturned trailer in the Utah desert waiting for someone to drive by to rescue them. Harley interjects and points out that starting the story with the three sunbathing in bikinis is just a ploy to get folks to buy the comic, not a bad plan but probably unnecessary. The story is best started from the beginning.

Dr. Harleen Quinzel is at her psychiatric office when her Mother calls telling her about the death of her favorite Uncle Lou. Harleen is upset and blames herself for not seeing him in so long (being in the Suicide Squad will do that to you). Her Mother asks her to fly across country to California to pick up Lou’s ashes and bring them to Long Island so he can be buried next to his dearly departed wife.

The trio joyfully meet in the Los Angeles airport and head off to their hotel which happens to have a rooftop pool bar. While Harley and Ivy are dancing they notice that Selina has gone missing. Selina, in full Catwoman garb, pays a visit to Darkwolf who is admiring his newly obtained necklace. Selina sneaks the necklace off the beastman and entices him with a marinated Wagyu Kobe rib eye which he follows out the window. Crunch. Sorry Darkwolf.

Selina rejoins her pals at the party where the trio engage in some fighting and watery shenanigans. The next day after eating some greasy fast food to deal with Harley’s hangover they make their way to Uncle Lou’s neighbor Sheila. Lou has given Harley a huge Airstream trailer and a red convertible and the three head east. En route the ladies pick up a traveling party in Vegas, have a sexy game of Truth or Dare and get run off the road by Darkwolf who is angry about losing his necklace. Darkwolf loses control of his car and Harley introduces him to the business end of a cactus.

With the trailer overturned, the ladies are stranded and wait for a car to come by. This is where the book started, with the three bikini-ed Sirens getting some sun. Finally, a pickup truck driven by a Native American comes by and our heroes climb in the back. They are offered water but told not to drink the stuff in the marked bottles, which of course they do. Apparently the bottles contain a peyote laced concoction which sends the ladies on an internal adventure. In the trip, Harley turns into a roast turkey and Ivy has an encounter with Batman. They wake up two days later on the road in the back of the convertible with Selina driving. Selina apparently avoided the peyote-ade and has gotten the show back on the road.

The Sirens cause havoc around the country and have a run in with Bizarro and Jimmy Olsen before they arrive at the Long Island cemetery where they will bury Uncle Lou next to Aunt Alice. The grave site sits at the top of the hill with a tree that had been hit by lightning. The dead tree makes Harley feel sad so Ivy brings it to life to make her friend happy, which it does. The ladies head back to Harley’s Pad and have a rooftop cookout with some of Harley’s gang while they toast Uncle Lou and their friendship.

What a crazy ride this one-shot is. It has everything we have come to expect from Conner and Palmiotti’s Harley Quinn: sexual innuendo; a hallucinogenic interlude; and lighthearted witty banter. But what makes this book special is that it is really about love and friendship, not fistfights and larceny. The relationship that Ivy and Selina have with Harley feels very real. Each of their characters are very specific and they fit together beautifully. And Harley’s lost relationship with Uncle Lou is very touching.

The one weakness I find in this trio is that while Selina and Ivy’s relationships with Harley are both different and well defined the interactions between themselves doesn’t seem strong. I know this is a Harley book and she is the center of the action, but it could be even stronger if all the pairings were strong. My model for this is the Birds of Prey where Oracle, Dinah and Helena all have unique relationships with each other. Selina and Ivy’s interactions could be unique as well.

This aside this issue is a joyful cross country dash with all the fun we have come to expect from Conner and Palmiotti. The art has been done by a number of artists, primarily Bret Blevins who makes the ladies look gorgeous. The peyote sequence is by Flaviano Armentaro. Pasquale Qualand and Jed Dougherty also lend a hand.