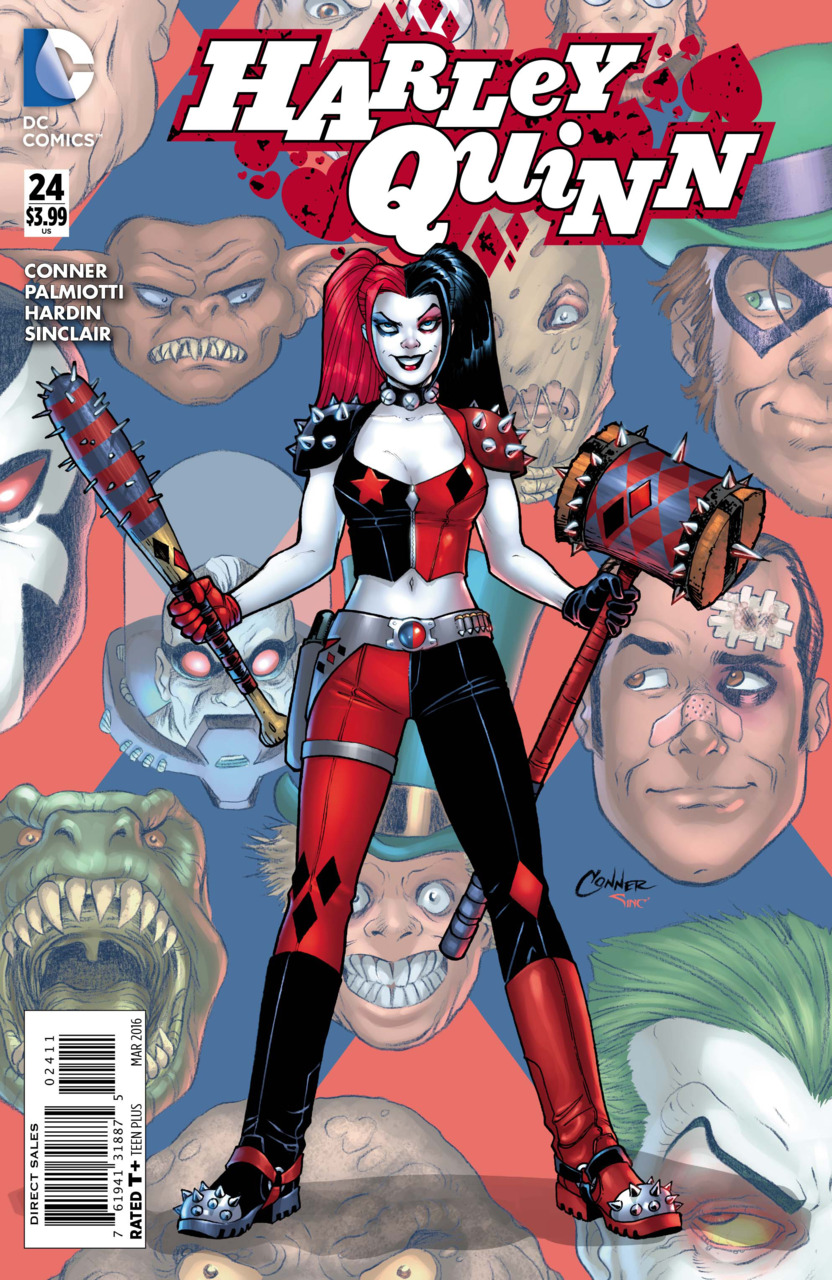 Harley and her gang fight off an attack on her headquarters by the Mayor as she tries to save her friend Mason who is getting friendly with an old friend of Harley in Harley Quinn #24.

Harley is trying to get in to see the Mayor but is being stopped by Cecil, the Mayor’s evil aid. The Mayor comes out and lets Harley into the office. Harley asks him to release her friend Mason, who has been transferred from prison to Arkham. The Mayor refuses reminding her that Mason killed his son, albeit by accident. He also points out that if Harley breaks him out of Arkham that there will be trouble. However, he also says that he had nothing to do with the prison attacks on Mason or his transfer to Arkham. Harley leaves but it turns out that the Mayor’s aid, Cecil has been behind Mason’s difficulties.

Back at Harley’s headquarters Harley starts putting together a plan to spring Mason from Arkham using her knowledge of the Asylum from her days as a psychiatrist there. As they discuss the plan the building is surrounded by some well-armed toughs, presumably sent by the Mayor’s office. Harley arms her crew and they all go down a secret elevator to the basement where they can begin their counter assault. Big Tony goes over to the theater to warn the people there of the attack. Harley’s crew begins taking out the gunmen at HQ and Big Tony takes care of those attacking the theater.

Eventually, after some violent hijinks all of the attackers are either killed or captured. Harley threatens the remaining vigilantes with death if they don’t tell her who ordered the hit on her. All but one quickly blame Cecil from the Mayor’s office. Harley despises the weakness of those that ratted out their boss and respects the one that didn’t.

Meanwhile at the Mayor’s office, one of the attackers crashes through the window. Harley is flinging them at the Mayor’s office from her roof using her catapult. The one attacker that didn’t rat out Cecil promises to never hurt Harley or her crew again so she spares his life. More bad guys are catapulted to see the Mayor. The Mayor declares war on Harley.

After the excitement Harley gets on a train upstate to break out Mason. At Arkham Mason, Mason is in his cell talking with the person in the next cell through an air vent. Mason explains his situation and says that he has a special girl. The neighbor gasps when he hears that the special girl’s name is Harley. Mason is asked if her last name is Quinzel which he confirms. It turns out that the guy in the next cell is Joker!

This issue of Harley Quinn finally gets the plot in motion. Harley’s confrontation with the Mayor really works as well as setting up Cecil as a bad guy. The fight with the toughs at HQ’s HQ is also comedic and well done and uses the disparate members of Harley’s team to excellent effect rather than the clumsy way they have been used in the past. I really like the inclusion of Zena Bendemova on the team. She and Harley play off each other very well and I hope the combination continues.

I do have to say that I have mixed feelings about Harley running into Joker again. I suppose with the story heading up to Arkham it should be expected but ugh. I hope future issues don’t run off the rails. Conner and Palmiotti might just make a terrific storyline but there is the danger of it crashing and burning too, this is high wire stuff.

Artist Chad Hardin does his usual good work with Harley. Colorist Alex Sinclair creates a balanced palette that is colorful without being affected. As usual, both the art and colors are in service to the plot line and the characters. This has been working well for a while now and it continues here.

So I am now back to enjoying this book and will give it a better rating that I did last month. I hope that the improvement continues.