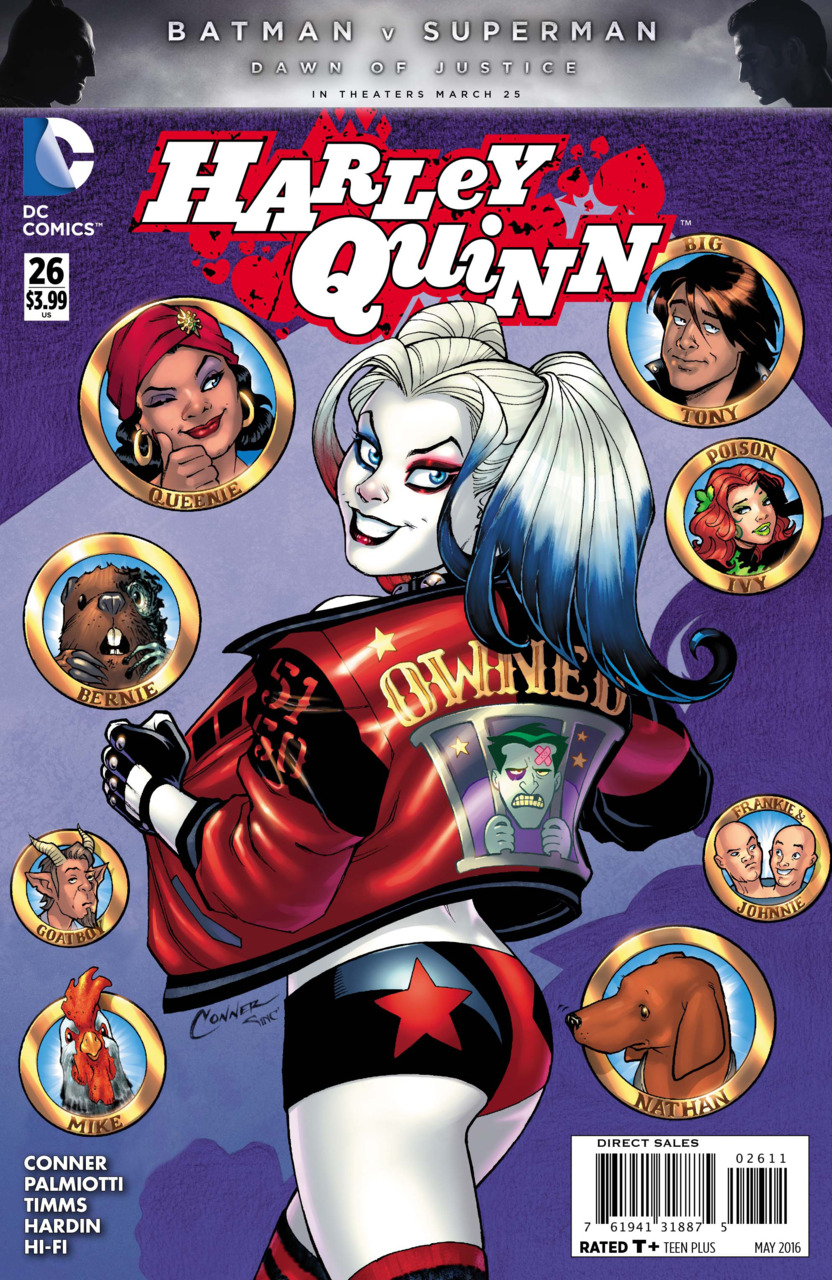 Harley returns to Coney Island after breaking Mason out of jail. She has no idea what new adventures await her in the safe confines of home in Harley Quinn #26.

Harley is having a bad dream. She is a Little Red Riding Hood type character and the Big Bad Wolf leads her into Grandma’s house. The wolf morphs into Joker who torments her mercilessly. She luckily wakes up on the train on her way home after springing Mason from Arkham Asylum and beating her former lover, Mr. J, to a pulp.

But Coney Island isn’t the restful return home Harley hoped for. She has to lay down the law against a trio of beach hoodlums. Also, an overweight beach treasure hunter makes rude comments about her dashing derriere which she takes none to kindly.

It also turns out that the Mayor has pinned all of his wicked deeds upon his recently deceased Assistant Cecil Applebaum and is now running for reelection. He is supported by the sinister Detective Spoon whom he has promised to make Chief of Police when the campaign is over.

A couple of years ago an aging assassin calling himself Wayne Wilkins is in the hospital after a run in with an unmentioned person who he blames for ruining his life. Who could he possibly be talking about? He has lost an arm in the fracas and has spent his fortune on this mysterious operation.

Back in he present day Queenie gives Harley a make over. Harley loves her newly blond locks and the jacket with an insulting picture of a beaten up Joker under the word “Owned”.

Back in the past, Mr. Wilkins is out of his operation but acting violently due to his severe headaches. He has to be tranquilized and given another operation to remove a tumor in his brain. After the procedure, he still is having issues so he throws a Doctor out a window and makes his way into the woods. In the snowy forest he finds a tool shed and proclaims his love for tools.

Harley is at Skate Club where there is a sixty thousand dollar prize for the winner of the Roller Derby no holes barred beatdown contest. Harley promises to take good care of her friends if she is the winner. Harley then meets her competition, a costumed and masked character – the Red Tool. He clearly has it out for our gal Harley. Until next month….

Amanda Conner and Jimmy Palmiotti’s plot is pretty straightforward this Month. With the ending of the Mason in Prison story arc the story transitions to a new adventure for Harley. Before the new tale gets underway though there are a few wandering dead ends that are hard to make sense of. There are four pages of nightmare and train travel and another seven of problems at the beach. It isn’t until page thirteen that the story gets underway at all, and then only haltingly.

Even so, for a Harley fan looking for a meandering walk with Ms. Quinn can be entertaining and this little stroll is that. The story does get underway eventually and ends on a cliffhanger, which is probably the reason for all the aimlessness in the issue.

Artists John Timms and Chad Hardin and colorist Hi-Fi do just what we have come to expect from this title: solid, clear art with a solid dose of sexiness and grit.

It should come as no surprise that Harley is now a pigtailed blonde. Her makeover was teased in the last issue and it was only a matter of time before the comic Harley would have to make way for the movie Harley. Conner and Palmiotti of course do this in the most meta way possible, which is one of the reasons for the success of this title.

Though this issue didn’t measure up to the last one I still enjoyed it. If you are a Harley Quinn fan I’d wholeheartedly recommend this issue. If you are thinking of getting into the title it would be a good one to start with as it is the beginning of a story arc, though keep in mind it does do a bit of housekeeping after the end of the previous arc. All in all it is a solid issue of a good comic.