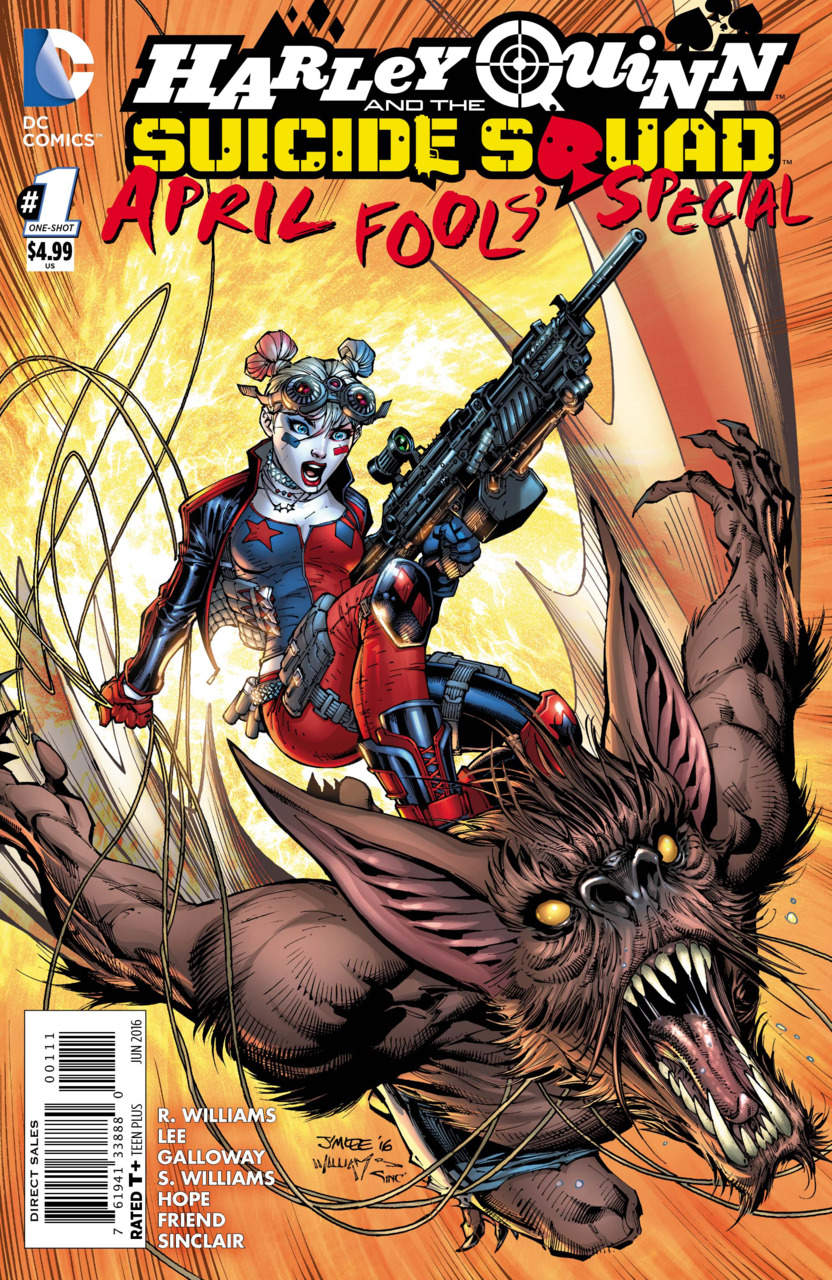 Harley is home alone thinking of what a hard life it is being a Super-villain. Even so, she is bored. Suddenly a shadowy figure rings her doorbell and disappears. Harley finds a card for Evil Anonymous, a Super-villain therapy group. There is also a message which inspires her to use her Psychiatric training to help Super-villains deal with their problems.

Her first victim, uh patient, is Man-Bat. Harley jumps on his back to ask him about his problems as he flies around the city. Unfortunately the extra weight causes Man-Bat to careen out of control through traffic which makes the therapy session a challenge. The police are in hot pursuit of the flying rodent who finally crashes in a dark alleyway. Harley scoots into a doorway just ahead of the cops that are on the trail.

Harley feels woozy and sees a stranger emerge from a car before all goes black.

Harley wakes up (much more cartoony) on a couch in her Psychiatrists office. Killer Moth comes in for his session, he is fixated on moths. Harley listens to his problems.

Harley loves the idea of helping villains and fantasizes about receiving recognition the world over for her contributions. However, after a few days of listening to the problems of various criminals she becomes bored. Luckily Poison Ivy shows up and the pair decide to go for drinks. To fund their escapade they rob a bank. Over cocktails Ivy points out that she was set up in her therapy career by the mysterious stranger.

Later, when she is treating Killer Moth, he declares that their sessions are really helping him. She decides that a field trip is in order so Killer Moth can help someone else as part of his therapy. They run into Scarecrow and try to recruit him for the therapy group. However Scarecrow releases his fear toxin which causes Killer Moth to relapse.

Harley decides to start a group session with her regulars and blasts them all with Fear Toxin. Since she has been listening to their problems she knows all of their secrets and decides to use her knowledge to become the ‘Quinnpin’ of Crime. Her foray into world domination is cut short however by the Justice League who arrive in time to capture her, but not before she gives Batman a good headbutt. Harley decides that the JL are the true bad guys.

Harley wakes up restrained in a steampunk Clockwork Orange contraption. She is being forced to watch videos of superheroes. A shadowy stranger is telling her that it is the superheroes that are the enemy. He shadowy figure is Amanda Waller. She convinces Harley to help her create a world without superheroes. Amanda leaves Harley’s cell and runs into Boomerang, Katana, Deadshot and Killer Croc. While they are shocked at Amanda’s plan to make Harley even crazier, they agree that she needs to be motivated for the big job ahead of them. Until next time…

The first that that needs to be addressed is the plan that the famously diabolical Amanda Waller has concocted as told by writer Rob Williams. Step 1: Get Harley to be the psychologist to super-villains. Step 2: Harley will surely take advantage of the super-villains. Step 3: The Justice League will step in to stop Harley which will… Step 4: Make Harley hate superheroes. And finally Step 5: Harley is motivated to rid the world of superheroes.

In my opinion, this is a dumb plan. If you think it makes sense please discuss in the comments.

Yes, it is a comic book with flying Man-Bat and ladies that can grow an oak tree in a minute. But please, this is too ridiculous for even an April Fools issue. If the story was a silly standalone it might be less egregious and maybe even fun but the fact is that it is the start of a Suicide Squad story arc which is now hard to take seriously.

Harley herself is well done, though she is kooky rather than really funny. This is a change of pace from Conner and Palmiotti’s Harley, which is a perfectly fine thing, and luckily her character rings true. It was fun seeing her headbutt Batman.

The art by Jim Lee and Sean Galloway were each good on their own. The more traditional art of Jim Lee was particularly spectacular in the Man-Bat panels which are very dynamic and visually humorous. Galloway’s Saturday morning cartoonish work, which occupies the middle of the book, is also fun in a very April Fools kind of way. However, it isn’t clear why the art transitions between the two. Moving from realistic to cartoon starts after Harley feels woozy and passes out but it just suddenly changes back when the Justice League shows up. Maybe it changes back to realistic because Jim Lee likes drawing the superheroes, which he does very very well. Otherwise it is hard to make much sense of it.

Inks by Scott Williams, Sandra Hope and Richard Friend and the colors by Alex Sinclair and Travis Lanham are all fine with a particular emphasis on the Man-Bat sequences.

I know that this is supposed to be a silly April Fools issue and I shouldn’t be taking it all too seriously, but this issue just didn’t gel for me. I’m not a fan of Suicide Squad so I’m not sure if all of Amanda Waller’s plans are this unlikely to succeed and I hate to think that this is going to be the start of a story arc for the Squad. The only reason I am not going to really slam this title’s rating is because of Jim Lee’s Man-Bat panels which I’ve been looking at over and over. But I didn’t really enjoy the story or the five dollar cover price.