Review: Harley Quinn and Her Gang of Harleys #1 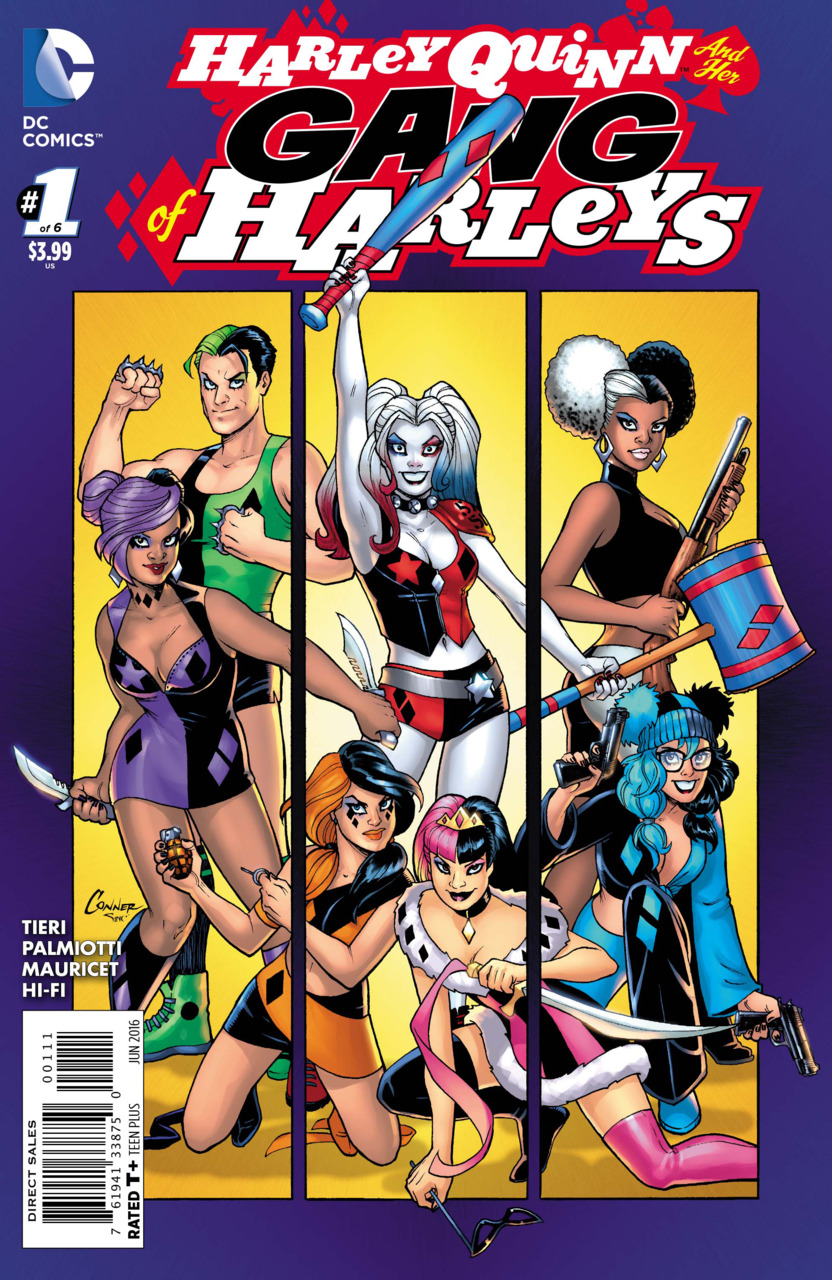 Spoiled for your protection…

The issue starts with an introduction to Harley and her Gang for all the new arrivals. In brief: Harley decided to put together a gang to help her with her do-goodery. The team is comprised of Harley Queens, Harvey Quinn, Harlem Harley, Bolly Quinn, Harvey Quinn, Carli Quinn, Hanuquinn and the blind, wheelchair bound Coach.

Harley and the Gang are breaking up a team of baddies who are shaking down the artisanial greengrocers in hipster-rich Williamsburg Brooklyn. After a tense standoff and a short tussle Harley shows she means business by pouring a quart of bodega bought day old GMO cow milk down the throat of the biggest of the shakedown artists. That is too heinous for the villains and they take off.

The Gang walks around the Farmer’s Market where Harley tells them that they have to start getting tougher and take more initiative in case she isn’t around. After eating some mystery meat Harley feels ill and goes into a porta-potty to relieve herself. While they are waiting for Harley, the Gang starts to bicker.  After waiting a very long time they check on Harley and find that she is missing. Coach gets a Facetime message showing Harley tied up and apparently kidnapped.

That evening the Gang still hasn’t received any messages from the kidnappers. They decide to go throughout the city looking for her. However, it turns out that Harley had kidnapped herself with the help of Big Tony, Eggy and Goat Boy. Coach suspected as much and had managed to hack into a communications between them and Harley. The Gang confronts the others who fess up to the trickery. It turns out that Harley wanted to train the Gang to work on their own.

Suddenly all of the Gang’s phones ring at the same time. Facetime videos show each personal people and places that they care about and a threatening voice saying “No one is safe”. This isn’t part of Harley and Big Tony’s plan. Harley is shown beaten up on the floor and a villain exposes herself as Harley Sinn. Until next issue…

Most Harley stories by Jimmy Palmiotti are pretty wild affairs and this team up with co-writer Frank Tieri is no exception. It is a good idea by the pair to take a few pages to introduce the team and their mission. This issue sets up some of their personalities but more work needs to be done to give each of the Gang their individual voices. Some of the success of this series relies on a few of the Gang characters to break out and become fully formed on their own. The best developed of the members is Coach who is an Oracle-like character, hopefully we will see even more character development for her. The mini is now set up for those voices to emerge.

The fight with the Hipster Gangsters at the beginning was superfluous but fun and Harley’s use of GMO milk against a lactose intolerant tough was very clever. Having Harley kidnap herself and then being kidnapped for real seemed kind of pointless. It seems like an unnecessary plot complication at this point in the series. It was fun to see the Gang go throughout the boroughs of NYC in search of their leader. Their choice of locales didn’t make much sense but it was entertaining.

Finally, we get a glimpse of what appears to be the big baddie of the issue – Harley Sinn. It shouldn’t be a surprise that the villain’s name is a take-off on HQ’s own. Sinn looks like a female Dr. Frankenfurter in motley. It is a cool looking character but her motives aren’t yet clear.

The inks and pencils of this issue are by Mauricet and the colors are by Hi-Fi. The look of this book is similar to the main Harley Quinn title with its cartoony visuals but there is a little bit of an edge that the other title doesn’t have and it works very well. Each of the Gang members has been given a different outfit which should help distinguish them going forward. The pages where the Gang is out on the town looking for Harley are particularly well done. Also, the page introducing Harley Sinn is very strong.

Overall, this issue gives me hope for a solid mini-series. By the end of the series I want to see at least one or two of the Gang members really blossom into well drawn characters which has been my main criticism of HQ book since the Gang was started. They all are ethnically different, and now have different costumes which are fine, but I want to hear individual voices by the time we are done. This is a good start though and I am looking forward to more.