Review: Harley Quinn and Her Gang of Harleys #2 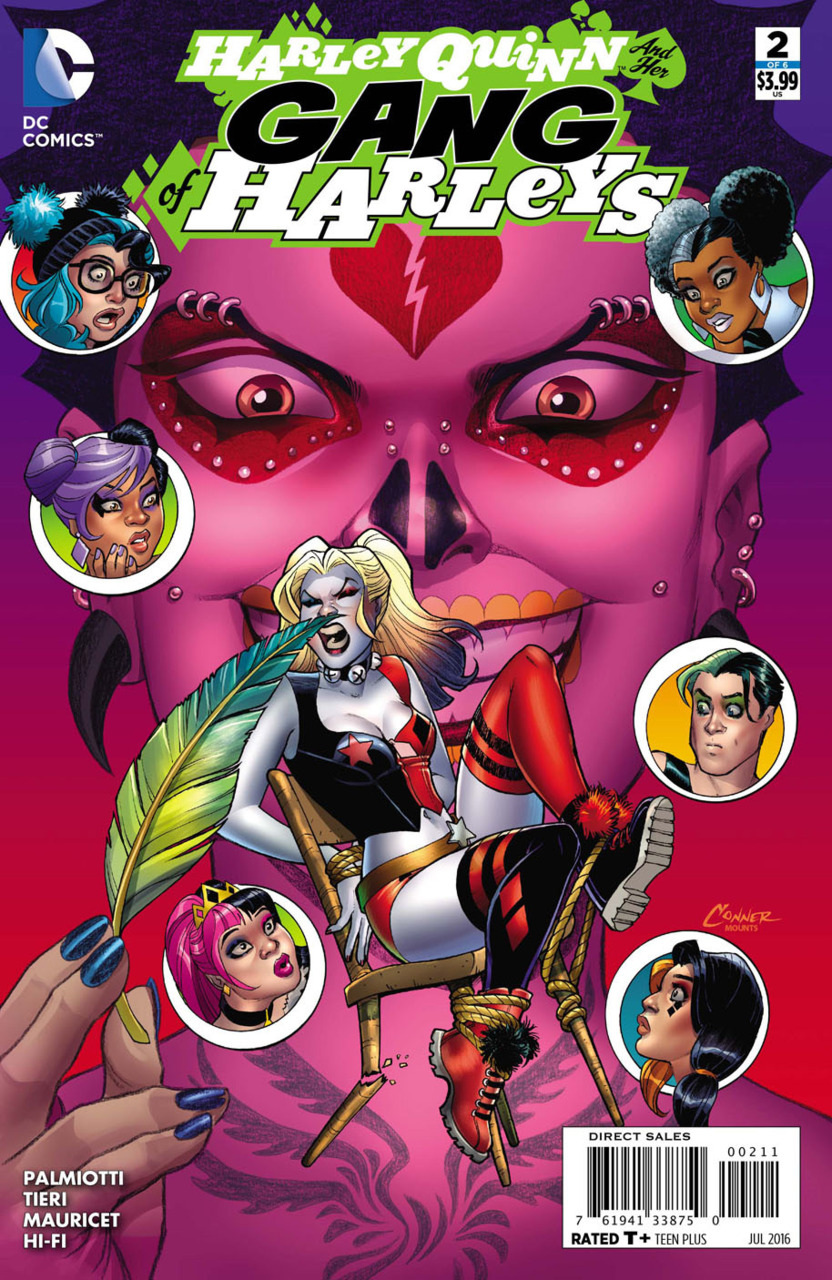 Harley Quinn is held captive by Harley Sinn who sends sadistic assassins to do harm to Harley’s Gang. Shall Sinn succeed? Find out in Harley Quinn and Her Gang of Harleys #2.

Harley is tied to a chair in a warehouse in Red Hook, Brooklyn. Her captors are the minions of Harley Sinn. The henchpersons are arguing whether they should break Harley Sinn’s instructions and have a little fun with Harley Q. Sinn overhears one threaten to disobey her order and puts a sudden end to him as a lesson to the others.

Harley Q seems to recognize Harley S but can’t quite put her finger on the identity of the buxom villain under all the white makeup. Sinn says she will eliminate the members of Harley’s Gang and believes that she is doing HQ a favor by getting rid of them for her. The ever-faithful Harley disagrees. Sinn gives her crew their instructions and they all head out to the various homes of Harley’s Gang for apparent mayhem.

At HQ HQ in Coney Island, Coach and Big Tony discuss the problem at hand. They also recognize Harley Sinn but don’t know where from. Over at the Indian restaurant, Bolly Quinn puts her Mom and Grandma into a cab and sends them off to Astoria all under the watchful eye of one of Sinn’s gang.

Harvey Quinn beats up a couple of homophobic bikers en route to sending his parents off to a hotel for their protection. He too is being watched by Sinn’s gang. Another baddie has his eyes on Harlem Harley who catches him threatening some of her neighborhood buddies. She lays a beating on him and he finds himself under the business end of a Metro North Train. Harley Queens also warns her parents not to let strangers into their Flushing apartment. All of the Quinn Gang head to Bolly’s restaurant to regroup.

Back in Red Hook, Sinn brings Harley to the roof of the warehouse to look through a telescope and watch one of her minions fire a rocket launcher into Bolly’s restaurant. The restaurant explodes while Harley Quinn looks on in anger at the apparent demise of her Gang.

Writers Jimmy Palmiotti and Frank Tieri continue their tale of Harley’s abduction by the strangely familiar Harley Sinn. Harley is mostly sidelined here are Ms. Sinn and Harley’s pals take center stage. Sinn is an interesting and wicked villain for this mini though her goals are somewhat murky. Hopefully she has a point to what she is up to.

The members of Harley’s gang are beginning to emerge from the background. The scene with Bolly Quinn dining with her Mom and Grandmother nicely adds some dimension to Bolly. Though Harvey’s character is still pretty stock it is good for him to get some butt kicking in. It was also interesting to see the community minded Harlem Harley in her home element protecting her friends.

These scenes provided good character development in this issue which has been sorely needed since Harley taught the gang to flay. Still more needs to be done but this is a good start.

The art by Mauricet and colors by Hi-Fi are up to the high standards Harley Quinn fans have come to expect. There is an element of cartoonishness to the pages which gives the comedy space to breathe but is sharp enough for the danger and drama to work. All the action is clearly drawn. There are some cool set pieces such as Sinn standing over the minion she is about to kill and the comedic panel where Harlem’s friends realize they have dropped a bad guy under a train. Harley Quinn isn’t portrayed in her usual manner, she spends most of the issue with a ball gag in her mouth, but Harley Sinn is given a lot of good facial expressions.

I didn’t find this issue as flat out funny as the last issue but I think the writing team is getting things set up for a solid journey forward. I felt that the character development is very promising not only for this mini but for the gang in the future, provided they haven’t all been killed by the rocket launcher. Something tells me they’ll be ok.