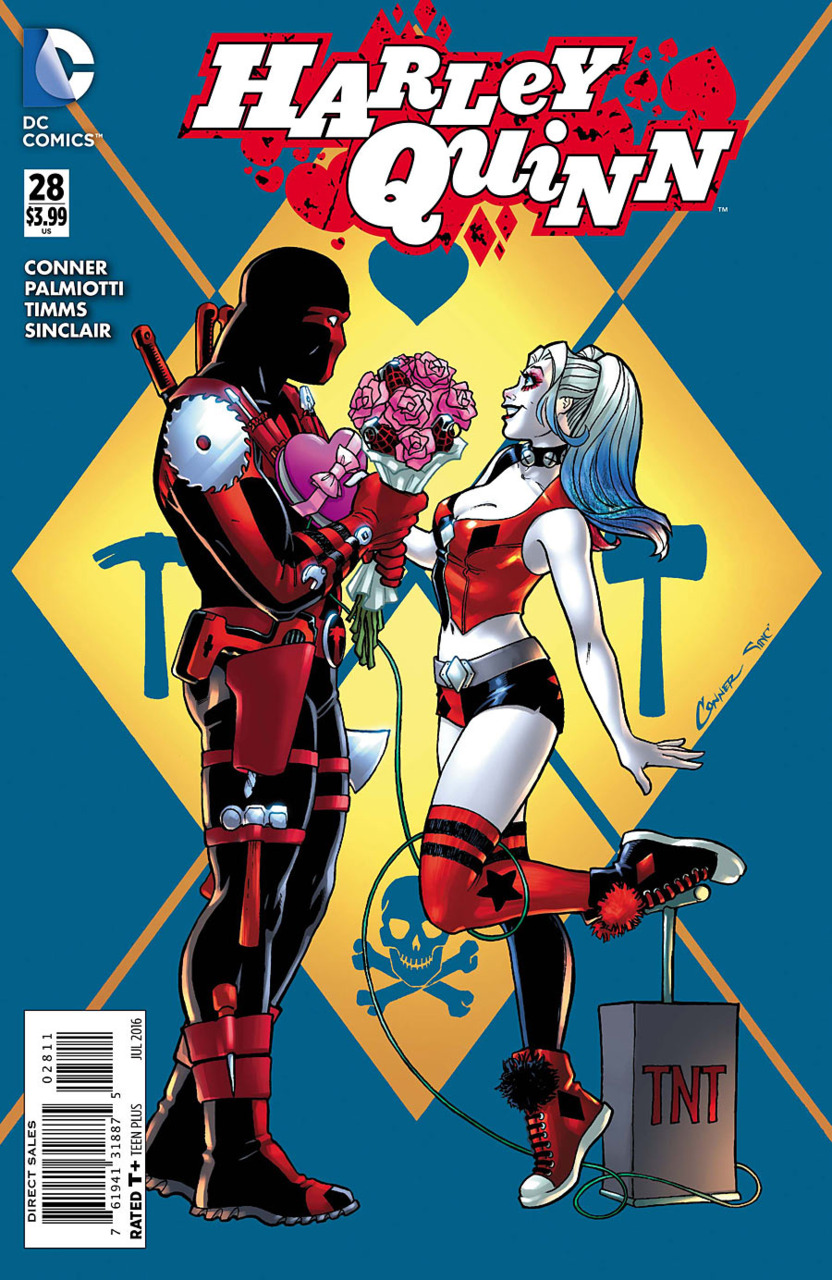 Harley and Red Tool’s nuptials take a violent turn (to absolutely no one’s surprise) as they both face a new menace. Can they work together to survive the Mayor’s vengeance in Harley Quinn #28.

Yonder lies the spoilers of this comic…

The Mayor is giving a speech to the press and introduces the new Chief of Police, Harry Spoonsdale. However, Harry has just received word that Harley Quinn is in a church in Brooklyn and heads off at the Mayor’s request to eliminate Harley.

At the church we find Harley storming down the aisle to the waiting Red Tool who wishes to marry her. There is a group of strangers tied and gagged in the pews and a terrified minister at the alter with Red Tool. Harley seems angry that he would be so presumptuous to think she would marry him and even more enraged over the fact that he tattooed her otherwise perfect behind. They predictably engage in fisticuffs and Red Tool falls and hits his head rather sharply. Harley didn’t mean to really do damage and rushes over to him. She is relieved to find him still alive. Harley talks to those bound in the pews and finds that they have engaged in heinous behavior.

Suddenly the cops announce that they have surrounded the church and call for Harley to come out. She figures that she is the one that is the victim and leaves the building where she is met with a hail of gunfire from the men in blue. She is able to dodge the bullets but some of those in the church aren’t so lucky.

The unconscious Red Tool has a dream where he is giving Harley a wonderful and indulgent cruise. The ship hits a Joker-shaped iceberg and he finds himself drowning Titanic-style while Harley meets Aquaman and a team of penguins.

Red Tool is roused by Harley who needs his help against the cops. She is still angry about the tattoo, but now even more angry that he didn’t take in her whole gorgeous bottom when he had the chance. Red Tool points out that all of the people tied up in the church were very bad people that he collected for Harley’s post-nuptual murderous enjoyment. She appreciates the gesture but has a better idea.

Harley has the naughty minister strip to his boxers and leave the church waving the white flag which stops the gunfire. Harley talks to Harry Spoonsdale and makes a deal with him. In exchange for allowing him to capture the score of heinous criminals in the church HQ and RT will be freed. Harry announces the arrests which will make him very popular, though the Mayor is enraged.

Harley and Red Tool head to Coney Island where they have some hot dogs and get to know each other. They seem to have a lot in common and Red Tool understands her in a way that no one else ever seemed to. He also apologizes for his rash behavior, which Harley appreciates. She asks for some time to consider a relationship with him and he leaves her to soak in the waters of Coney Island.

Meanwhile at the home of Dominic Capablo in Brooklyn, Dominic gets word that Harley has killed her son in the melee at the Skate Club. He demands that Harley be killed. Until next month…

Writers Conner and Palmiotti score big in this final issue of the Red Tool arc. This book has a nice balance of violent action, naughty dialogue, and character development. It is nice to see Harley have someone that loves and understands her other than Ivy and Selina. This was a very satisfying issue and Red Tool looks like he may be a continuing character in Harley’s story.

John Timms is on art and Alex Sinclair on colors for the main story. Their solid and often excellent work should come as no surprise to Harley readers. They give Red Tool a lot of humorous personality for a hooded character. A particularly good panel was Harley’s last where she is soaking in the waters of Coney Island. The moon and the water contrast nicely against her blonde hair and slightly pleased facial expression.

The fantasy sequence had art by Moritat and colors by Hi-Fi. It was soft and flirty with a very nice, light change from the regular pages.

I was slightly disappointed by the previous installment of HQ because I thought that Red Tool’s feelings for Harley kind of came out of nowhere. Since that was already established last time I was able to orient myself into the plot and really enjoyed it. As I said above, I liked seeing Red Tool’s affection for Harley. Her response to his overtures was predictably wary but then she began to warm up to him. The relationship arc was very satisfying, I hope we see more of Red Tool in issues to come.