Review: Harley Quinn and Her Gang of Harleys #3 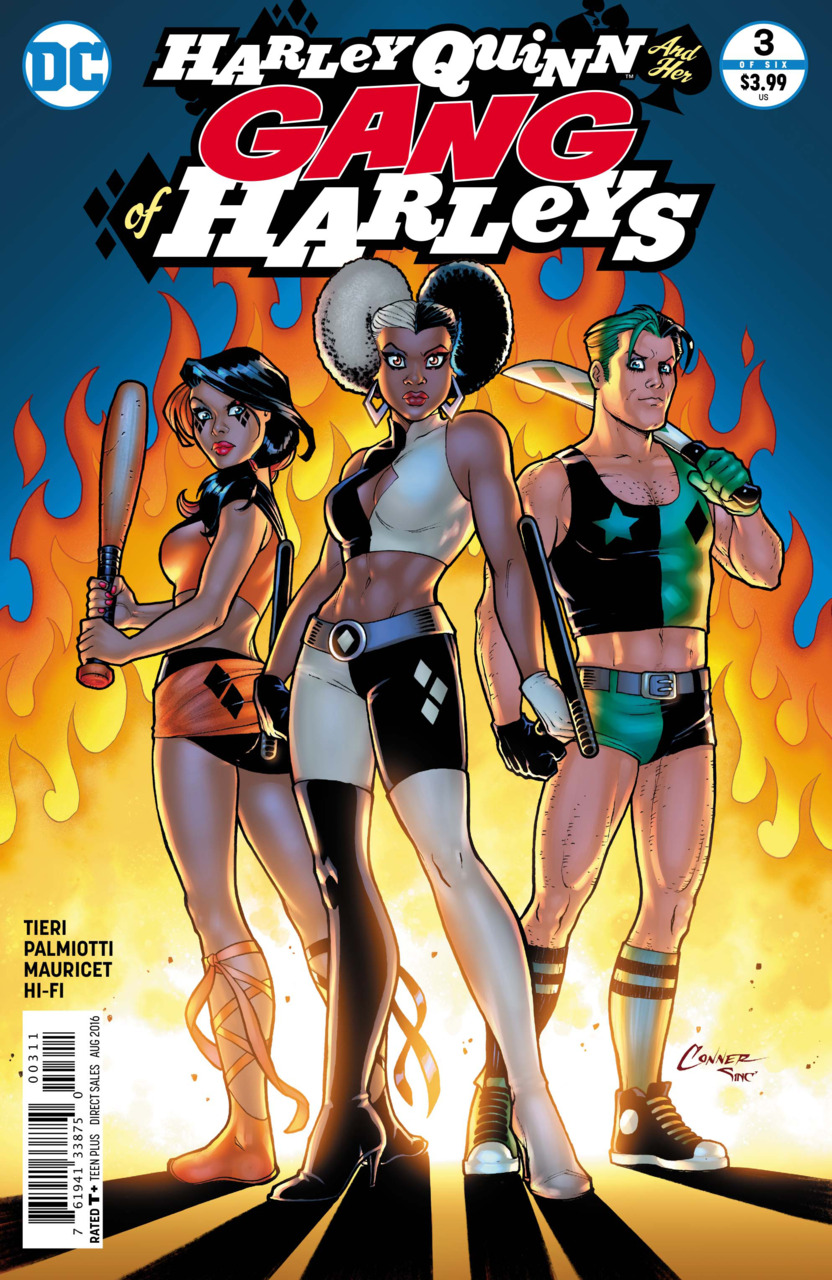 Harley’s Gang comes under fire from Harley Sinn’s henchmen as they try to rescue their kooky leader. Can they survive the conflagration? Will they meet their fiery doom? Find out in Harley Quinn and Her Gang of Harley’s #3.

Harley Sinn’s crew have finished blowing up Bolly Quinn’s family’s restaurant with several of Harley’s Gang inside. The henchmen admire their work and leave the rooftop.

A few minutes prior, five of the Gang are inside the restaurant having sent their families into hiding for their safety. Bolly Quinn and Harlem Harley step outside as Bolly complains about her kin. They see a cigar fall from the adjoining roof. They look up to see the incoming rocket. Bolly hustles the Gang to the safety of the restaurant freezer just ahead of the blast.

In Coney Island, Coach, Big Tony, Eggy and Goatboy see the news report of the exploding Indian restaurant and are worried about their friends. The Gang in the freezer are able to call into HQ and Coach is relieved to hear they are ok. The Gang escape the freezer through a trap door and sneak their way to safety knowing that Sinn and her cronies will believe them to be dead. Coach has a place they can go to into hiding.

In the Red Hook warehouse, Harley is tied to a chair and Harley Sinn tells her of her Gang’s demise. As Sinn gloats, Harley manages to untie herself and attack Sinn. Harley is foiled by the returning henchmen who knock Harley out. Sinn doesn’t let them hurt Harley however.

In Woodstock, NY the Harley Gang converge on Coach’s gorgeous country lodge home. They get in touch with Hanuquinn who is watching over her Uncle Sy in a motel. Hanuquinn hangs up the phone to attend to room service delivered by a menacing armed waiter. Uh oh.

Back in Woodstock, a careless remark prompts Coach to tell the Gang of the car accident that killed her parents and sibling as well as put her in a wheelchair and blinded her. Coach shows the Gang her electronic war room full of computers and fire arms. Coach has identified Harley Sinn as one of the people that auditioned for the Gang by name of Harleen Sinette. Coach has found that Ms. Sinette’s credit card was used to rent a warehouse in Red Hook. They posit that this is where Harley is being held prisoner.

Back at the warehouse it turns out that Sinn hasn’t been paying her henchmen. She gets on the phone to get the money cleared by threatening someone that she will show up drunk to the Mayor’s charity party. The ploy works and she asks her minions to be patient, but they refuse. It looks like there is going to be trouble between the bad guys.

Harley’s Gang show up in Red Hook and barge into the warehouse. They see the henchmen dead or close to dead, but no Sinn and no Quinn. One of the damaged baddies tells them that the building is booby trapped. The Gang runs away just before the building explodes. Until Next Month…

Writers Jimmy Palmiotti and Frank Tieri turn in another decent episode in the series. This issue doesn’t have the pop of previous installments however. Harley has precious little to do here and the story relies on the personalities of the Gang members, which are all still developing. We get some back story into Coach which helps, but the rest, after many months, still struggle to emerge.

Mauricet and Alex Tefenkgi are on Pencils and Inks and Hi-Fi is on colors. They continue the high quality work that is a hallmark of the Harley Quinn comics. The drawing is crisp and clear and the colors have a full and strong palette which makes the issue an easy and enjoyable read. Harley Sinn is particularly well drawn. She is a sexy and sinister vixen that knows how to keep her people in line.

I am finding the series a bit uneven. This issue doesn’t have either the highs or lows of the previous books but still isn’t coming together. I know I’m like a broken record on this but the mini is the perfect opportunity to develop individual characters and it is beginning to feel like an opportunity lost. The Gang dress differently and have some individual quirks but that doesn’t make compelling characters. Between Harley’s old pals and the new Gang members there are just too many actors for anyone to get more than a bit part.