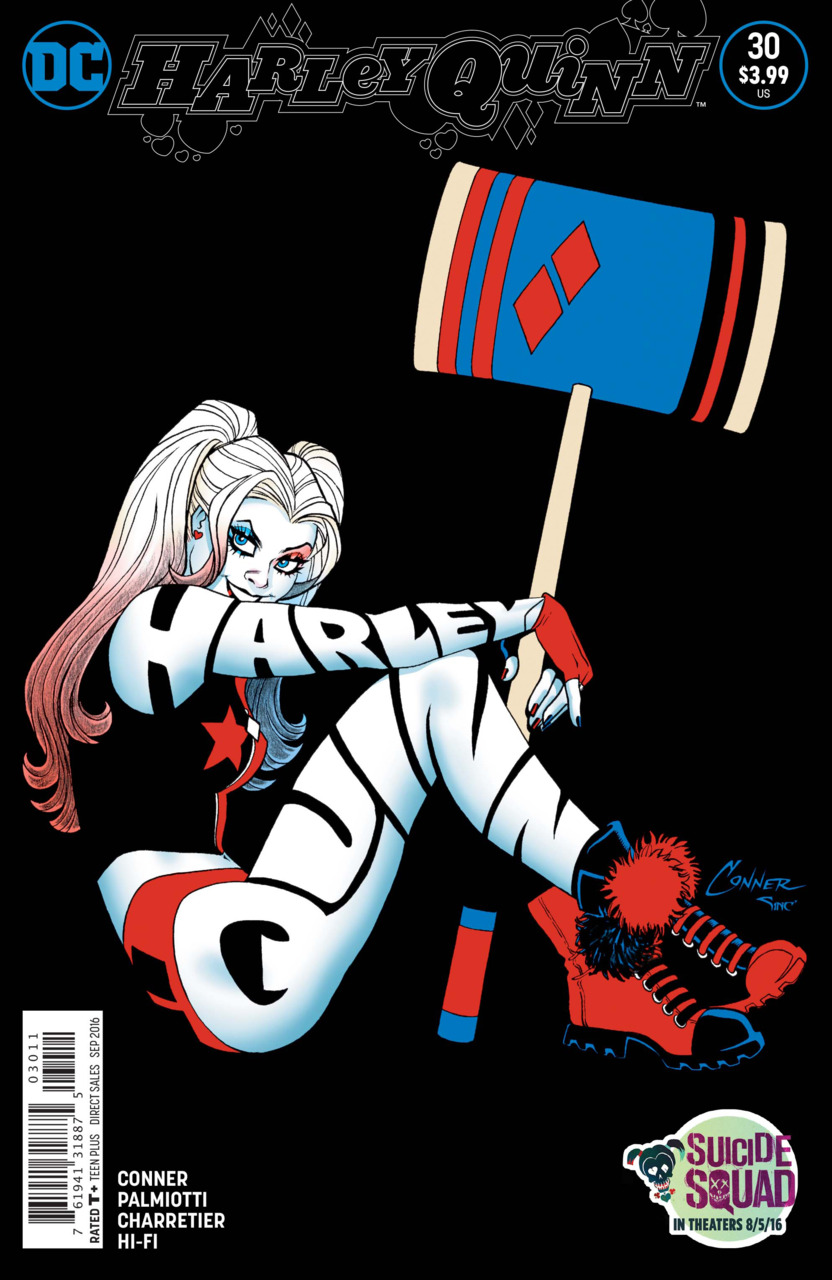 Harley is on a quest to save a tree, an old man’s memories, some retiree’s savings, and subway etiquette in Harley Quinn #30.

There are spoilers down here somewhere…

Harley, Big Tony and several members of the DC pantheon are sitting in a movie theater and Harley wants more popcorn. She leaves her seat and decides to cut the line at the concession stand. Penguin, who is on line, complains about her rudeness. Suddenly he turns into a long line of Penguins and the theater turns into a nightmarish maze. Harley tries to find her way back to her friends and when she finally does the theater has erupted into pandemonium. In the craziness that follows, Harley realizes that this is only a dream. Only a dream.

Harley wakes up chained to a tree in Brooklyn. Apparently a construction crew is threatening to cut down the tree to make way for a high rise apartment building. Harley is protesting the destruction of the last natural element in the neighborhood.

Harley is then reminded that she is overdue getting to her job as a psychiatrist at the assisted living home. Big Tony takes her place chained to the tree as she scampers off. On the way Harley runs into a subway rider who steals a seat from a pregnant woman. Our hero gives him an atomic wedgie from the hand bar.

At the Free Spirit Assisted Living Home, Dr. Quinzel discovers that several of the home’s residents have been scammed out of all their money by a telephone con artist. Harley calls Coach back at HeadQuarters and asks her to see who has been calling the residents of the home to see if they can discover the con artist.

She also has a session with Mr. Woodson who is depressed over the death of his parakeet. He felt that his deceased wife sent the parakeet to him and now that the bird has died he feels truly alone. Harley wheels Mr. Woodson to the roof of the building and whistles. A flock of birds descend on the pair and one parakeet lands on Woodson, he has found another bird that he feels is heaven sent.

Harley then returns to the Brooklyn construction site where she finds a gang of workers trying to pull Big Tony off of the tree. One particularly large man, Dookie Dave, looks like he will either get the chains off or crush Tony. So, Harley drives an 18 wheeler into him. It doesn’t look good for poor Dave.

The other construction workers decide to fight Harley but a group of local hipsters arrive to battle for the tree themselves. As the melee begins Harley takes a moment to feed Big Tony but suddenly a backhoe comes out of nowhere and destroys the tree. The backhoe is driven by the owner of the property and he disperses the crowd. Harley announces that she has a Plan B.

After a few hours of drinking at a local bar Plan B arrives in the form of Dr. Pamela Isley – Poison Ivy! Harley takes her to the construction site where Ivy tells Harley and Tony to get hoses to soak the site. They do, and Harley and Ivy sit atop the destroyed tree while the denuded lot turns into a lush wetland full of running water, reeds and bushes. Harley and Ivy snuggle while watching the botanical display and decide that their further adventures can wait until the next issue. The End.

Writers Amanda Conner and Jimmy Palmiotti deliver an unusual installment in this final issue of this numbering sequence. There are several very loosely connected segments to the plot. The sequence runs: nightmare in the movie theater, protecting the tree, the fight on the subway, the tale of Mr. Woodson’s bird, the beginning of the mystery of the con artist, more fighting at the tree, and then the Ivy wrap up. It is head spinning and unfocused on the first read and a lot to take in. However, the tale delivers a lot of emotion as well. The story about Mr. Woodson is very touching and shows Harley’s compassionate side. The final part of the issue where Harley and Ivy banter as they watch their garden grow is very satisfying if you are a fan of these two together. The story just kind of stumbles to a halt and they could possibly have written fewer plot pivots and gotten further on the con artist storyline, but there is the feeling that Conner and Palmiotti wanted to end this sequence of Harley Quinn books on a tender, emotional note rather than an action one. Next month the HQ books start at issue 1 and will be on a twice a month schedule so it makes sense that they are going to want to tee the story up just right.

Artist Elsa Charretier does some interesting work here. Together with Hi-Fi’s colors, Charretier sometimes evokes the recently departed and much loved Darwyn Cooke. This issue doesn’t have Cooke’s discipline and firm visual grip, but there are more than a few panels that show his influence. For instance, the opening scene in the movie theater shows many DC characters including Batman, Superman, and Wonder Woman (slapping Supe’s hand from around her shoulder) and is evocative of Cooke’s collection of characters in the Jimmy’s Diner piece (which I have heard is a reference to writer Jimmy Palmiotti). Also, when Harley is first seen chained to the tree, her face has that Cooke strength-in-simplicity. The busier panels lose this quality, but it is wonderful to get it when we can.

For my rating, the first time I read through this issue I had every intention of giving it low marks. The plot was scattered and confusing. The side activities seemed pointless. The ending didn’t resolve in any substantial way. However, after looking more closely at this issue I found more and more to like. There is a full page with Harley and Mr. Woodson that is positively joyful. And as a Poison Ivy fan, I loved the closeness between the two compromised heroes. The closer I looked and more I read the more I liked the issue.