Review: Harley Quinn and Her Gang of Harleys #4 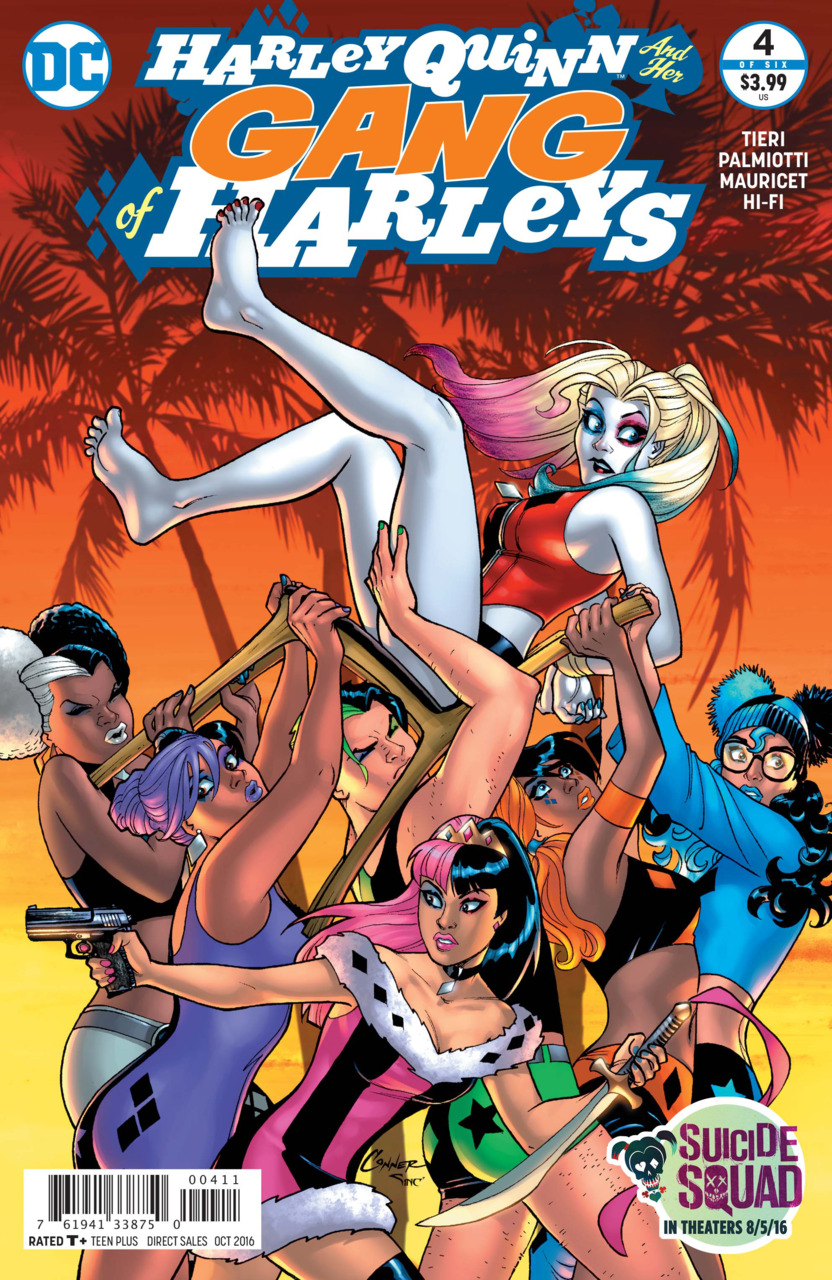 Harley is kidnapped and taken to a creepy island full of illusions while the Gang tries to rescue her without getting themselves killed in Harley Quinn and Her Gang of Harley’s #4.

In an Atlantic City motel room, Hanuquinn is fighting with the assassin that has come to kill her uncle Sy Borgman. They two manage to throw the killer from the balcony but not before Hanu gets sliced in the gut by a knife and passes out.

Elsewhere, Harley is in a bikini on a small desert island. She has no memory of how she got here or into the bikini. She gets into the water but a shark is coming her way. She attempts to punch it in the nose but not before it turns into Joker. When the punch lands she feels like it has hit a wall instead of her ex beau. Joker transforms into Harley Sinn, the creepy copycat clown lady that has kidnapped Harley Q. Harley is in some sort of Holodeck where Sinn can manipulate reality. The two are on some kind of island hell-scape full of skills on spikes, volcanoes and a tower crowned in a skull.

Back in Atlantic City, Sy is trying to get Hanu to the hospital and is on the phone to Coach. Coach is in a van with Big Tony who says he knows a guy that can help them. If they go to a real hospital the people that hired the assassin will know they are still alive. So they head to see Tony’s friend.

In the van with Tony and Coach are all of the Harley Gang including Eggy and Goatboy. They are hiding in the van pretending to have been killed in the various calamities that befell them in previous issues. Tony wheels Coach out of the van and the pair enter the Brand Building, a giant office tower in the middle of Gotham. The two burst into rich businessmen man Richard Brand’s office and confront him with the exploits of Harley Sinn. Coach has correctly surmised that Sinn is actually Brand’s daughter. Brand decides to give them some information as to where Sinn might be hiding out.

Tony and the Gang are on a boat driven by Captain Strong (who was turned into a psycho Popeye by some space spinach a few issues back in the Harley Quinn title). They are on their way to The Island of Horrible Death, where Harley Sinn has her hideout. They approach the island and some of the group dive into the water to swim ashore.

Inside the island jail a pair of prison guards in motley go into Harley Quinn’s cell to feed her but she is apparently gone. Well, not so much gone as laying in wait for their foolish arrival. Bad stuff goes down.

The Gang swimming ashore are attacked by what look to be Joker Fish but are really Harley Sinn fish that nibble at them painfully. Once on shore they are met with a number of little Eggy grenades that make the beach explode and are then attacked by aggressive vines. In the distance they see what look to be Poison Ivy, Catwoman and Power Girl. In reality it is just a trio of robots made to look like them. Until next month…

Writers Frank Tieri and Jimmy Palmiotti keep the story moving very nicely in this issue. It seems that every installment has a different setting which is mixing things up and keeping them interesting. The focus is on the Gang, but even so there really hasn’t been a break out member with the possible exception of Coach. Big Tony technically isn’t a member of The Gang but he does have a consistently large role to play as Harley’s fixer. This issue Hanuquinn was the only other member that got any focus. Otherwise the Gang member are pretty interchangeable which is too bad after all of this time with them.

Mauricet does the art in this issue and it works well as is standard for Harley titles. One thing that Harley fans can count on is good art no matter who the artist is and this issue is no exception. There is a slightly cartoon-y feel but no so much that the action scenes look silly. It really contributes to the comedy while still leaving room for the darker parts of the story.

The colors we done by another favorite, Hi-Fi. There isn’t a consistent palette but the color scheme changes depending on the scene and location. Hannuquinn is a stark blue against the brown and orange motel room. Harley’s holodeck experience is in shades of blue with some bloody red added in for good measure.

I have been a little hard on the past few issues so I’m going to be a little lenient on this one. The story is moving along very nicely. I’ve given up on having the Gang members develop as individual characters. Once I let that go, I’ve been able to enjoy the story more. My favorite page is the nearly full page of Sinn’s island hideout. There are lurid reds on top of a dark wine sea full of danger. Looks like a cool place to hang out.