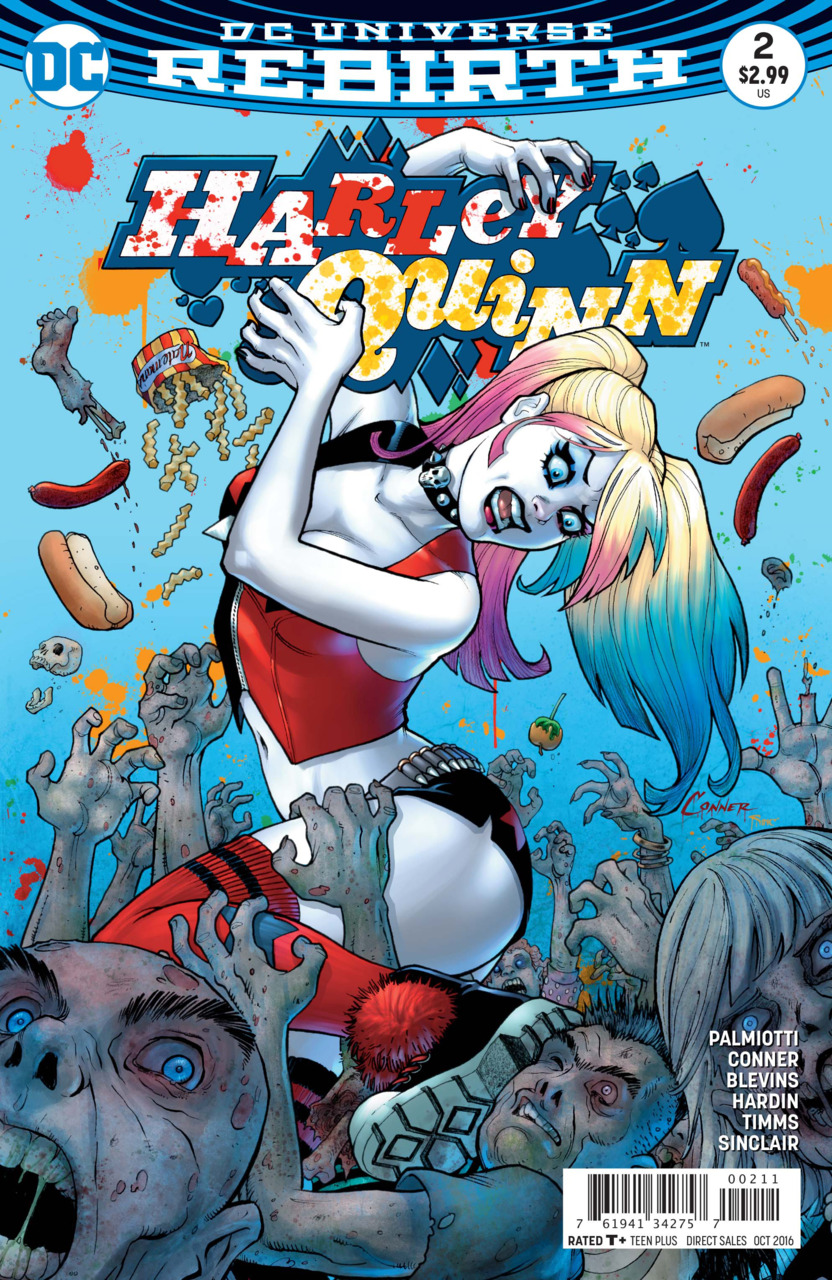 An Olivia Newton John mention mid fight, fantastic art with Harley in her nifty new outfit featuring the red and black playing cards, Harley on a horse crunching zombies with a baseball bat, and Harley using a toilet plunger to kill a few more, what is not to love about this title!

Picking up direct after last issue, Harley and her friends are basically trapped inside her apartment watching TV while zombies run riot across Coney Island. Redtool’s fate is shown after being catapulted from the apartment, minus one arm, and the riot police have worked out the disturbance emanates from Nate-Man’s Hot Dog Stand. A bubble prevents the zombies from going past a certain point, with Harley and her crew locked deep within it.

Reminiscent of some Dead Rising game-time, as Harley uses whatever is around the amusement park (eg toilet plunger!) to dispatch the zombies, the action is THICK and FAST with Harley working up an appetite as she “works”, (she eats a pizza mid fight) and eventually Tony and the rest of the gang turn up to offer her assistance.

Unfortunately  for them the park is being completely overrun and they are being hustled into various “last stand” scenarios, each one more “last” by the moment! Goat Boy is down to one last clip, Tony only has a few shotgun shells, Harley has her fists, and nobody else has much of anything. When Poison Ivy turns up at the end of the issue with a weed-whacker, just when things look truly desperate, Harley’s cry of “Yaaay!” echoes our own, that’s for sure.

Nobody wants to see this fun-loving gang be torn apart by a mass of zombies.

It would be fair to call this a good fun throwaway issue, spiced up by Harley’s endless commentary on events, and I think it also fair to say this lightness of heart is a major selling point of this Harley Quinn series. It doesn’t take itself too seriously but it’s never entirely devoid of consequence or emotion. They might be a silly, nonconformist lot, but that’s why we love them.

I’m curious as a reader to see where the story will go post the Coney Island zombie storyline, and it wouldn’t surprise me to see some shakeups in the supporting cast and even location. The art deserves special mention as Harley herself is wonderfully drawn, the early scenes where she is shooting out the hospital windows so Redtool doesn’t go SPLAT on them are really quite beautiful. The sheer joy on Harley’s face as she plunges toward the zombies (after trying unsuccessfully to “fish” the horse from the mouths of the zombies) sums up both the spirit of the character and the book.

With Harley Quinn going bi-weekly now it looks like it will a lot of fun to follow her adventures and that of her friends!  A good solid issue for Harley lovers.