Review: Harley Quinn and Her Gang of Harleys #5 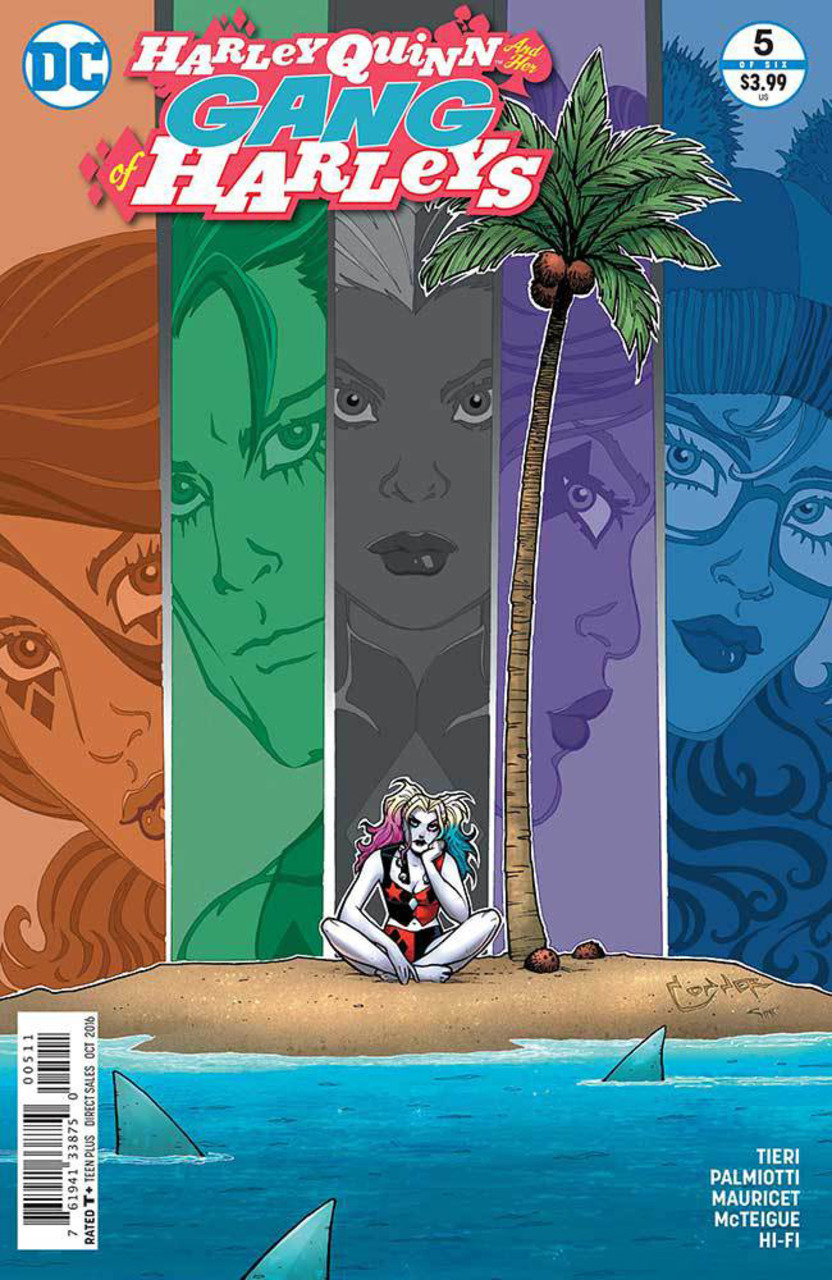 Reviewers Note: I have simplified the story structure of this issue to bring the sections dealing with the history of Harley Sinn all together which resulted in my doing the same for the modern day action. The issue itself mixes the two plots which works fine in the comic but resulted in an impossibly muddled synopsis.

The issue begins with the story of Harley Sinn. She was born to a rich NYC real estate tycoon in a loveless marriage. She was ignored and persecuted as a child which gave her a wicked streak, setting fires and possibly shooting a classmate. Her parents ultimately exiled her to an island where she was isolated from the world. When she got older, she forced the Captain of a supply ship to take her to civilization before slitting his throat. Her rich daddy covered up her crimes and gave her a steady allowance to keep her quiet and out of trouble. After her mother died her father asked her to come to live with him. The happy reunion would be short-lived however.

Her Daddy got engaged to a new woman who had a daughter Sinn’s age. The two became close and got into lots of trouble together. Finally having someone to love, she started to get her life together only to find her new friend dead from a drug overdose. Everyone blamed Sinn, especially her Father’s new bride to be. The night of the wedding the two had a fight causing Sinn to try to strangle her soon to be step-mom. Sinn left home and lived on the street.

Just as she hit her lowest point she saw a newspaper article about Harley Quinn and knew that she had finally found her soul mate. She saw that a contract had been put out on Quinn so she endeavored, in full Harley Sinn makeup, to kill the assassins. When she saw the newspaper ad recruiting for the Harley Gang she felt that she finally got her chance. However, during tryouts for the Gang a sucker punch took her out of the running. She watched the team from afar, jealous of their comradeship with her hero.

Back in the present day the Gang of Harleys is in a battle with Robo Catwoman, Robo Poison Ivy, and Robo Power Girl. It isn’t going well for our heroes. Harlem Harley gets the idea to lure the robot doppelgangers into the field of Eggy grenades which destroy the mechanical miscreants. Suddenly they hear a cry for help from the forest and go to check it out.

The Gang finds Harley Quinn in a tree fighting off a pack of ravenous mechanical goats. The Gang springs into action and destroys the hooved robots with the remnants of the mechanical Catwoman et al.

Harley declares that the Gang has done good and she is clearly proud of them. She declares that rather than escape the island she will go back to fight her nemesis.

Sinn has an army of troublemakers however and offers $10 million to the person who can bring her the head of Harley Quinn. Until next time…

Writers Jimmy Palmiotty and Frank Tieri give us another exciting chapter in the story of the Harley Gang. Harley Sinn’s back story is interwoven with the solid present day fighting which give this exposition-heavy issue plenty of action to keep things moving.

The art is by Mauricet, Inaki Miranda, Dawn McTeigue, Ray McCarthy, Mark Roslan with colors by Hi-Fi. The drawing styles differ throughout the issue but the consistent colors by the always good Hi-Fi keeps everything together. The art in the Harley books is always good, and while this isn’t the best of the bunch, it is much more effective than most.

Harley Sinn in full makeup looks very cool and sinister. Our gal Harley Quinn is a little more cartoony than usual with some oversized pig tails, but there is one three-quarter page of her that is a terrific depiction.

I haven’t been too high on this mini, or the Harley Gang in general, but this issue finally succeeds in breaking out one of the Gang which is just what was needed. Harlem Harley steps out from among the pack to be a singular character and leader of the team when Harley Q isn’t around. When HQ finally tells the Gang that they ‘done good’ I felt the same way myself. Coach was always going to be a particular character as was Harvey Quinn because of their physical uniqueness. However, Harlem has finally emerged as a smart and capable individual among the other Harleys. So, while this issue wasn’t as good as some other books out there, I am going to be lenient on it because of this.