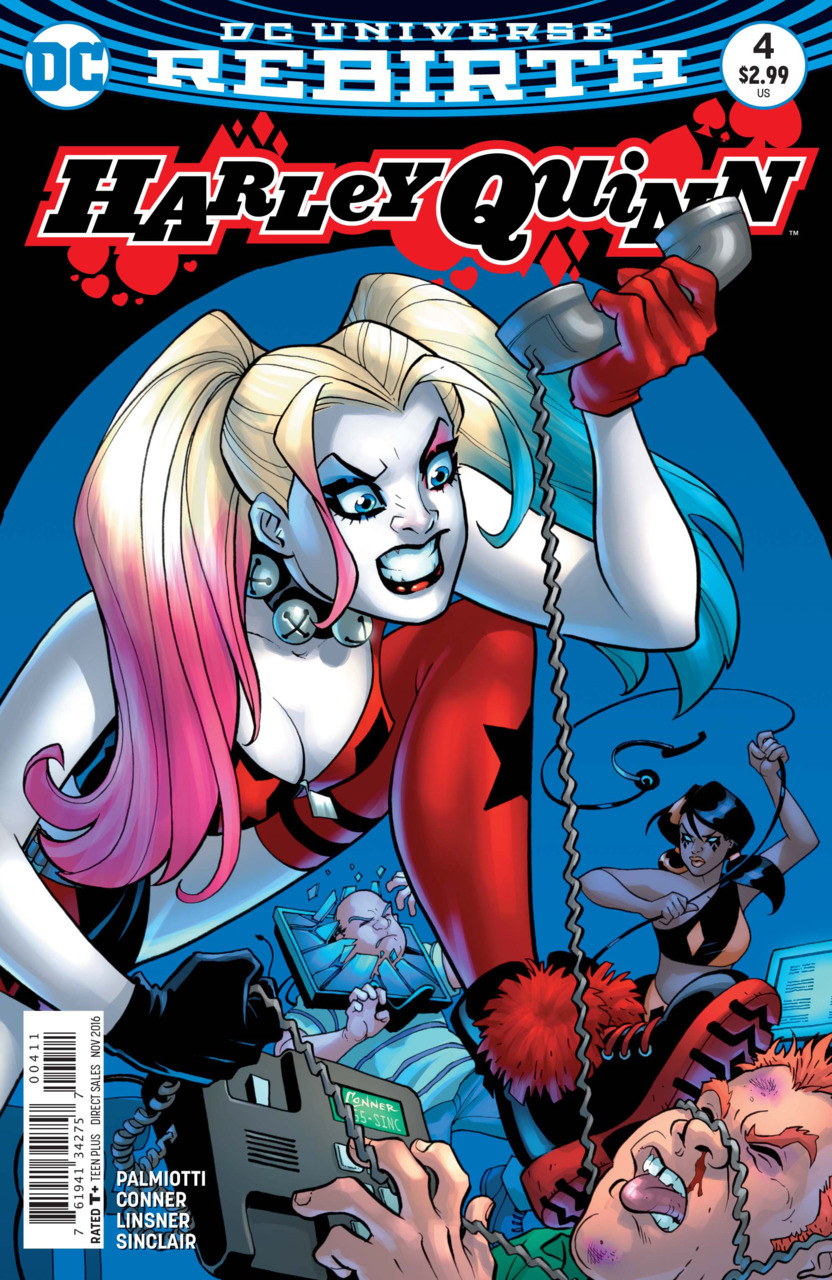 Coming fresh out of the last arc involving the zombie/infection breakout at Coney Island, Harley does some paid good deeds for the hot dog vendor who had the stall that sold the infected meat, and then bumps into an amusing cameo from comic book writer Frank Tieri, who illuminates our lovely Harley with a series of answers for each question she asks, in exchange for a hot dog. Although life may be meaningless, that doesn’t mean you can’t give yourself a meaningful life, he says, which are wise words indeed! I personally found this sequence the most effective part of the issue, and it is another strong issue in the Harley Quinn run.

The action bounces quickly to India after Harley gets a call altering her to a new crisis, and she hightails it first class to India with Bolly Quinn, a member of the Gang of Harleys in tow.

What follows is a wacky adventure in Mumbai, as Harley, Bolly, and Bolly Quinn’s cousin Hari go off to defeat an evil call center as Harley tries to “make a difference” and go off to shut down their head of operations. Harley looks quite striking all issue in the new version of her playing card suit, before donning a stylish 80’s headband as they go to kick ass and take names at the call center!

Facing off against the front desk at the corporate headquarters, Harley triggers a fight with a huge killer robot ripped from the screens of a cheese-filled sci-fi movie. The fight is extreme and the action fast paced as Harley and Bolly claw out a win against a robot not too worried about the corporate headquarters or the employees in the call center! One of the most amusing sequences is a page showing two consecutive panels showing every single member of the call center on loop repeating their line about the IRS filing a lawsuit against the unlucky target of the call. There is also a slightly irreverent edge to the Harley Quinn title which means that most issues can sail on the comic edge even when the story is light on details. It would be fair to say that this issue does have a lighter feel without much emotional weight, but that doesn’t mean it’s not a funny and fun read.

At the conclusion of the fight we get a pretty fun reveal that the inhabitant of the killer robot is a young boy in his nappies who gets a spanking across Harley’s knees, which he thoroughly deserves. Harley gets the location of the call center owners from him and then declares they will finish them off within three pages or less!

Flicking off to Russia, we get a slam-dunk quick nightclub scene as Harley blasts her way through a nightclub, slashing the throat of a Russian club owner and sparing his sister who promptly shuts down the call centers.  It’s a slight problem, but enjoyable. I guess if think about it from the perspective of the advice of Frank Tieri’s character appearance, although it’s a random act of “cleaning house” and ridding the world of one tiny little problem, at least Harley and Bolly do that. She’s all about action over empty words after all!

The art in this issue is strikingly different from prior issues, a touch darker and it has a slight period look, a throwback to the cheesy serial movies that seem to inspire it. I picked up in certain panels a slight Howard Chaykin influence, combined with the more cartoony style of the prior issues.

For the Ivy-Harley shippers, of which this reviewer is very much on board with, Harley does make a one panel reference to Ivy and her “excuses” for not moving in, and Harley feels that maybe she has been pushing her too hard. She looks forward to their vacation, so let’s hope it happens shippers, they truly are one of the best relationships in comics. I feel confident we will see this issue play out.