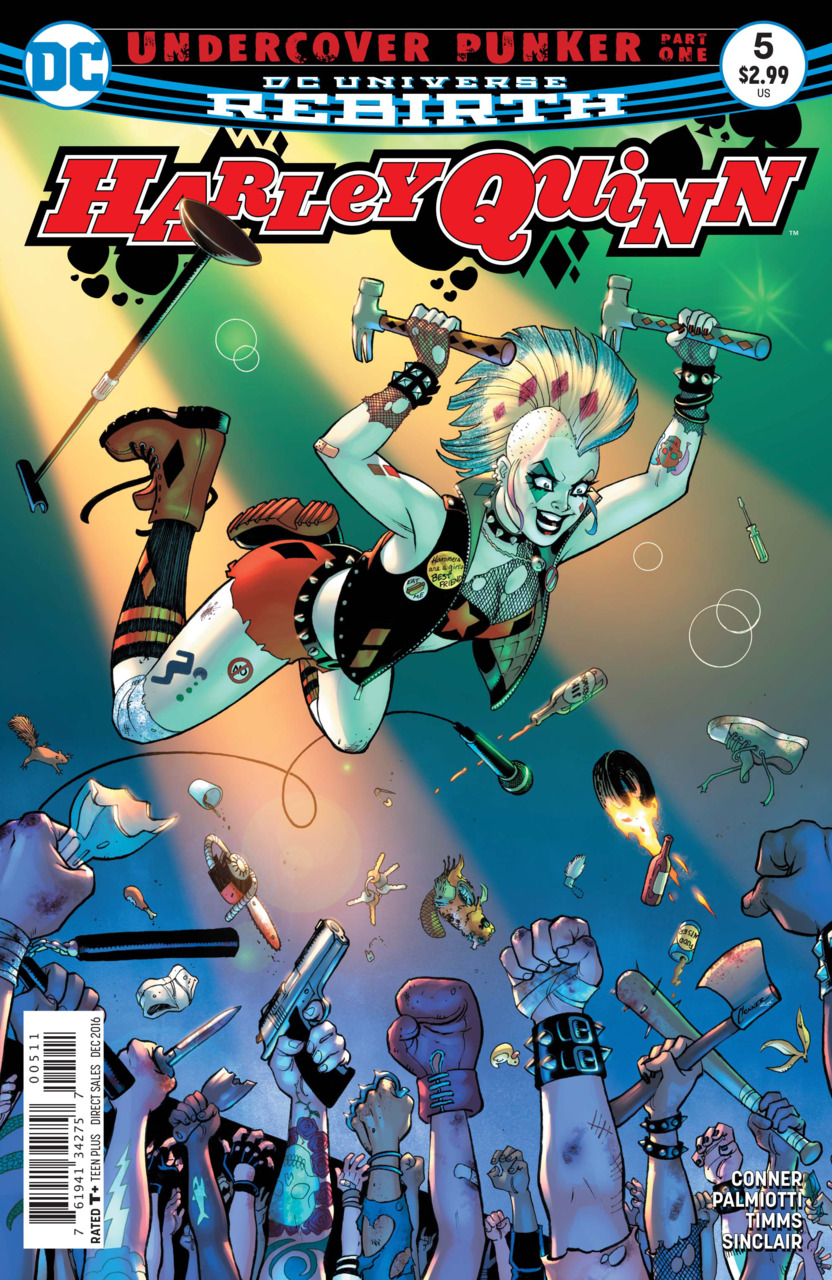 Harley is truly punk and beautiful. The first page of Harley Quinn #5, with Harley as a Punk Rock Chick singing about pizza pie, is truly awesome.

We cut to night-time Coney Island, Brooklyn, where a strange bunch of armored black knights on horseback attack the postal van and critically wound Mr. Ben, the old man and Harley’s friend, who is driving the van. The van crashes, and Harley comes down in her nightgown, and she manages to plug one of the armored idiots with a shotgun (Tony had two as he ran down, because of course you have two shotguns handy for car crash noises) before the Knights escape. Harley swears vengeance on them, and Ben with his dying gasp says he had a package for Harley from Arkham…

The chief of police, spiraling out from the events of the previous issues, is under the pump and keen to hunt down the knights, and after a press conference he enlists Harley’s services for a price. He also details they already know who the armored knights are, a rock band called PURPLE SATIN. That’s right folks, we are riffing on song titles in Harley land! Well, why not. That feels right.

One of the crooks is a senator’s son, which complicates things for the police chief, and Harley has to track the knights to the clubs where the bands are playing. Before you can say “kooky plan” she quickly fills some time with a pizza tour of Brooklyn with the limo driver, a quick toilet break, and then decides whilst speaking to Tony that she will form a band of her own to track the knights and collect the 200K reward! Tony is on lead guitar, Harley obviously shall sing, but none of the Gang of Harleys can muster any musical talent.  Luckily, Eggy can play drums courtesy of his four-armed gorilla suit! That just leaves a bass player, and Tony knows someone…

Cut to Red Tool, killing some goons and their mistress on board a ship at sea in an entertaining action sequence in which he imitates a duck to get on board the vessel and kill his target. As always, I’m enjoying his inclusion.  Harley and co. chopper down and after the action is over, and Harley proposes Red Tool join the band as the guy on bass! Offer accepted.

Harley is getting her hair cut by Madame Macabre for the next scene – the art in this issue has a slinky, angular style which I enjoy and is different from the more cartoony style of some previous issues.  This style works particularly well this issue. We see her head getting shaved, beautiful colorization around her eyes, as Madam Macabre sculpts her new look. There’s a changeability, a flexibility to Harley in the DC Universe that I enjoy as a reader, at her best when shown with a certain lightness that retains a lot of heart. I enjoy the way Harley flits between personas and costumes. In her own book this persona is positioned as an imperfect anti-hero, which I believe is one of the wisest decisions DC has made in the last five years. Harley plays to a version of rebellion and freedom of spirit that is both understandable and attractive.

Harley parades her look to Eggy, Red Tool and Tony, accidentally dropping her towel in the process, causing jaws to drop. There’s a playfulness to Harley’s sexuality which this series embraces.

Meantime, we cut back to the nest of the Purple Satins, holed up in Brooklyn, where it is revealed that the package from Arkham mentioned above is in their hands, and they open the package. It’s a bar of soap, minus for our heroine, inscribed with J hearts H…and we all know who Mistah J is.

Summing up this issue, the stylish artwork and amusing story push this issue along at a nice fast pace and I hit the end before I knew it. Writers Amanda Conner and Jimmy Palmiotti know how to keep this ticking along nice and smooth, I’m giving it an extra half star just because I adore the image of Harley’s new haircut so much. Grab a copy, kids.