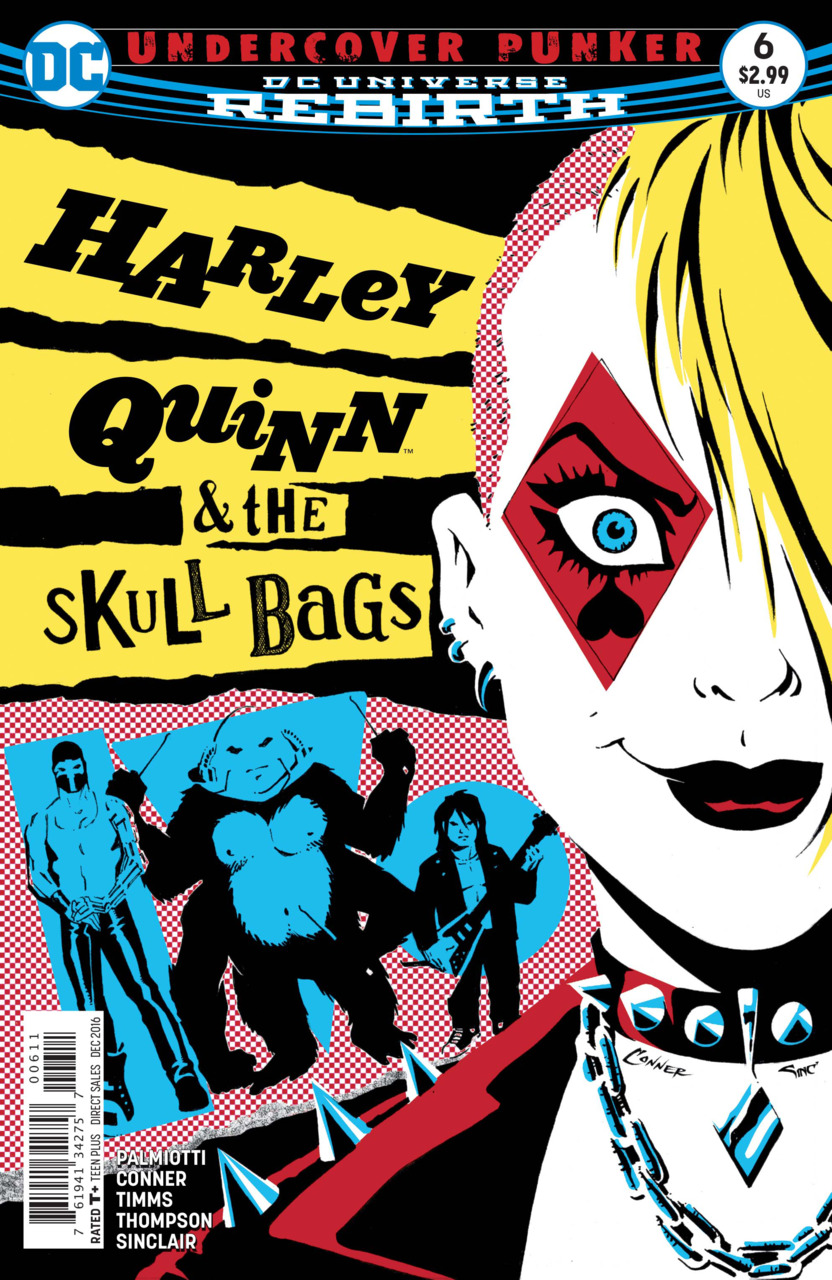 First up, the art in this issue of Harley Quinn is straight up some of the best I’ve seen in recent times and it fits the story beats to perfection. Harley, who often plays light and snappy in this series, gets an injection of some serious rock and roll attitude this issue! After some noisy audience members view their displeasure at Harley’s singing voice as her ramshackle The Skull Bags open their set, she slaps down and knee’s one heckler in the groin, putting him down hard and winning the punk audiences favor, all captured in fantastic images which pump the story hard.  “I want respect, an I’m gonna have it!”, Harley screams, whipping the heckler with the microphone.

She turns to the crowd for his fate, thumbs down, they gesture. He then gets hammered by Harley with a bass guitar belonging to Red Tool! Harley is OFF the leash this issue, as she goes back to singing about pizza pies, and flinging dog poop at the audience, who dig it heavily. “You are one broken individual”, she is told by a member of Purple Satin, who invites her to stay after the show. In case anybody is feeling sorry for the guy played by the bass guitar (we weren’t) Harley explains he was the runner of a dogfighting ring, and what’s left of him is being hauled to the cop shop! Harley’s brand of justice and entertainment are purely her own and are quite nutty and yet come from a good place. It’s endearing.

Harley cuts solo at the after party, flirting with band members, noticing the heart of soap, with J hearts H inscribed, around the neck of one of the band members who is showing an almost unhealthy romantic interest in our Harley. Upon seeing the soap, Harley spins back to a flashback scene in Arkham, shown with a different style of art by Jill Thompson, showing when she was treating the Joker as Dr. Harleen Quinzel, and detailing perhaps a crucial early incident in their relationship involving the heart soap, where Joker does seem to show a level of caring, for Harley even if only to further his own goals of escape and mayhem. It’s important to remember the damage to Harley is and was real, however flexible she has become in her adjustments and grown as a character.

As Harley and a couple of the Knights travel to a mysterious location and get frisky, Redtool, Eggy and Tony play some ball and talk shop, showing concern for how tired and burnt out Harley is becoming. The Bahamas trip gets another mention, which of course signals both hope and terror in the hearts of Harley/Ivy shippers, for who among us does not feel this will be a crucial test for their relationship survival? Well, I worry anyway.

Meantime, Harley and the two band members travel toward a run down apartment, and it’s worth noting that the car they drove in looks a lot like a kickass version of a classic Batmobile, or at least a nod to it. The band members pull rank, getting the ok from a silhouetted figure that looks suspiciously like one of Bat’s most longtime rogues, and they all get through the door to discover – a superhero fetish club! What fun she shall have!

In looking at this issue, I would say that this had a stronger through line than some issues of Harley which often rely on the quickness of the lead character, a layering of subplots and multiple activities split between sections of the book. That’s extremely enjoyable, but I did enjoy feeling like Harley was kicking solo and running her own mission after she really made such an emphatic statement at the punk concert. As noted the art is uniformly excellent and effective and the flashback scene gave us a taste of something different while tying into the current story. It’s hard not to love this issue and current arc and I have absolutely no intention of resisting such an emotion.