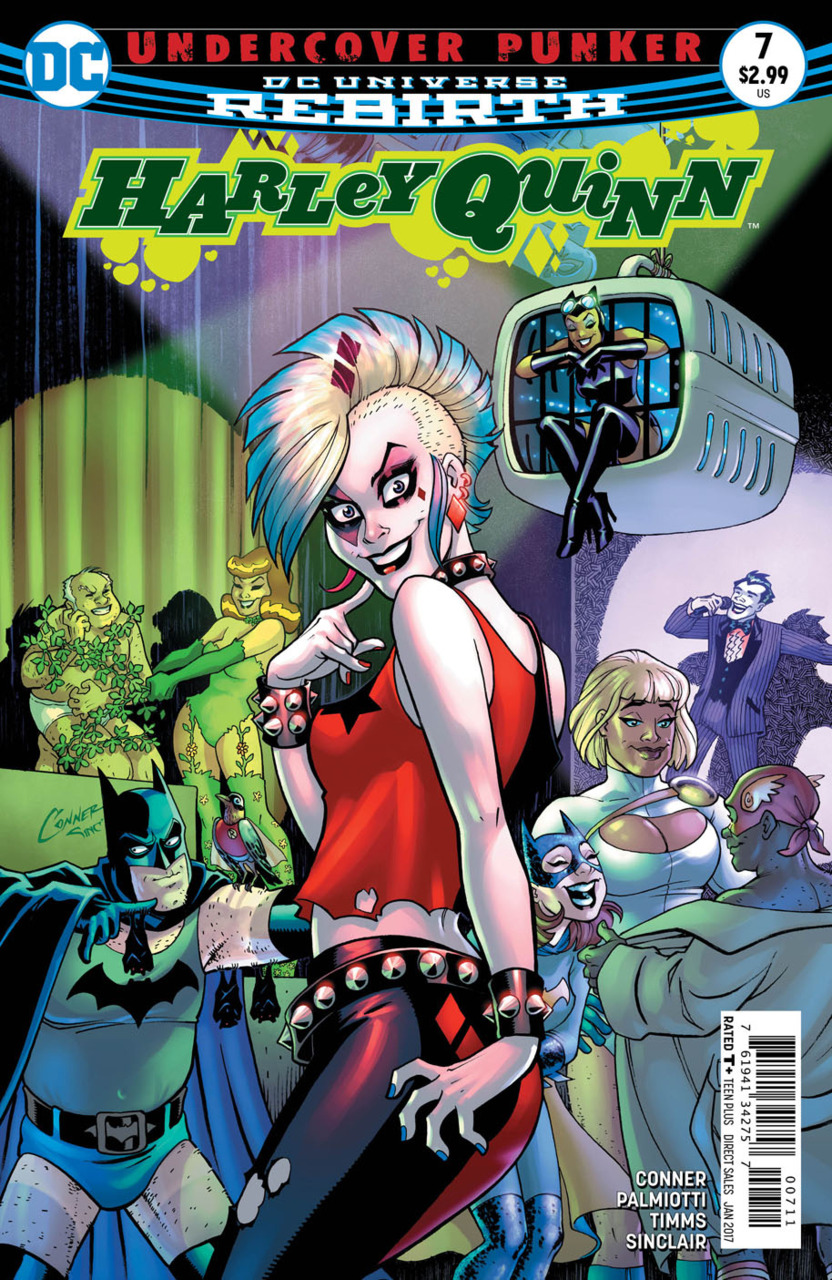 Picking up on the events of last issue, Harley Quinn and her cohorts in the Purple Satin group, Jello and Billy Blood, enter the super-hero fetish club Fowl Play, much to Harley’s delight, where they are guided toward a meeting with the owner Oswald Cobblepot, aka The Penguin.

As Billy goes in to meet Cobblepot, Harley goes has a bathroom visit with her amorous gal-pal, Jello, in tow, where she bumps into a furry-faced Power Girl cosplayer. Meanwhile, Big Tony and Red Tool continue to look for evidence against the band Purple Satin and are busy finding what they need when they stumble across a bound guy in the closet who amusingly runs away, “like he’s late for Free Comic Book Day” according to Red Tool.

Their little excursion is ruined by two of the band members of Purple Satin smashing through the wall in a truck! Cutting back to Harley in the bathroom, the attention (not perhaps unwanted, but not particularly requested) from the leather-bound female member of Purple Satin, Jello, is perhaps starting to pall. Certainly Harley has been only moderately receptive to her advances.

Billy Blood meanwhile has problems of his own, as he discovers from Oswald Cobblepot that he brought Harley Quinn into the Penguin’s secret club, much to his amazement. And it is a changed Harley, no longer the Joker’s lackey or criminal, but a do-gooder and friend of the new Police Commissioner! Penguin is cranky that the Purple Satin members have kept robbing mail trucks (including injuring her favorite mailman) after doing the job Penguin had wanted them to do in the first place. David Bowie fans can take a deep breath as Penguin threatens Billy with a swift death and a spike in his record sales, mentioning how death worked for David Bowie! Ouch.

In the meantime, Harley and Jello are taking a tour far down below the club. There’s an amusing picture of Harley imagining she is driving a Flintstones car, which is all kinds of beautiful. It has to be noted that the stellar art which pops off the page is just fantastic this issue, and John Timms on art just works wonderfully with the mo-hawk Harley is wearing all issue.

And right on cue, as we descend below the club, it’s obvious that Harley is not only over Jello’s advances, she’s more than aware of what Arkham is and what it represents. A playground fetish version of Arkham might be something that appeals to a certain segment of Harley Quinn fans, but Harley herself is all too aware of the real thing to perhaps glamorize it too much – and meanwhile, she see’s the heart shaped J pendant around Jello’s neck as something belonging to her!

Meanwhile, Red Tool, Eggy and Tony are woken up in a warehouse, held by the other members of Purple Satin, in particular a cool looking guy in dark glasses, Buster. They explain that their excuse was they wanted to steal arrangements of Purple Satin as they liked them so much as a band. This is patently untrue, but Purple Satin buy into it, recognizing just how bad Harley’s band was!

What makes this a good issue of Harley Quinn is the twist – it turns out that the band kind of rates somebody who likes their stuff enough to try and steal it, and they themselves aren’t the most morally upright citizens either. They stole the car to get to the hotel and they knock off grocery stores for food and cash almost every other week. And steal canes from blind people! Bizarrely, but in a very Harley-esque way, this draws everybody together a bit more. There may be no honor among thieves, but they have a good laugh.

Harley meanwhile continues to play dumb to avoid arousing Jello’s suspicion, but her cover is blown as Billy Blood arrives back on the scene with the information gained from the Penguin. Harley finally gets to to kick the ass of the overly affectionate Jello, and Billy tries to go toe-to-toe with Harley before throwing her in with the fetish inmates. Jello suddenly pulls a gun which ramps up the drama and downgrades the fun, (pun intended) and her and Billy run right into a not-too-happy Penguin who kills them, which surprised me, as a reader. But to a certain extent, that mix of light and wacky, and a darker edge works in an issue like this.

This is one of the darker issues of Harley Quinn in a while. Coming to Harley from one perspective, this might have seemed like a weird transitional issue, but the fact is that Harley herself states that Billy and Jello would likely have paid the same price – they killed her favorite mailman after all at the beginning of this arc. Harley then smashes up Penguins little system of monitor screens which made everyone feel a lot better and then she hightails out.

Harley and her new friend the Police Commissioner commiserate and they recognize this crazy fetish club has to exist for people to work out some issues. In return, the evidence of the robberies is turned over to the Commissioner and Harley has her Mista J soap heart back, and it serves as a reminder that “having a fresh start isn’t as easy as it seems”, no matter how hard you scrub.