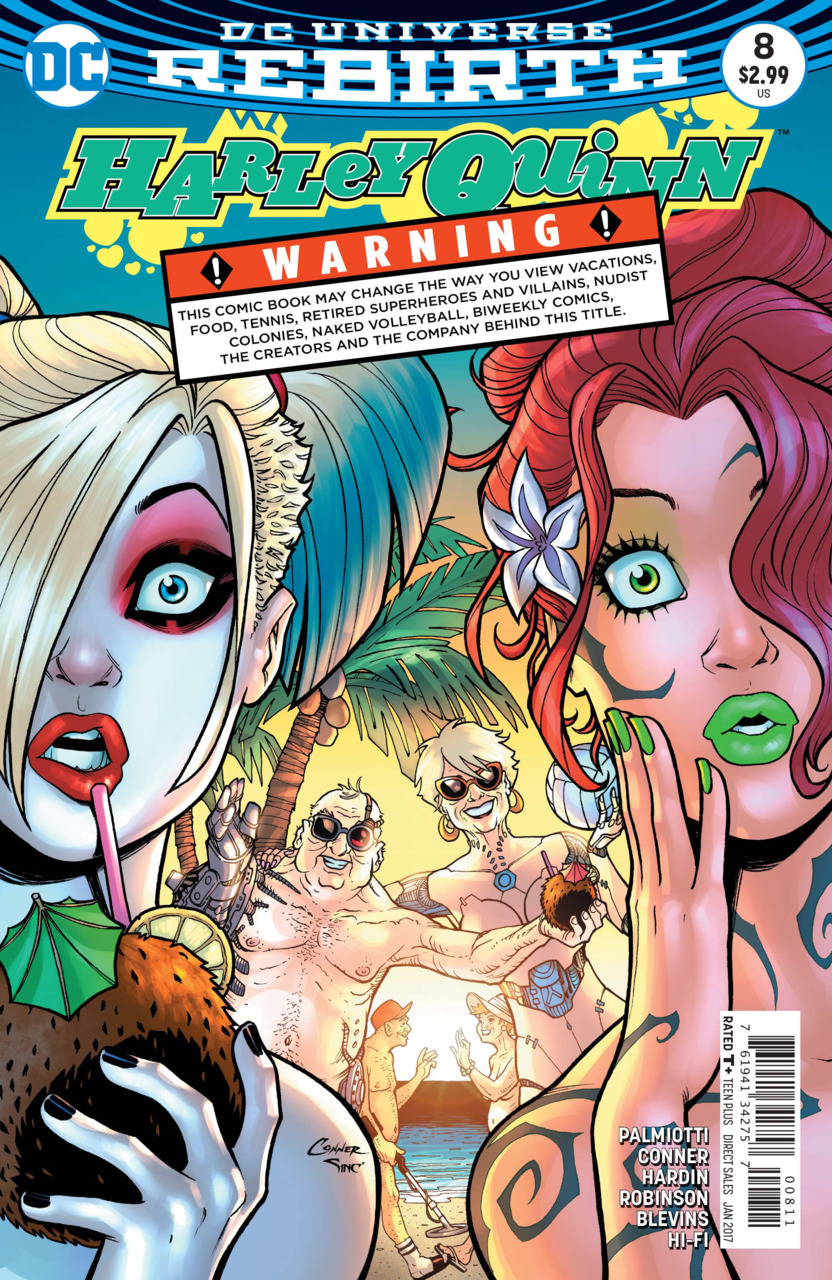 This is probably my favorite issue of Harley to date and the issue went with the old adage of leaving them wanting more. From the very first page we are aware the long heeled trip to the Bahamas is taking place for Harley and Ivy.  A chauffeur takes them to The Colony, basically a retiree’s nudist camp! Harley being Harley, adjusts fast, with Poison Ivy just behind her. There’s a fair amount of slapstick humor and puns by the ladies, but it’s all in very good fun, and neither character is too worried about the nudity (including their own) once they adjust. Chad Hardin’s art is right up there in giving a sexy but enlightened version of the characters – I think Harley with her new haircut looks absolutely fantastic and his Poison Ivy is drawn in such a way readers can instinctively feel the at-traction Harley has for her.

I think readers have been waiting for some time for the “Harvey/Ivy resolution issue”, and this certainly fits the bill – outside of their normal daily concerns and worries the two characters get to spend some desperately needed “alone time” on the beach, facing up their future and their past. Looking out at the sunset, Ivy and Harley both reflect on the things that stop them from stopping to check out its beauty normally. I like that we glimpse the mission which drives Ivy, her concerns of over-pollution and the effects of humanity upon nature – it is always so much rewarding a persona than “mindless villain.” Harley meantime speculates on post-apocalyptic sunsets and how stunning they will be.

After some gentle coaxing from Ivy, Harley tells the story of the soap bar heart turned up from “Mistah J”, and how her first evaluation sheet from the Joker wound up on her doorstep. The Joker is back to haunting the edges of her life. We flashback to Arkham, where Joker appears the same evil character he has always been, and Harley mentions that the evaluation sheet had been changed, no longer an evaluation of Joker by Dr. Harleen Quinzel, but Joker’s evaluation of her.

The oldsters come charging back from dinner to splash around in the pool, and Ivy and Harley wind up playing with them, (cue many, MANY inserts of plants and foliage and volleyballs protecting young readers from glimpsing delicate parts!) before the two of them retire to a quiet beach. Is this a dream, a barely awake Harley asks Ivy. I think it is, Ivy responds. A moment of peace for two characters always pushed against the margins of a bigger story.

Cut to the two girls packing up as their vacation comes to an end. This is a bit of a sad scene for Harley-Ivy shippers, but it’s also a very good scene.  The elephant in the room for many issues has been the possibility of Ivy coming to live with Harley full time, and while it’s always felt such a good fit, there’s always been the sense that Poison Ivy is a guest. She actually tells Harley a soft no in the sweetest way possible. It doesn’t take the greatest reader of themes to see the conversation takes place when both characters are clothed, back in their superhero (or anti-hero or whatever they call themselves) uniforms. That big story always pressing at the margins. Ivy loves Harley, but there’s a cause that is even needier than Harley and it consumes her life. Any reader of Batman for any period knows what that mission is. She’s trying to stop a devastation she sees destroying the whole planet. Poor ol’ Harley is sad but understands, just like she understands that every vacation has to end.

So it ends with Ivy flying away and Harley has a tear running down her face. I know this is obviously a bit of a landmark issue and I do hope Ivy resurfaces for guest spots. She is such a cool character and Harley and her play off each other so well. I saw Poison Ivy appear in a regular Bat-Book recently, used as the villainous foil, and it struck me just how soulless and empty that persona is compared to the more complex and affectionate character that has graced these pages of Harley Quinn, or Ivy’s own recent miniseries. I understand different stories call for different interpretations, but as her plane soared through the sky and out of Harley’s life, I knew which version I preferred. A kind of sad, kind of happy, but always beautiful issue.