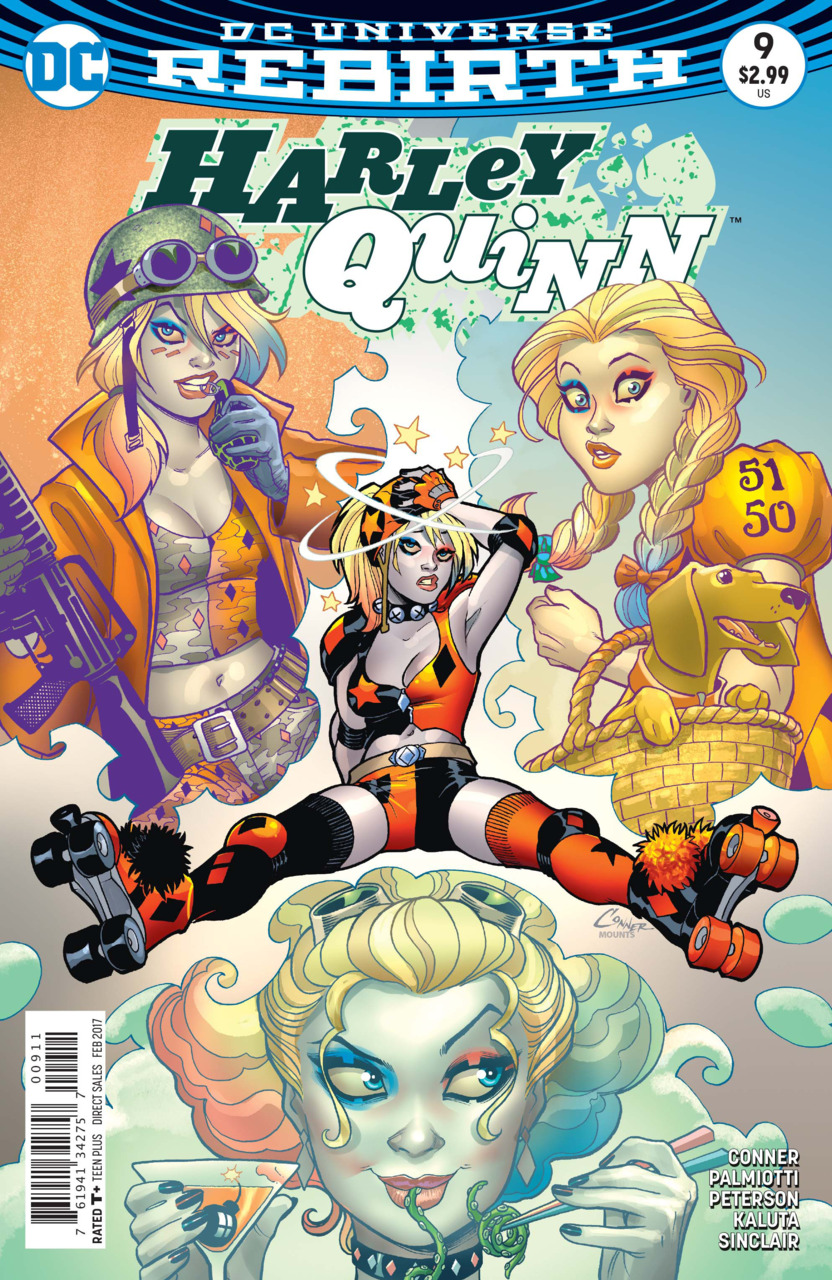 Springing out of the events of the “Bahamas Holiday Issue,” which both delighted and saddened Harley/Ivy shippers, Harley Quinn #9 turns inward, beginning by depicting a series of Harley’s dreams which merge herself and her supporting cast into personifications of Wizard of Oz, all the while being interviewed by Frank Tieri aka Simply Frank on the therapists couch!

We are off to a fast, funny start as Harley/Dorothy’s house falls down into Oz, squashing a certain Caped Crusader and we see a magnificent green witch float down to greet Harley, looking like a jazzed up Ivy mixed with whoever the Good Witch was.

Just like a dream, there’s an abstract quality to this issue , an early appearance by Mistah J, a cameo by Selina, and the comment by Harley “dreams are never linear.” Even though her session is at end, Frank advises Harley her chief issue is that she is has inner conflict. Her holiday hasn’t washed away all her problems or dread of the future. And where go to get rid of her displaced rage? The roller derby!

Once there, she bumps into an a hulking old rival, who she knocked out in an earlier issue. This time, the tables are turned and Harley is administered a beating in the derby ring, until a mysterious gunman blows away her rival’s skull! Harley is hauled away from the ring, and the action shifts again to her internal dreams…

This is quite a bizarre issue and credit has to be given to the level of inventiveness in the following pages. The style has a very “painted feel, the colors and images swirling into each other, contrasting a Suicide Squad style Harley “at war”, with a series of bomb about to strike, painted with Justice League icons. I guess if we want to do a bit of cut price analysis, this is foreshadowing for the up coming “Justice League vs Suicide Squad” events. I’m not really a big fan of Harley as a “baddie” or in her going up against the Justice League, especially with her being much more an anti-hero in her own book, but hey, what are we going to do, folks? Go talk to editorial! At the very least she’s as conflicted as we are.

None of this takes away from the beauty of the following pages. The bombs go off in a rainbow mushroom cloud. She is eating noodles with Poison Ivy cross legged and sitting on the floor. Playful word play ensues, and the images swirl and encircle Ivy and Harley. There’s something both intimate and other world about the images – reading the issue for the second time I’m honestly struck by the beauty of the art. It draws the reader into Harley’s brilliant, dazzling inner life. As Harley says, it’s all too much for even her to handle!

Harley and Ivy is an issue this book has danced around, and now Harley and Ivy lie together in a painting, Ivy telling Harley her emotions blind her from reality. Considering the impulsive nature of Harley, always a feature of her character, that’s hard to argue against. When they talk it becomes not so much wise as it is beautiful, but that counts. Harley realizes she’s dreaming the painting and awakens.

Back in reality, at friend’s apartment, the mystery deepens over who shot down her rival – she checks with a primary suspect, Red Tool, but he seems cleared of this particular charge, as he is busy dangling a guy off a rooftop. Interestingly Harley mentions she has a titanium plate covering half her skull, which was news to me, and I wonder if that will be explored in a future issue. She has a brain scan but is given the all clear. One thing that always strikes me about this series and is readily apparent in the reviews is how much bang for your buck readers get. Cut to Haley crossing the road to a pizzeria she’s not in there long enough to enjoy her first slice, before a gun welding robber enters the shop! In exchange for pizza-for-life, a classic Harley exchange, she disarms the robber in brutal and effective fashion, and exits stage left, before the cops turn up.

There’s a touching scene at the end which I won’t spoil which always reminds me that at the core is title is a character with a heart. And there’s one other big spoiler I won’t touch…

This issue was another solid entry and I felt it played a bit experimentally with the format in a good way – I found it a lot more rewarding on a second read through. This series goes from strength to strength and draws me further and further in as a reader.