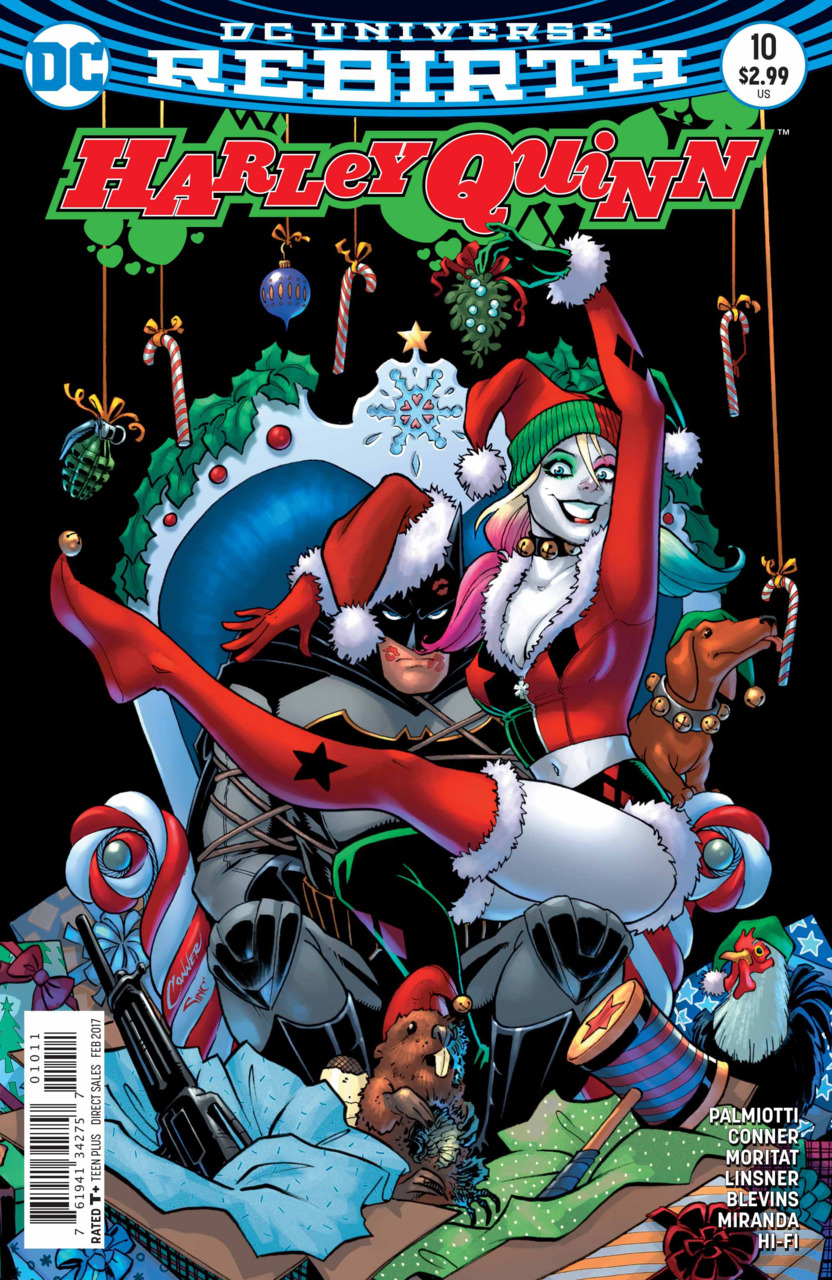 Harley sure loves Christmas and Santa! That’s the basic message of this bizarre and entertaining issue of Harley Quinn, which see’s Harley and her friend Red Tool go to the department store to meet Santa and get a photo with him. Once there, after arguing with the elf who delivered the news that Santa was sick and out of action, Harley rushes to New York hospital. The art is wonderfully cartoonish and Harley looks sexy and playful.

Once at the hospital, Harley finds out Santa is battling depression and inner demons and has sunk into a coma! The only way out is to shrink a regular human and inject them into the brain! Harley, who fears paper cuts, jellyfish, roaches, but not death, seizes the opportunity, giving Red Tool a little sugar before she goes in!

She’s injected into Santa’s mind, which is basically split into different locales in the middle of a freezing tundra, with each doorway represented by an igloo with an icon on top. Going through the reindeer igloo first Harley encounters dead reindeer and a monstrous dark figure with green hair (there is a fairly obvious Joker design influence.) Diving from that location back through a cocktail igloo, Harley finds herself in the sun and sand, where Santa is loving life, surrounded by bikini clad babes.

Chatting to Santa, seeking to get him to come back to life and his regular gig, it rapidly becomes apparent that Santa, kicking back at the beach, surrounded by the babes, is in no mood to return! But just as Harley warns that she will tell Mrs. Claus, and Santa seems happy to consign himself to a fate of booze and babes, the babes turn on Santa and Harley, controlled by the monstrous creature who is invading the beach reality! Harley proceeds to go hand to hand with the bikini babes, now totally possessed, before tumbling through a portal and escaping back to the igloos in the ice field.

Tumbling through another portal Harley finds Santa locked inside a bathroom with a battle-damaged elf! Santa is a pretty down on himself and Harley gives him a motivational speech, Jerry Maguire style, to pump him up. “How bad would Black Friday be without you?” she admonishes him. But nothing seems to cheer Santa up and when he says he’s done, the elf becomes possessed by the dark power, which declares Santa to be a virus in his own body, and the elf gets transformed into anti-viral executioners, dark composites of the Justice League!

Harley then realizes that while the dark spirit is reading her mind to create the twisted versions of the Justice League, she can create her own weapons and creates two flaming swords! She makes mincemeat of the opposition, Catwoman falling to the swords, and Batman getting bazooka-ed with a bunch of Xmas decorations. Meanwhile Wonder Woman gets choked out and she takes personal umbrage at the spirit’s personification of her precious Ivy!

After all this victory, Harley wakes up only to discover that she has been in the department store all along! She had never gone to a hospital but a few candy canes had hit her in the head and Santa has a line of noisy kids to get through! He’s still a little grumpy and Harley gives him a few sweet lines of encouragement to get him “in the mood”, and Santa finally relents, under pressure of Harley really making sure he won’t see another Christmas, and she gets to sit on his lap and tell Santa what she wants for Christmas!

This issue was definitely more of a standalone affair before the series ramps up again following previous events and the fallout of the Bahamas trip of Harley and Ivy, but this is definitely a fun issue in a great run and I encourage readers to jump on board Harley Quinn.

Some good Christmas-themed story-telling with a dash of trademark Harley naughtiness!