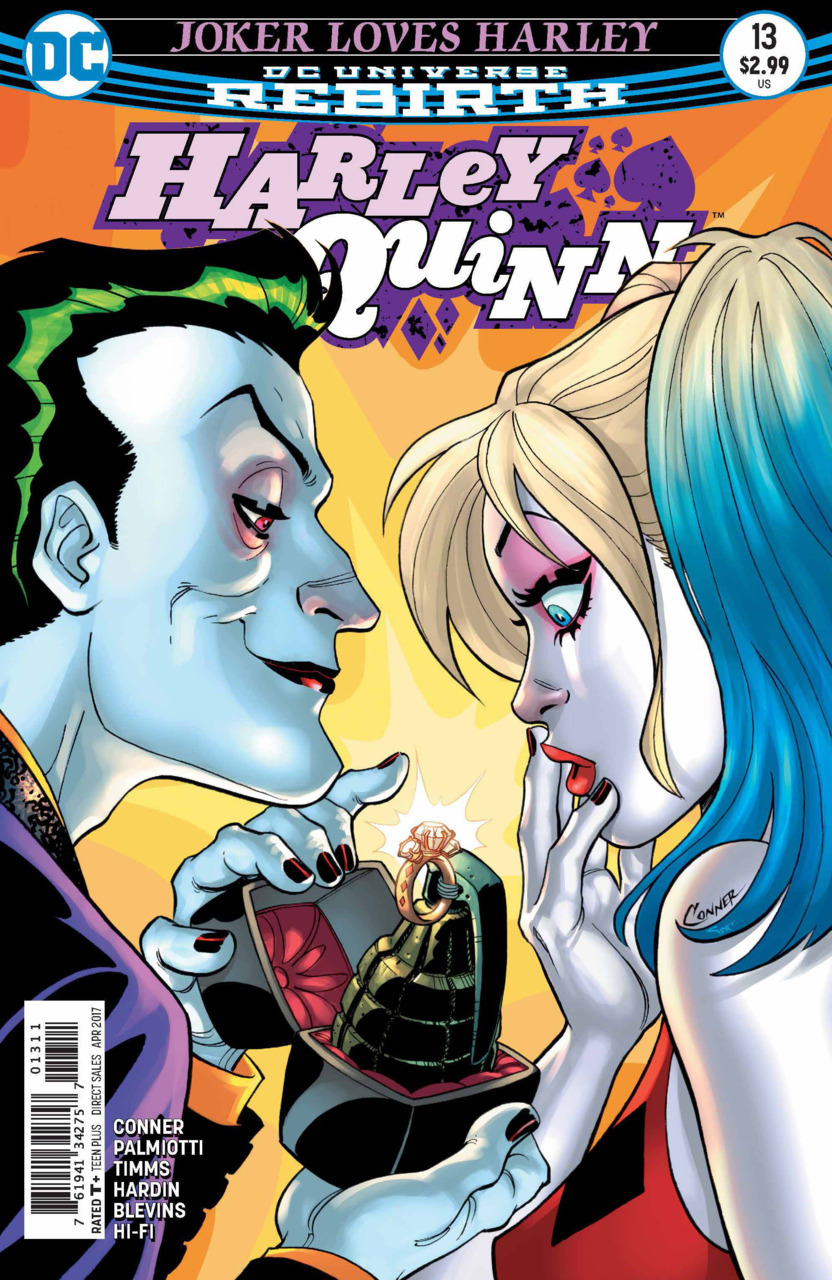 Harley Quinn #13 is a powerful, entertaining issue that basically features Harley interrogating this would be Joker who she accosted after Red Tool beat him to a pulp (and then she had a go) last issue.

The story starts with a series of dreams, imaginings that we at first take be to Harley’s dreams of an idyllic relationship with the Joker. From a white wedding (with a sighing Poison Ivy filling in as bridesmaid) to Harley having quadruplets, Xmas trees, the kids going off to university, Harley excelling at her career, and the Joker finally dying in his bed as an old man with Harley by his side, we then see this fantasy isn’t Harley’s, but instead this would be Joker, dazed by the beating he took.

Back in reality, Harley, with blade in hand, isn’t gentle in the questioning process, as it’s revealed that she had her suspicions all along that this Joker was not the “real deal”. The way he talks is close to the real article, the way he walks is close to the real article, but there are hesitancies in the way he responds, and Harley is suspicious of all this cloying romance that the prisoner is selling. As birds peck him towards his death, Harley sterilizes his wounds with vodka, as she swigs from the bottle, still in control as she targets him without mercy. He buckles finally, as Harley looks to take a bite of his nose and reminds him as the birds peck that she took his pants!

Harley decides as this faux-Joker confesses, to pull out the gang and break out the popcorn as she straps this wannabe to a torture machine. So they don’t thinking I’m going nuts, she says.

The tale pulled out of the fraud takes some telling. It turns out he is Ed, from an earlier issue of the New 52 run of Harley Quinn (issue #9), when wearing a police uniform and caged Harley, supposedly making her his pet. Harley obviously talked her way out of the situation, reasoning with Ed to give himself up, turn himself in, and she would visit him and eventually meet him on lunch dates etc. Unfortunately, time is fickle, and Harley forgot about his crazy antics (as have I) and he stayed in the nuthouse, finally graduating to the mail room where he intercepted a letter from the actual Joker, currently residing in Arkham. Getting an insight into the mad soul of the Joker, the misguided Ed struck up a correspondence with the Joker, gradually letting the mad man take over his already disordered mind.

Ed then undertakes extensive surgical procures in an effort to imitate and mimic the Joker – and then in essence become him, as he followed the Joker’s advice in trying to lure Harley with tokens such as the soap “Mistah J 4 Harley” heart. Ed is a first grade moron obviously, who never realized the Joker wasn’t paying him a favor – the Joker was trying from a distance to ensnare Harley in his particular brand of crazy. Needless to say, none of this impresses Harley who eventually ends his existence and the masquerade. As a side note, I couldn’t help wondering if this fake Joker, essentially a deranged copy-cat, is indeed one of the multiple Jokers that was revealed way back in DC Universe Rebirth #1? A smarter person than me might know. I could barely remember Ed!

Harley Quinn #13 is a revealing issue to close out an arc that felt necessary, but dangerous. I’m glad it’s over and I’m glad Harley ended it like she did, with a final bullet to his brain. The real Joker is still way back in the rear view mirror, but he’s some distance away. His machinations have essentially failed. Harley dodged and then dispatched a bullet this issue. She’s not messing around when it comes to the spectre of her former lover-slash-abuser, she’s not playing around when it comes to him. And when will she will be “okay”, as Red Tool wanted to know? Well, Harley isn’t predictable and it might be an hour with her pets, it might be five pizzas later, it might be after a few drinks – the girl isn’t predictable. And Joker, all, he’s back in Arkham Asylum, a crazy reflection in her rear view.