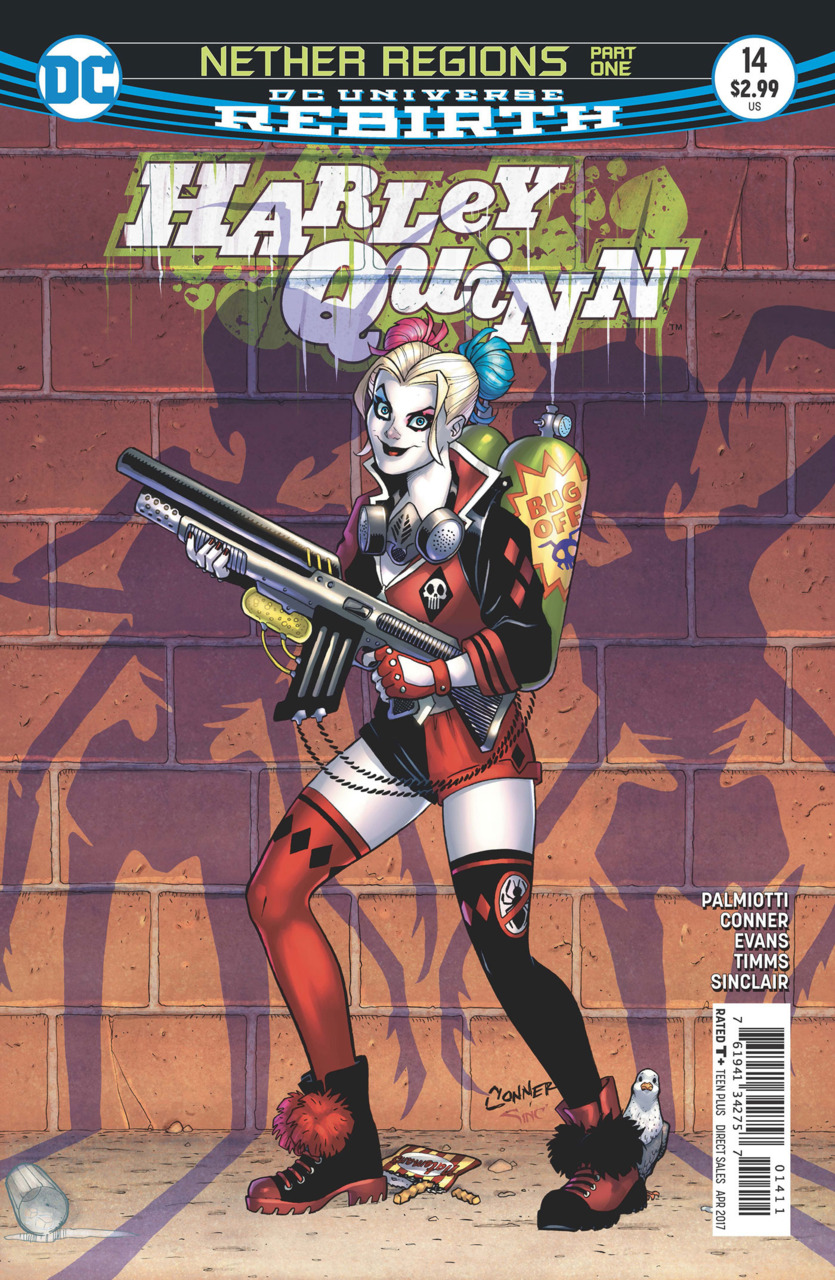 Harley Quinn #14 is an entertaining and quite nutty little issue that in the wake of the “fake Joker” arc the series probably needed. We start with a nice bit of set up with a group who seek to kill all the homeless in NYC by eating them. I wasn’t sure if these people were vampires or monsters, but I’m going to go with a probably one of the above.

Cut to Harley on her bike bringing one of the Gang of Harleys back to base in a motorbike that the Gang got as payment, and she comments that in light of all the recent events with the fake Joker and Ivy leaving, it feels like the universe is testing her. She needs to keep busy to keep things in order and her world in balance. I’ve always been struck by the busy nature of the Harley Quinn title and how that fits with the title character – impulsive, emotional and reckless, sedentary periods of introspection don’t mess with our Harley!

Suddenly a bunch of monstrous, giant green ants get hurled out of the side of Harley’s building. (“Ohmigawd! Cooties!” Harley screams.) These creatures are from the sealed and chained door that Harley opened recently. Red Tool tried to seal a door back up, but as Harley notes, maybe he didn’t do a very good job.

The ants speak their own mysterious language, obsessed and driven to bring back their master as they electrocute Harley (which wasn’t entirely unpleasant according to her!) and force Harley and her friends back to Sals, where she grabs some weaponry, including a sweet axe. After pegging the axe and taking out one of the weird giant green ants, Harley has a conversation with them, as they suddenly speak English and their master, Zorcrom, a giant white (naked) humanoid creature appears from beneath the earth. He wastes no time in crushing the life of one of the ants as Harley notes he’s not wearing any pants, a recurring joke throughout the issue. (Missus Zorcrom must be very disappointed’, Harley notes)

The ants try to run away as Zorcrom is busy eliminating them, and the cops turn up, with no idea what is going on. Zorcrom is pretty much invincible as Harley and her friend witness him tearing into the cops and tearing them into bits. Zorcrom seems to be from a place called Strata, deep below, while the sun shining on the surface of earth makes him more powerful with every moment. In a deliciously faux-political note, when he asks “where is your leader?” Harley guides him to the White House and a freshly elected President!

The comic then takes a turn to a new set-up, where Harley Sinn (a character I don’t remember, but she apparently appeared in Haley Quinn and her Gang) is transferred from Arkham and released on the understanding that she eliminate a target currently in a witness protection program. There’s another target as well and they then send Harley Sinn’s car off a cliff to maintain the illusion that she died during the transfer from Arkham. And the target is Randy Houser, Harley’s sometime love interest…

Meanwhile, Zorcrom is continuing to destroy Coney Island as he continues on his merry way to Washington, and there’s an interesting conversation as Harley explains that even though this is a super-powered problem which she set off by accident, she doesn’t have the cell numbers of the super-people on her phone. She can’t call Wonder Woman or Power Girl. That separates her from the legion of characters on super-teams, all the reserve members of Justice League and so on. And then suddenly there’s an appearance from a fresh and super-person, Atlee from Strata, out to take Zorcrom back into the cocoon she placed him in years ago…

A slighter issue than some others in the run so far but still a fun one, Harley Quinn 14 keeps the giggles coming while pushing Harley’s story forward.