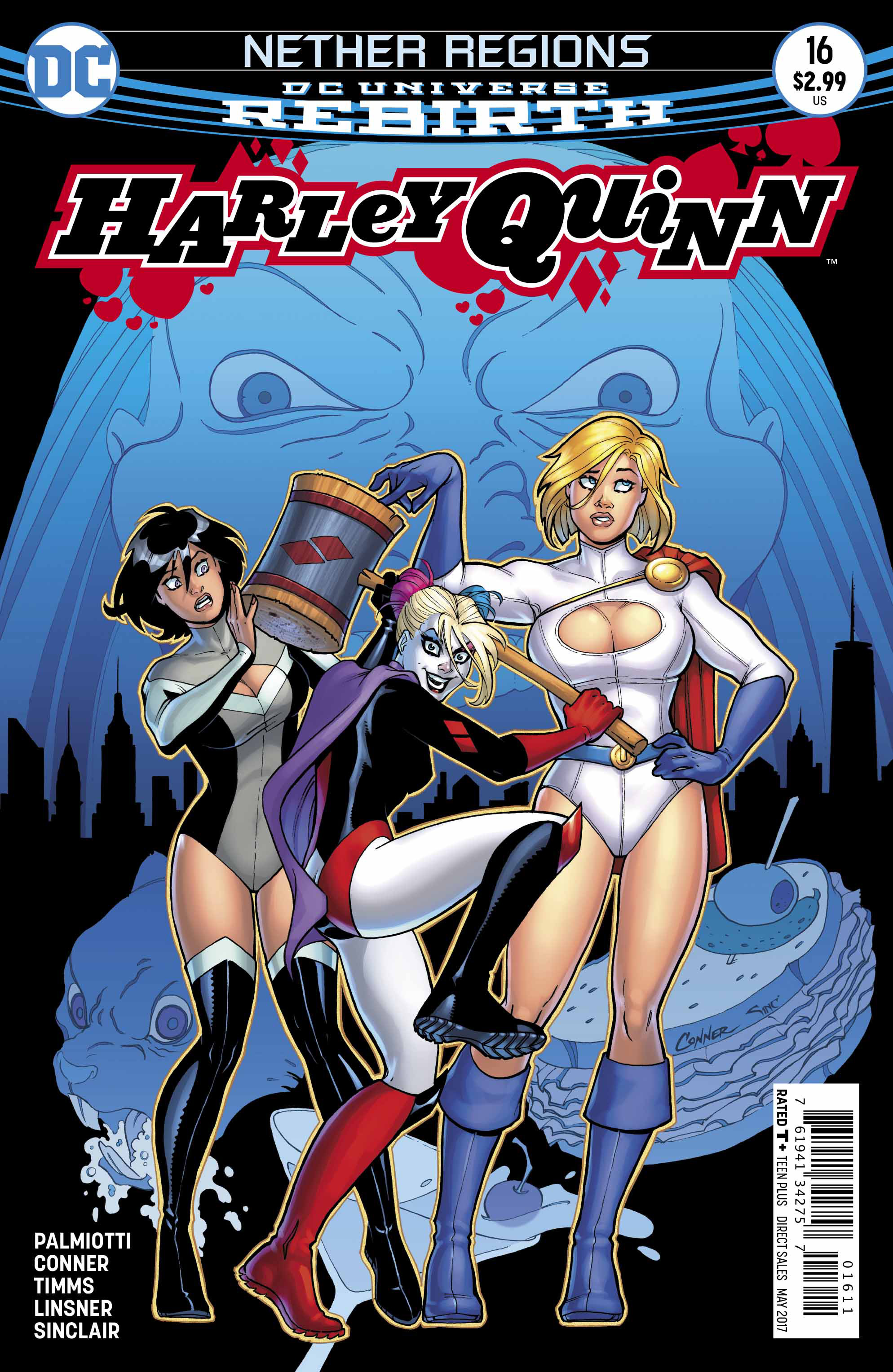 Harley Quinn the superhero, part TWO! Harley is an irrepressible force of nature who loves her crazy life. That’s evident from the first splash panel which shows Harley flung high into the air by Zorcrom, missing a passenger by a few feet. The beautiful and bounty (Harley’s words!) Power Girl catches Harley, our lovable hero’s nose nestled in Power Girl’s breasts! Power Girl gets Harley to break down the events so far, as Atlee, Zorcrom’s opponent, also hurtles through the air, tossed by the grumpy Zorcrom, who has having a grumpy fit as he had run out of pastrami sandwiches.

The action cuts forward to the Gotham City, in the year 2157. Devani, aka Batman 2021 is about to enter the arena for final death match fight for all the marbles against a vicious Batman clone. It’s a brutal, visceral match, and after an elbow to the face, Devani responds by ripping her claws against his face. The art, always strong on the Harley Quinn title, is especially perfect and suited to the ring-side battle, which see’s Devani demolish him and take the title of Number One Bat-Fan, much to the delight of her friend. The prize is going back in time to meet Batman, but Devani has another goal – going back in time to kill Harley Quinn, who MURDERED Batman!

Cutting back to the present, Power Girl, Artless and Harley, (who looks just like a super hero too in her cape and tights) discuss the situation. Turns out ol’ Zorcrom wants PeeGee to be his QUEEN. The ladies realize that his power is based on the sun and need him to expend the energy. Harley comes up with a nifty idea – Power Girl should take Zorcrom on a date! They do the tourist bus in NYC, Times Square, the ice rink, Zorcrom does a gratuitous Conan quote, and then they have dinner, before inevitably Zorcrom’s insulting demeanor and crude requests for Pee Gee to remove “her garb”, take things one step too far and Power Girl THROWS DOWN!

Meanwhile, across town, the other strange subplot concerning the potentially vampiric beings and the street people is continuing apace – this is one title that always has a few stories running at once!

In the meantime, Zorcrom’s power is diluting down, wasting away in the nighttime, while a bite by a certain rabid squirrel catches up to him! Even as the team discusses the various options of dealing with the once big bad blue Zorcrom, (now sickly and rabid Zorcrom) and Power Girl lectures Harley about not killing and the problems with throwing him into the Sun, the problem is answered for them, courtesy of a bus! In the wash up of the action, Harley and PeeGee exchange goodbyes and it certainly is a fun interaction between the two of them. The ying-and-yang of their relationship works well inside a comic book, and I’m reminded of the Power-Girl/Harley Quinn mini-series, which belonged to the same creative team and I would recommend to anybody who enjoyed this issue and their banter.

This is my favorite issue of Harley since the Harley/Ivy holiday issue and continues with the strong, funny and heart-warming stories we have come to expect from this creative team. The art was fantastic at conveying Harley as a superhero and there is a lightness to the storyline after the heavier themes of the recent false-Joker arc. Keep rockin’ it Conner & Palmiotti!