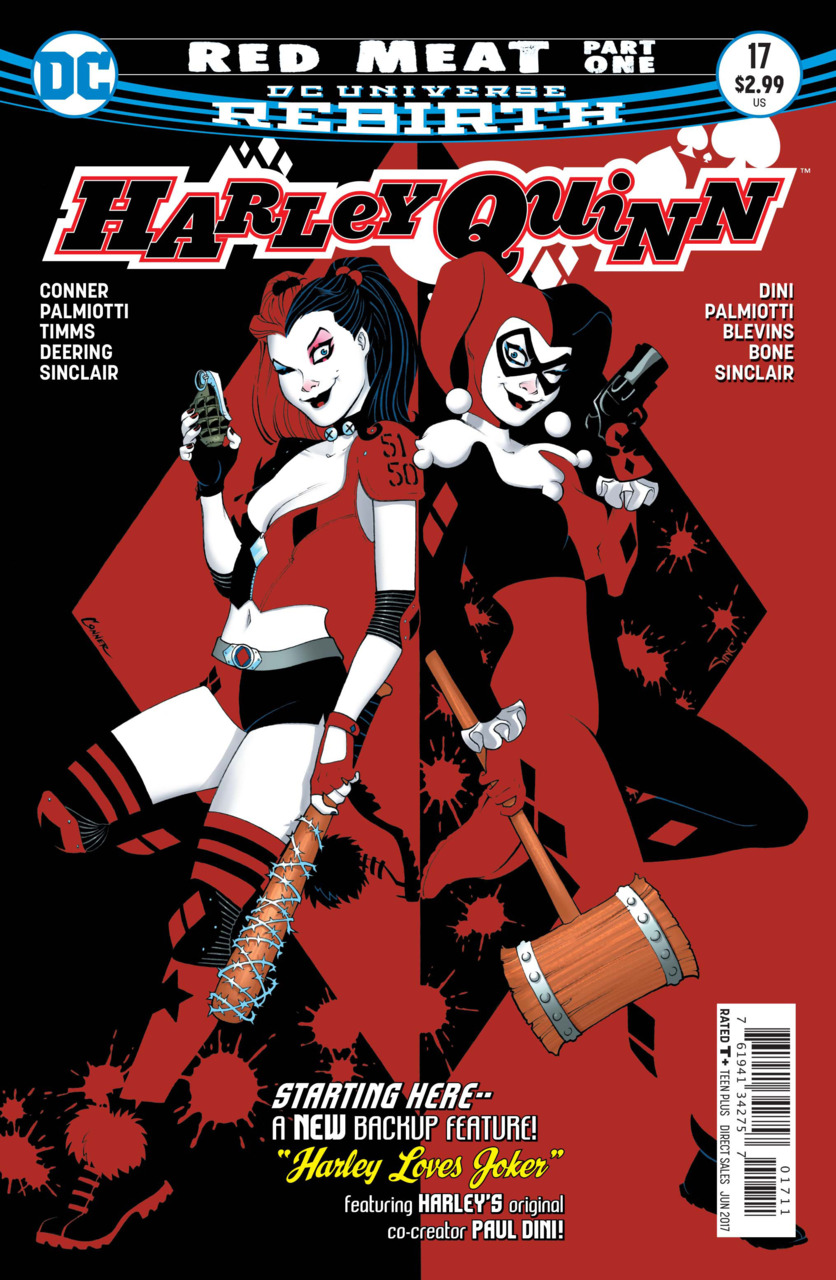 Harley Quinn #17 is a delightful issue that catches two different depictions of Harley, at opposite ends of her career! The issue kicks off with the mysterious organization kidnapping the homeless coming to Harley’s attention as she, Eggy and Red Tool stake out Prospect Park in Brooklyn, following one of Harley’s homeless friends, Skipper, as he goes missing from near her base on Coney Island.

This side of the issue features quite a long conversation between Harley and Red Tool on the fate of the homeless in a big city. It’s fitting. Harley is essentially in this series by Amanda Conner and Jimmy Palmiotti a naturally highly compassionate and emotional character, wearing her heart on her sleeve and acting on impulse, so it’s no surprise to hear her stick up not just for the fate of her missing friend Skipper, but also to draw attention to the plight of the homeless city-wide. It’s a measure of how far her character arc has traveled – even within the context of this run by Conner and Palmiotti – which Harley has grown to exhibit this level of empathy and sense of righteous vengeance. One of the cool things about the Harley character is her flexibility which DC has used well in recent years from her own title through to Suicide Squad, and when Harley steps up to a give a sound ass-kicking to a gang of youths looking to torch the tents of the homeless, it’s a strangely satisfying experience. Harley isn’t burdened by the tedious moral quandaries of many a traditional hero, she not only straddles the line between justice and gleeful punishment, she jumps over it! These youths don’t know what hit them!

In the background of this issue, as Harley is taken prisoner by the actual organization that is capturing the homeless, we see the subplot (Harley Quinn is full of them!) percolating in the back-ground of the freed assassin for hire, Harley Sinn, up to absolutely no good…for fans of the Conner/Palmiotti series thus far, it feels like things are speeding up toward a conclusion on both the homeless storyline and there’s also the fact her parents are coming to town…

Special mention has to go to the second section of the issue, where Paul Dini, co-creator of the character of Harley Quinn, comes back on board for a delightful beginning to a tale set back in the good old/bad old days when Joker and Harley were an item! Dini’s vision of Harley, complete with the gorgeous art by Bret Blevins on pencils, is a spell. Set against this cartoony backdrop, so akin to the Animated Series which gave birth to Harley, (her faithful hyenas are on the floor!) it’s fascinating to see the beats play out between Harley and Joker in this early phase of their relationship, where the gags are constant, the tickles are plentiful and still…still there’s that sense of casual cruelty to the Joker, or perhaps just disregard for his devoted lover. It’s enough to give the scenes some edge and some bite. There’s a slightly adult edge to the cartoon which adds to the enjoyment, an earlier vision of Haley through a different lens, proof of her flexibility which I mentioned earlier. Dini’s undeniable talent is on show and on song as in a few pages we fall back in love with this naughtier, less filtered early vision of Harley.

The issue itself benefits from the contrast between two versions of Harley and unlike many add-on tales which can feel forced and merely an excuse to increase the cover price, Paul Dini’s return to the character he co-created adds to the strength of an already powerful issue. As always it’s another very complete and satisfying issue of Harley Quinn – maybe the best book on the stands for DC!