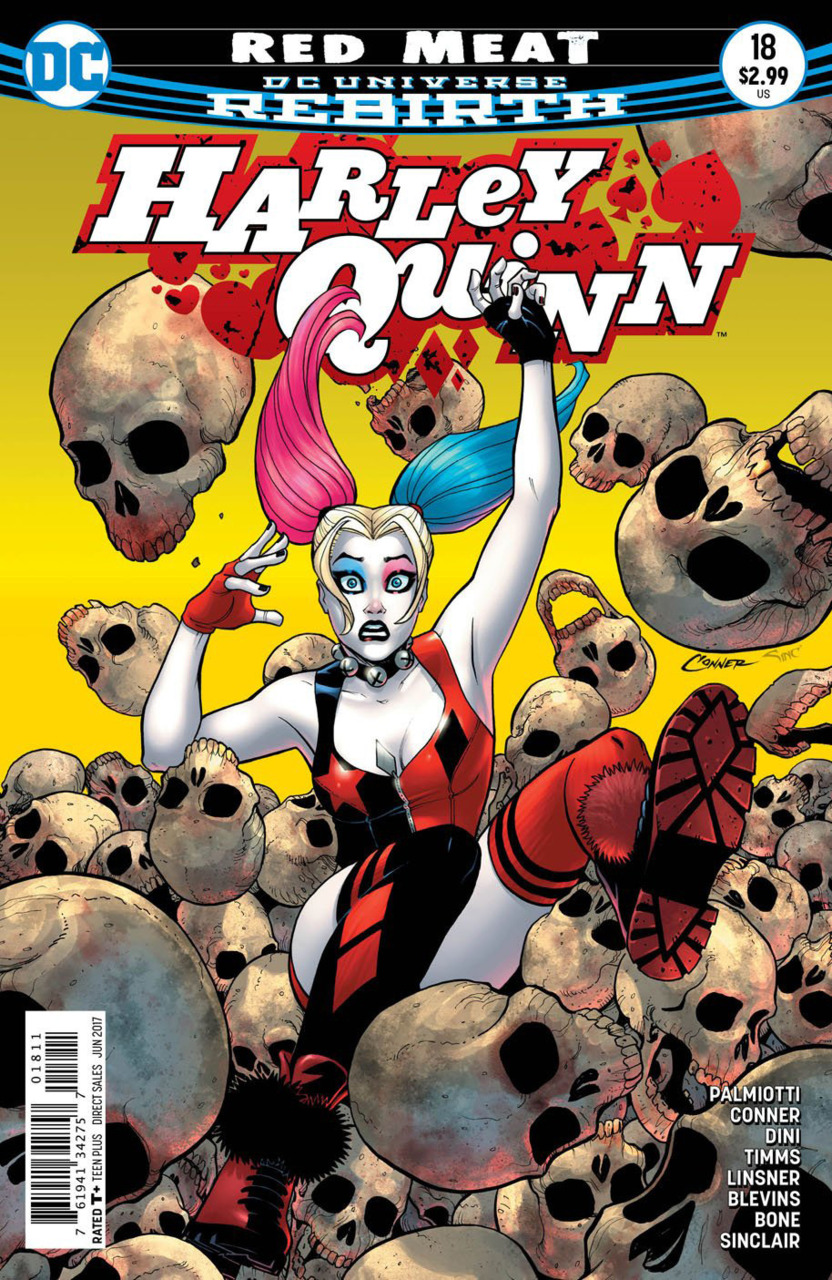 (Spoilers ahead) Harley Quinn #18 continues on the strong arc that has been going through the Harley title under Amanda Conner and Jimmy Palmiotti’s stewardship and as far as I am concerned, this is a series to watch. The action starts off in the year 2167, where Dev, the winner of the futuristic death-match of previous issues, is going back in time to eliminate “the most horrific of monsters, Harley Quinn”! Dev seems a very likable girl, with a strong fighting style and a clear sense of mission, and it will be fascinating to see how this story develops. It wouldn’t surprise me to see her and Harley hit it off in the end!

Meanwhile back in the present, our erstwhile heroine, Harley Quinn, has been captured by the mysterious and deadly group of cannibals that have been eating and eliminating their way through the homeless population of NYC. The mayor’s office is well aware that the homeless are no longer an issue, and are delighted to hear of the cannibal solution to the problem.

In the meantime, in typical cartoon-like fashion for this title, Eggy, Tony and Redtool attempt to rescue the chloroformed Harley from the hands of the cannibals who are escorting her in a van, even as Harley herself, no stranger to poisons and toxins, kicks and fights like a wounded mule, even as the chemicals send her to sleep!

It’s not often that Harley is at such a disadvantage, and Redtool quickly makes himself useful, truly becoming the hero of the piece, as he weapons up to bring Harley back home. And in the meantime it turns out the fine young cannibals might not be so eager to leave NYC after all…

As has been the case with all of the Harley Quinn series, the art is that fine mixture of cartoony with slick action scenes that consistently tell the story in a clear fashion and allow for each character to have their moment to shine. The difference in Eggy to Redtool is on the face of it quite massive, but John Timms on primary art duties is consistent and slick, while the colorization looks fantastic.

Turning to the backup feature, this is also an extremely strong and contorted piece of work by Harley co-creator Paul Dini. Paul Dini, for my money, has always been a high quality producer and he’s clearly at home with the Harley character. These vignettes at the back of the regular issues from an earlier time in Harley’s life, when she was essentially the Joker’s besotted girlfriend, are a very rich experience and show how even in just a few pages how much emotion and drama can be created! Essentially it’s now New Year’s Eve and Joker is planning a perfect crime, in which he will leave no clues, and let the Caped Crusader puzzle over who committed the deed!

There’s a naughty sexual playfulness between Harley and the Joker in these pages – it’s the same basic relationship from the Animated Series, but with an extra layer of sensuality and the appropriate level of criminal behavior. There’s a fun joke about fake fur, and in his own crazy deranged way Joker does have some level of regard for Harley, although as ever, it’s woefully short of a healthy level and is dwarfed by Harley’s reliance and need for Mistah J. It’s pertinent to note the hyperactivity of both characters, the Joker is almost unable to focus on anything for longer than five seconds, and Harley remains devoted to him. There’s a cute twist at the end and what can you do but smile…

Another fabulous issue of Harley Quinn!