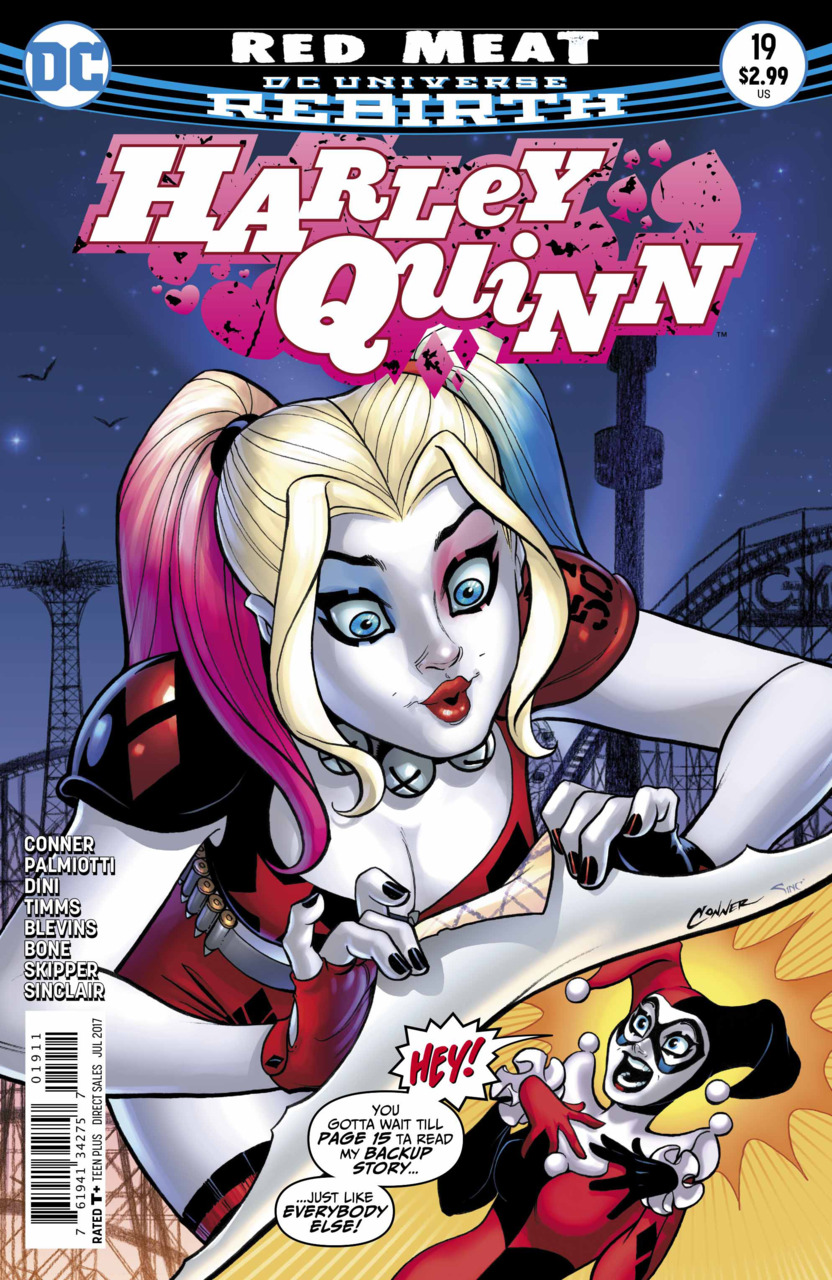 (Spoilers ahead) Harley Quinn #19 kicks off with Harley caught and imprisoned by the cannibals who have been merrily eating their way through New York’s homeless population. In a nice touch, in keeping with Harley’s affinity for inanimate objects, her friend Skipper, now minus skin and part of the collection of bones the cannibals have discarded, keeps up a lively conversation with Harley. It’s a bizarre little moment that fits the story and the character.

As Harley re-equips for the battle to come, courtesy of a handy weapons cache, Redtool meanwhile is launching a frontal assault! Displaying a trademark display of tactics he fires a massive rifle/rocket launcher that not only takes out the doors it sends him flying off the skyscraper! Recovering fast, Redtool launches a grappling hook that skewers the advances of a repulsive employees sexually harassing his female colleague, and Redtool stops his fall, smashing into a flagpole and surviving barely.

Meanwhile, negotiations between the Mayor’s loyal rep and the cannibals who solved the homeless crisis (by eating them) have come to a sticking point. The cannibals demand access to the prison general population, so their feasting can continue. When the Mayor’s rep describes how insane they are sounding, the response is a chilling one: “Deliver our message or become our next meal.”

The art in this issue is trademark superb. Rarely has Harley looked both so sexy and so dangerous as when she emerges to confront the cannibals and the Mayor’s rep. I always enjoy it when Harley teeters between her playful side and her more dangerous, primal level – in this incarnation of Harley it’s something writers Conner and Palmiotti have utilized well, and the art sets it off perfectly in an almost full page splash. The justice and violence Harley dishes out is comprehensive and lacking in mercy – once angered, Harley is a weapon and that’s a lesson her antagonists know all too well! More credit has to be given to John Timms’ art in the fight scenes – the action springs off the page, littered with cool sound effects, that give that extra dimension of “action meets technicolor crazy” that works so well in this book.

Tempted by the lead cannibal to “give it her best shot”, Harley does, whacking him with a hammer across the face, but this hungry hippo doesn’t go down easy. It gets REALLY hardcore between Harley and her opponent, ending with Harley biting off his eyeball! In the end, it’s a win by KO to Harley Quinn and the lead cannibal is out for the count. Meanwhile, the cops finally arrive and Harley’s special envoy is appreciative of the work she is doing. He talks about the city needing a hero. Doesn’t it already have heroes aplenty, Harley asks? The people however, identify with Harley’s brand of spunk. But when Harley learns that being a hero in this town doesn’t mean a penthouse suite or complimentary steaks for life, she decides – under the radar it shall remain! And in a move sure to please Redtool fans, when the two are re-united, along with Eggy, Harley decides she forgives him “for whatever I was mad at you for!”

The second part of the story (alluded to in a delightful fourth wall breaking cover by Amanda Conner) continues the awesome Harley and Joker mini which has been going through the issues, co-written by Harley co-creator Paul Dini with Jimmy Palmiotti. The comedy and love for the character sings of these pages. Hilariously Batman has tracked Harley and Joker because the return address was included on the label of her Harley Christmas suit! What follows is a clownish fight where Harley bounces across the room, smashing into inflatable toys and the Joker himself. The comedy is broad and amusing, complete with gags and pratfalls. Caught up in a net, Harley calls her pet hyenas to rescue a prone Joker from the Big Bad Bat.

Making their getaway clean, the two lovers have a moment of tension where it appears that Joker is willing (and he is) to blow up the apartment along with Batman and the hyenas. We see a true glimpse into Harley Quinn, a core of her that rings true in every good interpretation of the character – there are things she cares about, it’s not all an empty dance across skeletons. “Do this and I’ll never forgive you!” she wails, and the Joker, more by fortune than design, doesn’t do it, and the pet hyenas wind up back in her arms, and the lovers are happy once more.

Harley Quinn is running two strong stories back to back and this continues with the extremely strong series of issues we have seen in the Rebirth run.