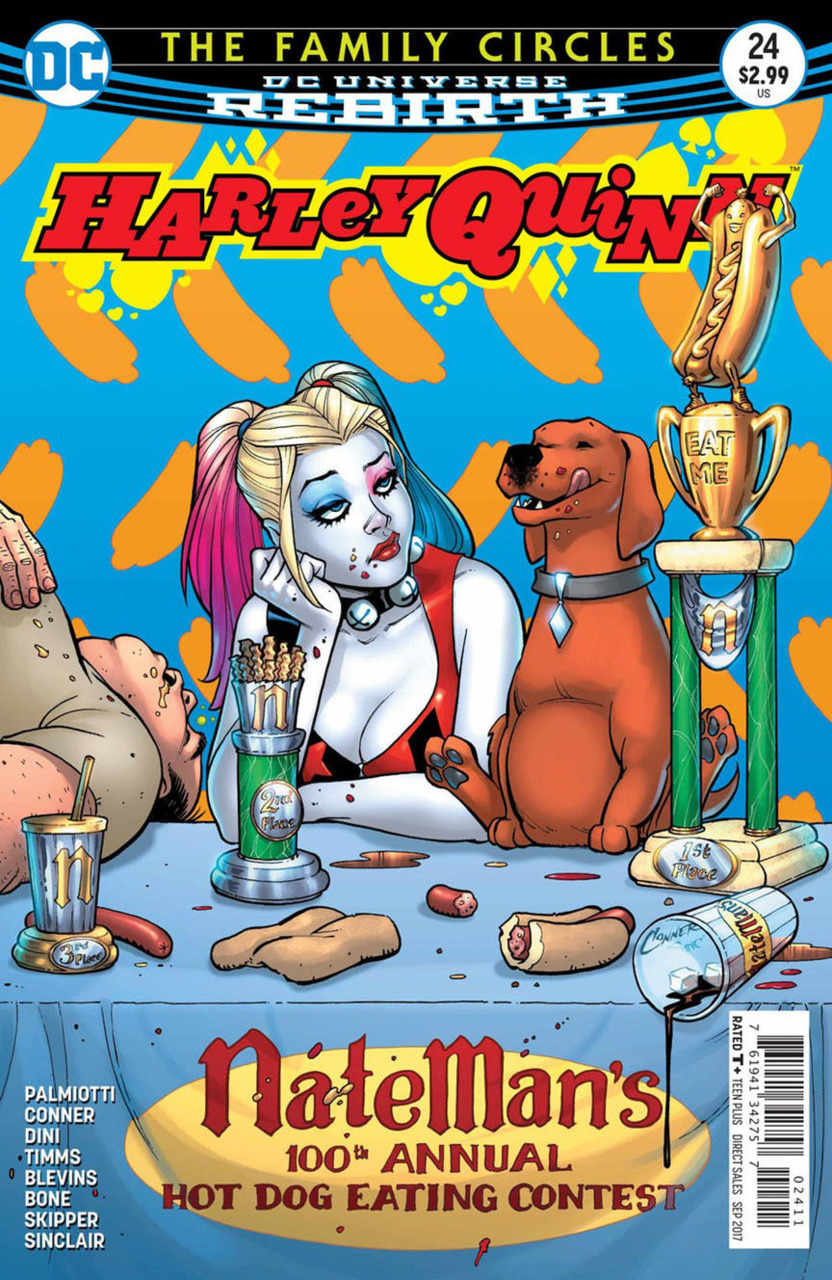 (Spoilers ahead) Harley Quinn #24 continues and concludes the Family Circles arc which has featured Harley’s parents coming to town. Last issue Sportsmaster and Clock King made a bad decision in attacking the boat where Harley was dining with her parents and Goat Boy. Their attack is both hilarious and slightly pathetic, as befitting two C list hitters. Still, Sportscaster got a good net around Harley, after she calls him a few colorful epithets. Turns out Harley’s dad is a bit of a badass, as he pulls a piece and goes to rescue his girl.

After the incident is over, I noticed some lovely art featuring Harley in a robe giving an interview – there’s a certain charm to the character models in this book, and Harley is hilarious in her comments which break up the reporter’s flow, shouting out to “the evil Batman” and calling her the Pinnacle of Humbleness! Soon after, Harley is chowing down on desserts (as Sportsmaster and Clock King foolishly had interrupted the gal’s dinner) as her father tells her how he set up Clock King with his hot gun. The next joke, where Sportsmaster and Clock King teleport off the boat and straight into the bathroom of a certain buxom blonde superhero is obvious but funny, and brought a smile to my face.

The subplot between Red Tool and Devani from the Future (as she is in my mind) continues to boil along – there’s a moody shadowy art to these passages which suits the story well and it’s an effective break in the action and mood from Harley’s main story., which has a different, almost elegant style to the character models. Harley and her mother share some quality time and get a chance to explore that relationship, and her parents view of Harley, both in the past when she was with the Joker, and in the present, where Harley is moving forward, further and further under her own steam. In what’s essential a comedy-drama book, sometimes Conner and Jimmy Palmiotti hits us right in the feels with the character moments inside this run. This section of the issue ends on a minor cliffhanger as the chick from the Mayor’s office is hiring somebody known as “The Unconquerable 25” for a very special job i.e. a hit on Harley!

The second portion of the comic is a continuation of this awesome tale involving Harley as she seeks to build an awesome lair for her and Mistah J, set back in the past when Harley was still in her original costume, with Paul Dini and Jimmy Palmiotti co -writing. Amusingly we are plunged right into a cartoony catfight between Harley and her pal Jenna, who has been hired to renovate the lair Harley bought at a steal, with Harley forcing the project waaaaay over budget courtesy of a few too many ideas ripped from the pages of home improvement magazines! She can’t help it, she’s enthusiastic. Anyway, I like Jenna, she’s a cool character with an attitude all her own, and the fight over the three million dollar bill is brief but intense, with Harley welding her hammer and Jenna quite literally has a chainsaw! Anyway after a quick round or two, the girls come to an agreement, when Harley has to admit Jenna’s strategy of placing six incendiary bombs throughout the construction, which she will set off in lieu of getting payment on time, is actually very clever. It’s good to see them back on good terms, as I like them both and their friendship is cool. Before this mini story I’ve never heard of Jenna, who I believe is an associate/underling of Mad Hatter, but based on this little tale, she’s one of my favorites!

But all this still leaves Harley with a little problem, namely coming up with a cool three million! She starts a string of bizarre robberies in ape suits, hitting a fast food burger drive thru for cash, and she’s none too happy when she comes back to Mistah J, who is parked in front of the TV, making fun of “some loser in an animal suit” performing the stick-ups! Tempers flare and she sleeps in the other room, and Joker starts to have his suspicions that something is going on under his watch…

By this point the fact that this run by these creators is going string on all cylinders shouldn’t come as a surprise to readers, but it is a comfort – in an uncertain world, Harley Quinn remains among the absolute best DC has to offer.