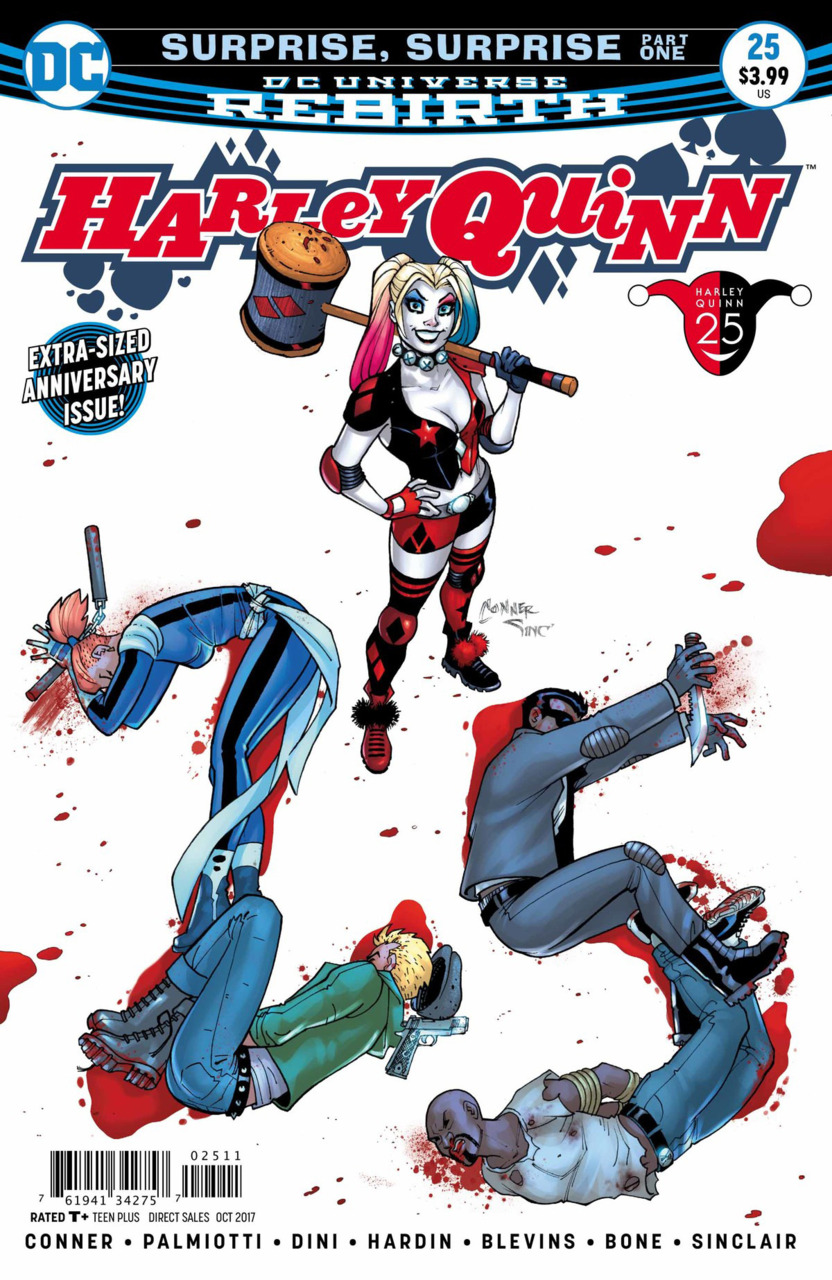 Synopsis (spoilers ahead): Harley Quinn #25 opens up with the Unconquerable 25 closing the deal for the hit on Harley, while meanwhile Harley and Sy are at a spa, soaking in the heat as Sy makes a series of amusing and unforgettable comments about his sexual prowess! The two exit the spa and see a punk accost a youth’s bike – Harley promptly throws a shoe at the offender, taking him out of the equation. After some chatting the two wind up back at Harley’s apartment, where a whole bunch of Harley’s friends, including Poison Ivy and Selina aka Catwoman , throwing what Harley thinks is Sy’s surprise party! But REVERSAL! It’s actually a surprise party for Harley who is celebrating her birthday in a couple of weeks, and would have guessed the surprise if they had flown closer to the date. Everybody is there, including all of Harley’s regular crowd, Eggy, Tony and the like, the actual Gang of Harleys, and the girls from Harley’s roller derby team, who engage in a close team huddle.

Harley plays a game of pin the tail on the donkey, (or at least Harley’s version of that game) and as the night has worn on, with some/many beverages consumed, Harley winds up accidentally jumping out of a window, seemingly to her death, only to wind up in the lovely arms (and breasts) of Power Girl herself! After Power Girl quickly gets sick of Harley and tosses her back in the window, PG flies off on another mission, and suddenly the Unconquerable 25, launch a savage attack on the party goers. Sadly for the Unconquerable 25, they make the mistake of thinking Catwoman and Poison Ivy are cosplayers! That may come back to bite them.

Harley amps up as she finds her bazooka, blowing away a few soldiers, before plunging into the fray wielding duel pistols! Rightly, she freaks the opposition out. The fight is fiercely fought, and Harley has one of the Unconquerable 25 with her pistol in his mouth, as she is encircled by the survivors. Meanwhile Catwoman and Poison Ivy are up on the roof, scoping out the situation and how to help, when a gunship appears, bearing down on them.

In the backup story by Paul Dini and Jimmy Palmiotti, we see the wrap-up of the compulsively interesting Harley and Joker take, where Harley finally tells Mistah J about the hideout she’s had built. But as readers know, she’s six million in the hole to her construction friend, and must pony up with the money within seven days, or the whole place is being blown to smithereens.

Analysis: First up, I found it curious in the greeting scene where Poison Ivy and Harley meet at the surprise party that it’s an oddly almost chaste kiss shared by the two, as Harley’s lips are diverted ever so slightly from Ivy’s lips. The more you look at it, the image feels like a delicate bit of censorship. Harley and Ivy are lovers, that’s no secret and it’s been confirmed in story and by the creative team, so why this exercise in slight prudishness? Who really cares or wants their relationship to be confined to “off the page”? Not most lovers of this book, I feel. I’m definitely of the mind that’s it an editorial call, and in a book that so celebrates Harley’s sexuality and growth, I think it’s a bad beat. Nevertheless, this is a minor issue and probably not a worth a hill dying on.

The story itself is well told and fluid with great slick art by the creative team of Chad Hardin on art and Jimmy Palmiotti and Amanda Conner on writing duties – this dynamic lineup has hit out of the park for twenty-five consecutive issues and haven’t missed a beat since Rebirth. We’ve come to expect great things from the Harley title and it continues to be an A list book on the DC line. It’s the first book I read every week. The backup story has also been told at a high standard and it’s thrilling to see that this will be continued onto a Paul Dini led “Harley Loves Joker” book. Considering the tone and gorgeous art of the backup fingers crossed we see that same creative team be pulled onto that book.

Final Thoughts: An extremely fun issue which keeps up the pace on an excellent book. Grab it while it’s hot kids!