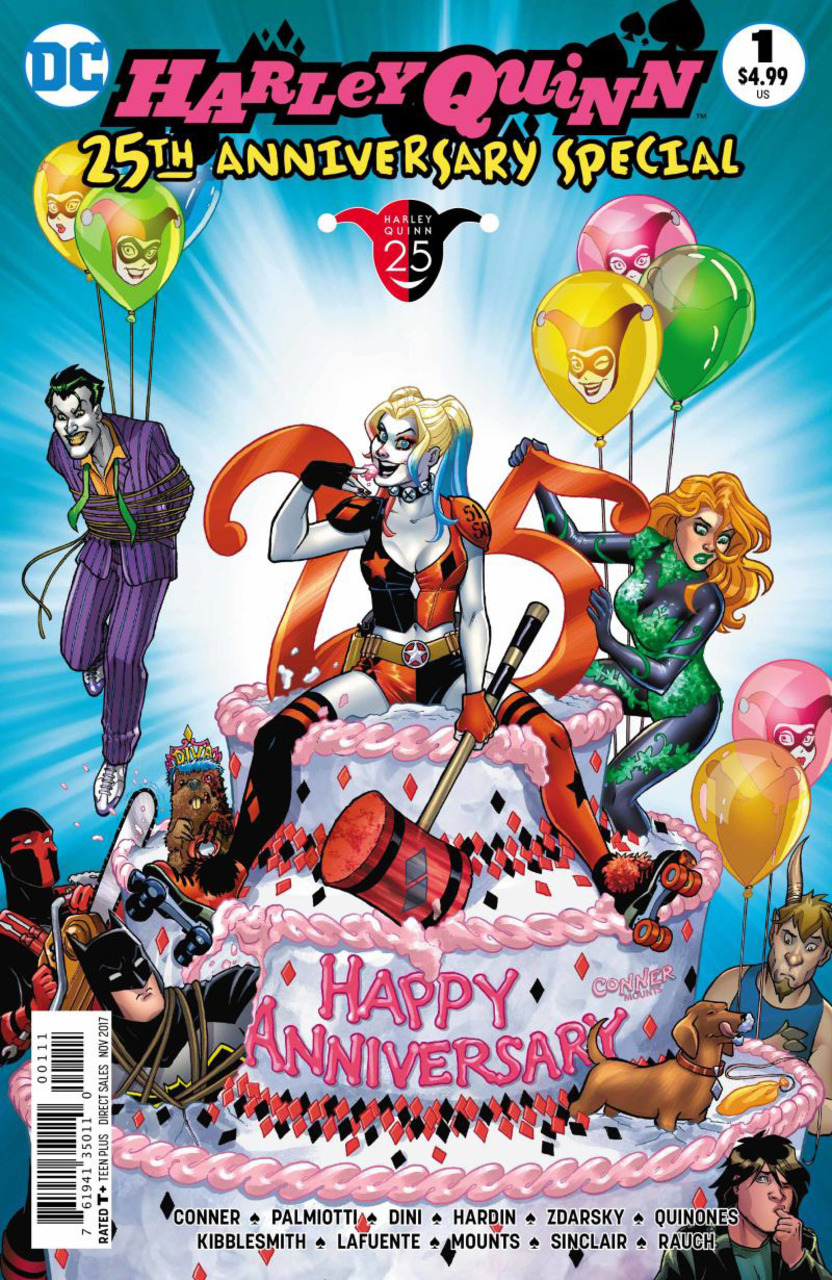 Overview: Harley has her 25th birthday and it’s a selection of great stories including Harley, Catwoman and Poison Ivy got to Vegas, while in another story Joker throws Harley a surprise birthday party, and Poison Ivy and Harley face off against Swamp Thing!

Synopsis (spoilers ahead): The action kicks off with Harley telling a “Truth or Dare” story to Redtool, her friend and fan, about the time she, Poison Ivy and Catwoman went to Vegas. As they are driving there in a convertible, with Harley and Selina in the caravan behind, Ivy accidentally foils a casino heist, and the casino owner is so appreciative that he gives the girls two nights in the presidential suite, everything on the house! Before you know it, the girls are installed in the suite and loving life, but Harley, sprawled out on the couch with wine bottles and cookies, is BORED and wants some action! The butler confirms there is a variety of options from restaurants to singers of every kind, and Harley decides she wants to throw a PARTY! As expected this is all kinds of crazy, as she orders (among other things) sixty pizzas, a bazooka, circus animals, sixty showgirls, male strippers, a motorbike etc, etc! The part explodes into chaotic fun (which would be Harley’s alignment in a role playing game surely) and eventually they take the party on the road, not before the casino owner drives through the window and down into the fountain!

The next story, by Paul Dini, has Harley has the “birthday blues”  as she reminisces over a succession of bad birthdays from childhood to the present in the story, which takes place during her relationship with the Joker. There’s a neat twist in this issue and it turns out Harley gets a surprise after all!

The third story involves Swamp Thing, Poison Ivy and Harley and is definitely the strangest of the bunch. Basically Harley ends up giving Ivy mouth to mouth after Swamp Thing gives her too much Green Power – then we see Harley at full Green power and together the three of them punch a hole in the eye of a hurricane with a massive hammer – disaster averted!

Chip Zdarsky writes the final story in this collection, “Bird Psychology” which features a typical Batman vs Joker plot device setup, but instead shifts the action away to Harley vs Robin. It’s young Robin, probably Dick Grayson, and we are reminded that Harley is a psychiatrist in her former life, as she performs some fairly on point mental assessment of Robin’s place in the world as they fight, ultimately serving to distract him and win the battle, while also foiling the Joker’s magical plot herself. Robin is left scratching his head, no doubt realizing there is more to Harley than just being the Joker’s girl.

Analysis: As a collective piece, these stories sing. As an issue all together, it feels like quite a deep, fat collection. Weighing in at 38 pages this feels like MORE comic than that. Each story has it’s own strengths and it’s a fitting way for Harley to bring up 25. The opener from the Conner and Palmiotti team is hilarious, and it would be a hard to find a reader who doesn’t respond to the Harley/Selina/Ivy combo. The art by Paul Mounts gives that beautiful cartoony style which resonates so well with both these characters and the fantastic scenes of the party. There’s some very cool panel layouts which highlight the zany, creative energy of Harley’s mind and the party which spawns from it. That casino owner had no idea what he was in for! Just as a Harley and Poison Ivy fan, I chuckled when both of them was palming money at the start, even as he congratulated them on foiling the robbery!

The Joker surprise birthday party story, “Birthdays Blues” is a nice examination of Harley’s sad past, but it ends on a fun note, and left a smile on my face. Again we are exposed to the fact that Joker is essentially a pretty mean guy, but Harley is the opposite and has some nice friends such as Ivy, who do have her back.

Some mention has to go to the pinups scattered throughout the book – many of them are truely exceptional. Babs Tarr provides a fantastic Gotham City Sirens pinup, and that’s not the only one that drew my attention as a reader. There’s an anime influenced pin up by Kamome Shirahama which runs with Harley’s look in Suicide Squad and is totally on point.

The Poison Ivy/Swamp Thing story with Harley by Daniel Kibblesmith and David Lafuente is definitely the strangest of the bunch, but again it hits on all cylinders – given that the other three stories are more conventional, the anthology style lends itself to one story feeling a little more indie and “out there.” After all, Harley is a little out there herself! The basic storytelling beats are pretty strong and it’s a cool, wacky adventure.

Finally, Chip Zdarsky’s story is definitely worth a mention – the interaction between Robin and Harley is well worth talking about and displays a side of Harley “in the field” we often don’t see – rather than just being ALL impulse, the Harley in this story uses her talents as a psychiatrist to verbally disarm Robin and distract him as she beats him in combat and pings him with her baseball bat. To me this was an interesting part if the Harley mythos that I haven’t personally seen often. I also found it intriguing and very true to her character that once she won, she didn’t let the bomb go off, she didn’t really want people to die, she doesn’t want Robin to let down Batman, even. I thought Chip Zdarsky did a lot of good work in this brief powerful story. I could see this topic and this interaction being explored further and it was avery strong way to end this anniversary issue.

Final Thoughts: I can’t think of a better way for Harley to turn 25 than in such a classy fun issue which plays around with stories from all her eras and gives readers of all ages something to enjoy and have fun with! Here’s to 25 more years!