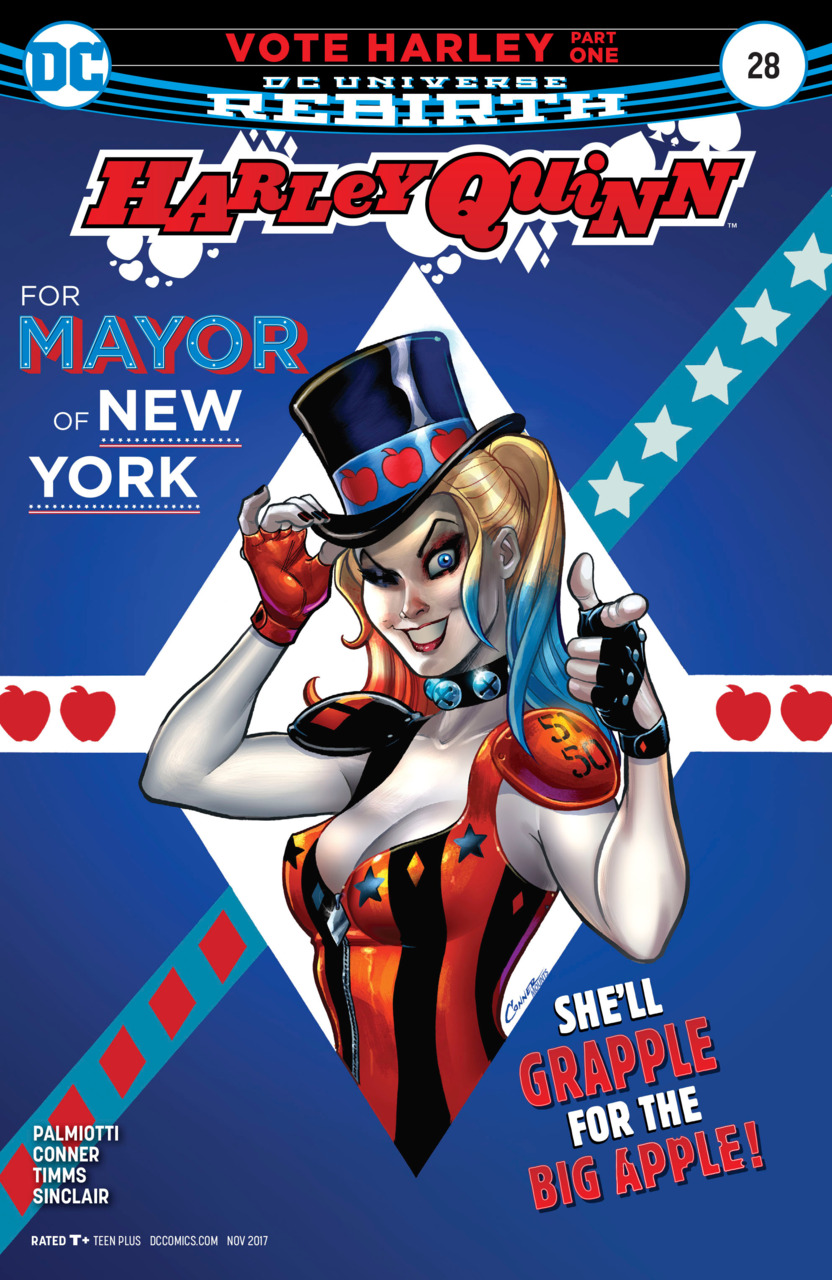 Overview: Harley has decided to run for office, the Mayor of New York in fact! In this issue Harley quits some of her side-projects to focus on her mayoral bid and along with Poison Ivy she busts a stolen car ring in an effort to boost her profile.

Synopsis (spoilers ahead): Coming hot off the events of the last issue and the defeat of the Unconquerable 25, Harley is serious about her mayoral ambitions, and enlists Ivy and Harlem Harley to infiltrate a major stolen car ring operating inside the city. In doing so Harley quits or at least suspends some of her extracurricular interests, namely working as a therapist at the old peoples home, and also taking time off from her roller derby antics for the time being.

Meanwhile, Madison is reporting the bad news of the Unconquerable 25’s fate to an irate Mayor Deperto, (who was enjoying the bedroom pleasures of two ladies) as she is quickly ordered to go down to the police station and take care of the one remaining survivor of the Unconquerable 25 – the leader. When the corrupt police there won’t do the deed, Madison herself plugs him with one in the head and two in the chest – the woman is nothing if not committed to her boss and saving her own hide!

But not all is well with the great plan of Harley to infiltrate the car ring. Trapped in the trunk of a car with Ivy and Harlem Harley, the sting is almost a profound bust as Tony tried to talk his way out of a sticky situation when the car thieves open the trunk of the car to see Harley, Ivy and Harlem Harley, all stuck inside, crying out “this a bust!” Luckily Harley has a gun which she uses to eliminate some of the goons, almost deafening herself and Ivy in the process. Poison Ivy also has her control of plants – the two combined make a formidable team and before you know it, the gang are all out and blasting their way through the car thieves, while a valiant Eggy just makes it in time to see Harley and her compatriots reveling in victory. Police Chief Spoonsdale congratulates them and Harley announces to the press she is running for Mayor!

Meanwhile, Madison, fresh off killing the leader of the Unconquerable 25, has arrived at the Mayor’s house who has almost strangled her to death in his anger. Luckily for Madison, she has procured a certain phone number to call to hopefully prevent this Harley Quinn problem from growing even more problematic for the Mayor, that of a certain Dr. Jonathan Crane, aka The Scarecrow himsel

Analysis: There is definitely the feeling of Amanda Conner and Jimmy Palmiotti closing up some of the older subplots with the roller derby and old person’s home, to focus on Harley’s newest challenge for the central arc of the book – that of the bid for Mayor. Even so, they do it with taste and a soft touch – there’s genuine emotion in both scenes, which shows the many-sided personality of Harley – a well loved and compassionate therapist to the old folks, and again a well loved team member and combative player in the derby rink. Both of these sides of Harley add to her character, giving her an energy and extra dimension which we could argue simply wasn’t in full view before the start of this run. In some ways it’s amazing how developed this character has become under the reign of Conner and Palmiotti.

Final Thoughts: Always a strong character with a strong sense of identity, the continued evolution of the character since the New 52 into Rebirth has been one of the best things to happen at DC. The bid for Mayor is certain to be both rocky and wildly entertaining for both the long term and newer Harley fans. This truly is a book to look out for every fortnight!