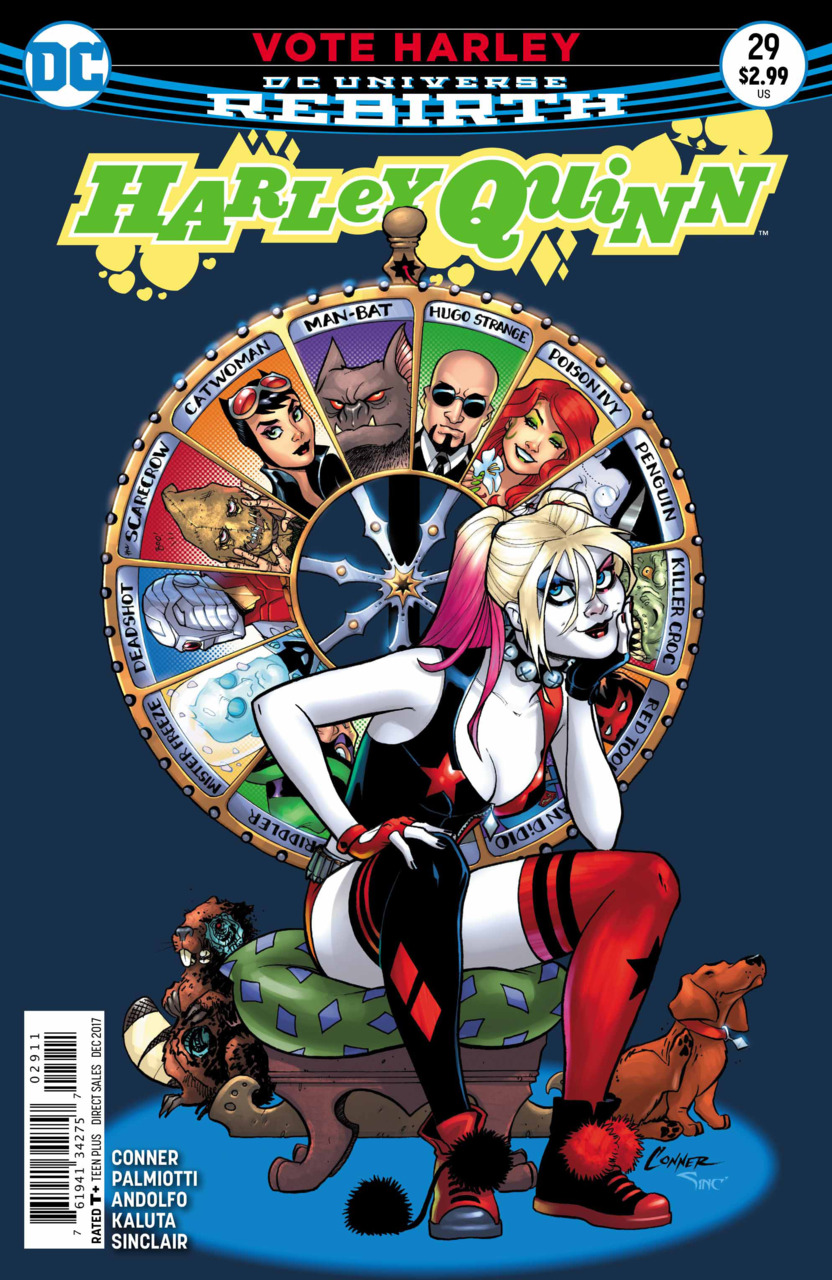 Overview: Dr. Jonathan Crane, aka the Scarecrow, comes to town as Harley expands her campaign to become Mayor of New York City and joins a Mayoral debate!

Synopsis (spoilers ahead): The action kicks off with Dr. Jonathan Crane aka the Scarecrow, travelling via train, reading through Harley’s files on his way to NYC. There he is joined by the Mayor DePerto and his erstwhile assistant Madison, both of whom have a crazy hard-on for destroying Harley at ALL COSTS. Scarecrow takes the job, assuring an angry Madison and a vexed Mayor that his previous interactions with Harley will serve him well in undermining her, and Crane states his whole policy hinges on Harley attending the upcoming Mayoral Debate.

Meanwhile, Harley is cutting into the Mayor’s lead in the polls, and is out on the street, “undercover”, as she finds out what the public are saying about her and what they want. More green spaces, doing something about the homeless, etc. Harlem Harley who has been kind of an assistant/adviser so far in this story, gives Harl a whole stack of notes on the upcoming debates, which Harley promises to skim through, but she’s “gonna freestyle it” (of course).

Back in her hotel room, Harley is working through the papers, but she’s hungry and about to call room service – when Mason appears! Readers will recall Mason from previous issues and let’s just say for Harley-Mason shippers, this ship finally finds its port! There is a touching scene where Poison Ivy comes to their room and see’s Harley asleep with Mason – there’s no jealously, she just orders  the resting couple breakfast in bed in the morning.

Come the debate, Harley is all set to go, and when it is her turn to speak after Mayor DePorto, she comes out swinging! Unfortunately the Scarecrow is in attendance, dressed in his ominous garb now, and as one would suspect, he releases the fear toxin upon Harley, setting forth in her a pattern of crazed dark imaginings that rotate around the Joker, who is killing all her pets while Harley is busy with her own mad life, and then he covets one of her most prized friends, Poison Ivy, which sets Harley off into an even deeper rage.

Realizing the gravity of the situation, Ivy seizes the moment to come down and kiss Harley with her special lipstick, reasoning this will break the effects of the toxin. She’s right, and as Harley wakens, Ivy tells Harl what happened…SCARECROW.

Analysis: There’s a lot to like in this issue, from the detailed sinister art detailing Scarecrow’s face, which is menacing even before he puts on the hideous mask, to the ultra cool and crazed sequences when Harley is under the influence of the toxin. In between the cool art, the strength of the story shines through as always.  With the subplots trimmed down to allow more room for the Mayor arc, we get some heavy emotional payoff in the Harley-Mason reunion and writers Conner and Palmiotti aren’t shy about adding in the Ivy angle either. As a long time reader and lover of the series, it’s refreshing to see this NOT be a love triangle somehow – Ivy and Harley have never been about ownership, there’s something quite beautiful and sweet in Ivy sighing, and saying “my cute little psycho.” Whatever happens, the two of them are solid. We also get that full lip-locked kiss which was missing in prior issues!

As a side note, I also found the scene with Harley going undercover to see what voters like very amusing and well thought out! The panel of Harley, with her tongue sticking out furiously writing down notes displays with a casual ease just how serious, in her own way, Harley is about becoming Mayor!

Final Thoughts: The action is escalating in the Harley for Mayor storyline and with the appearance of Scarecrow, things are coming to a head FAST. The slick, amusing storytelling by Conner and Palmiotti is on display and gorgeous and little character payoffs make this one of the best Harley Quinn issues released this year – and that’s saying something!