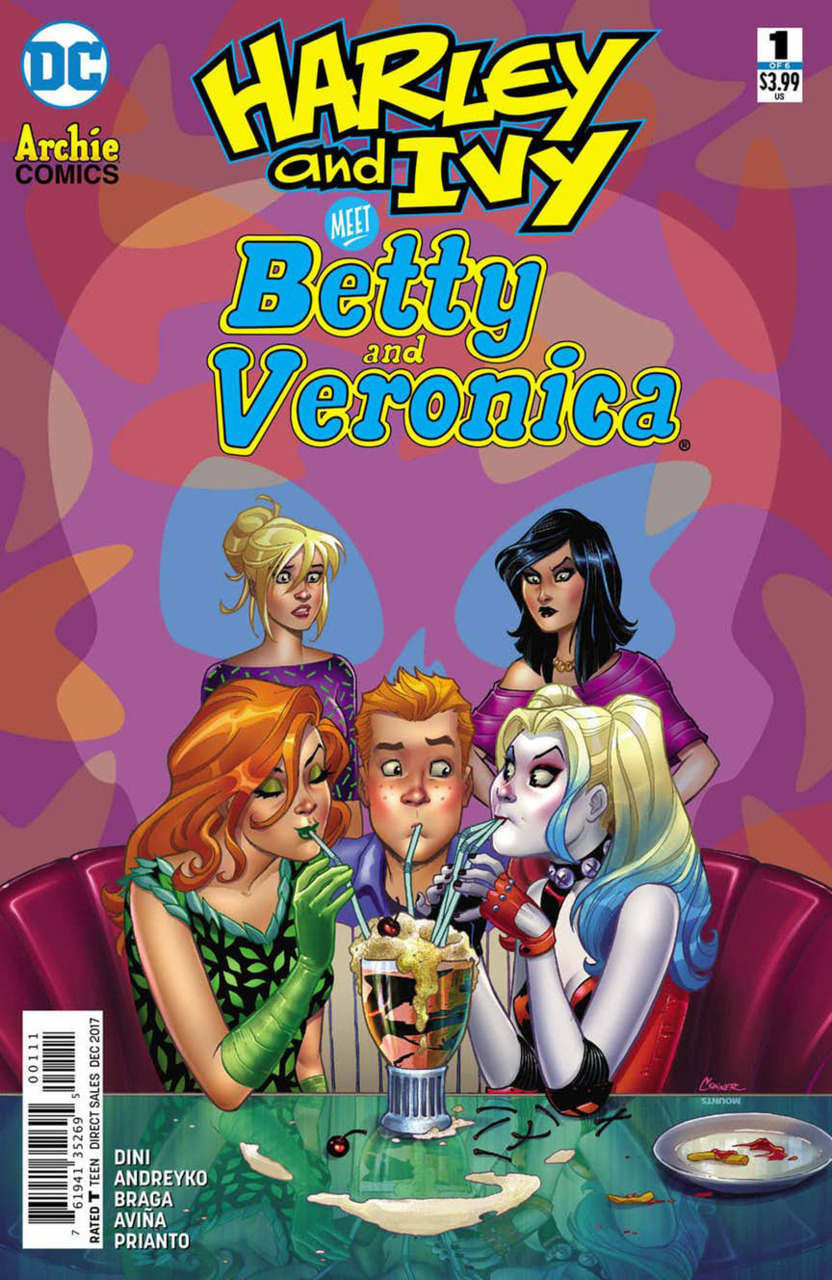 Synopsis (spoilers ahead): Hiram Lodge owns Sweetwater Swamp and plans to turn it into a business college. He says that students will get a selection of free classes (that come with some ominous sounding fees). Ivy hears about the destruction of the swamp and the news upsets her. She wants to lay one of her horticultural smack-downs on the billionaire but Harley uncharacteristically convinces her to try a more reasoned approach. The pair decide to head to Riverdale.

Hiram has convinced Riverdale High to give some extra credit to students that help decorate his club for a Costume Gala the next evening. Veronica comes to the school with a bus to take her hesitant classmates to the club.

Harley and Ivy dress in business attire and go to a meeting with Hiram Lodge where they report on the importance of Sweetwater Swamp to the ecology of Riverdale. They ask that he cancel his plan to destroy it. He tells them that he will take it under advisement, which in billionaire-speak means ‘get lost’. Ivy uses her pheromone powers to convince Lodge’s butler Smithers to get them an invitation to the Gala.

At Lodge’s club, Archie and Jughead are trying to get the fog machine working. Betty comes along and sorts it out for them. Veronica realizes that she has a costume catastrophe and reluctantly goes to a strip mall costume shop with Betty to find a replacement. They struggle to find costumes, but finally settle on something.

At the Gala Harley and Ivy arrive in their bad girl costumes. Harley in her head to toe jester outfit and Ivy in her leafy onesie. Betty and Veronica arrive dressed as Harley Quinn and Poison Ivy as well. Betty as Suicide Squad Harley, and Veronica as leotard Ivy. Harley is thrilled by the homage. Until next time…

Analysis: Writers Paul Dini and Marc Andreyko try to mix the DC and Archie comics universes and delivers a logical but uneven story. I am the target market for this book, not demographically but in terms of my comic book interests. I am a Gotham City Sirens fan and Harley Quinn is probably my favorite DC character. Her relationship with Ivy is one of my favorite ships, second only to Bruce and Selina. Also, I am finishing up my second watch of Season 1 of the TV show Riverdale. I love the show, particularly the friendship between Betty and Veronica.

I am also a huge fan of the Archie horror comics. I love Afterlife with Archie, The Chilling Adventures of Sabrina, and can’t wait for the upcoming Jughead the Hunger by Frank Tieri. The one shot was terrific. I read some traditional Archie comics as a kid but admit I don’t recall the details of the relationships in those old comics. My current head-canon of the characters is informed more by the TV show as it will be for the majority of readers of this book.

My biggest problem here is that Betty and Veronica hate each other. There appears to be no friendship whatsoever between them. I know that in the comics they have more competition for Archie’s affections than they display in the TV program, but I recall they were also best friends. That friendship is completely missing here.

There are also some characters that could be introduced better. Sabrina is in the book for almost three pages before she is named. I am reading the Sabrina comic so I am aware she is part of the Riverdale crew, but if I didn’t recognize the haircut I would have been lost. The character Midge is tangentially introduced in a small panel on the second page, but it would take an eagle-eyed reader to recognize her haircut again later.

Artist Laura Braga seems to have a heavy-line approach to her art here. The drawing is generally solid although there are some faces, particularly Mr. Whetherby’s close up, that appear odd. The colors are by Tony Avina and Arif Prianto and do lend interest to the pages. There are a lot of vivid purples and greens. Harley and Ivy are colored well. The palette changes effectively from scene to scene and keeps things interesting. The best piece of art in the main part of the book is the last page where Harley and Ivy meet Betty-Harley and Veronica-Ivy. The page layout is interesting and the colors are vivid, though Veronica has a strange pouty expression and Betty’s face seems uncharacteristically blank. It is reminiscent of past takes on the characters however.

I really loved the cover by Amanda Conner and Paul Mounts. Betty and Veronica look on with jealousy as Harley and Ivy share an ice cream float with Archie. Harley looks particularly adorable drinking as much as she can through multiple straws. It comes as no surprise to me that I love the Conner/Mounts collaboration as they are both some of my favorite creators.

Final Thoughts: If it wasn’t for the cover and the basic concept of this book, I’d give it a lower rating. This feels like a missed opportunity to boost the profile of the Archie comics. I want to love this book so bad, but so far I don’t.