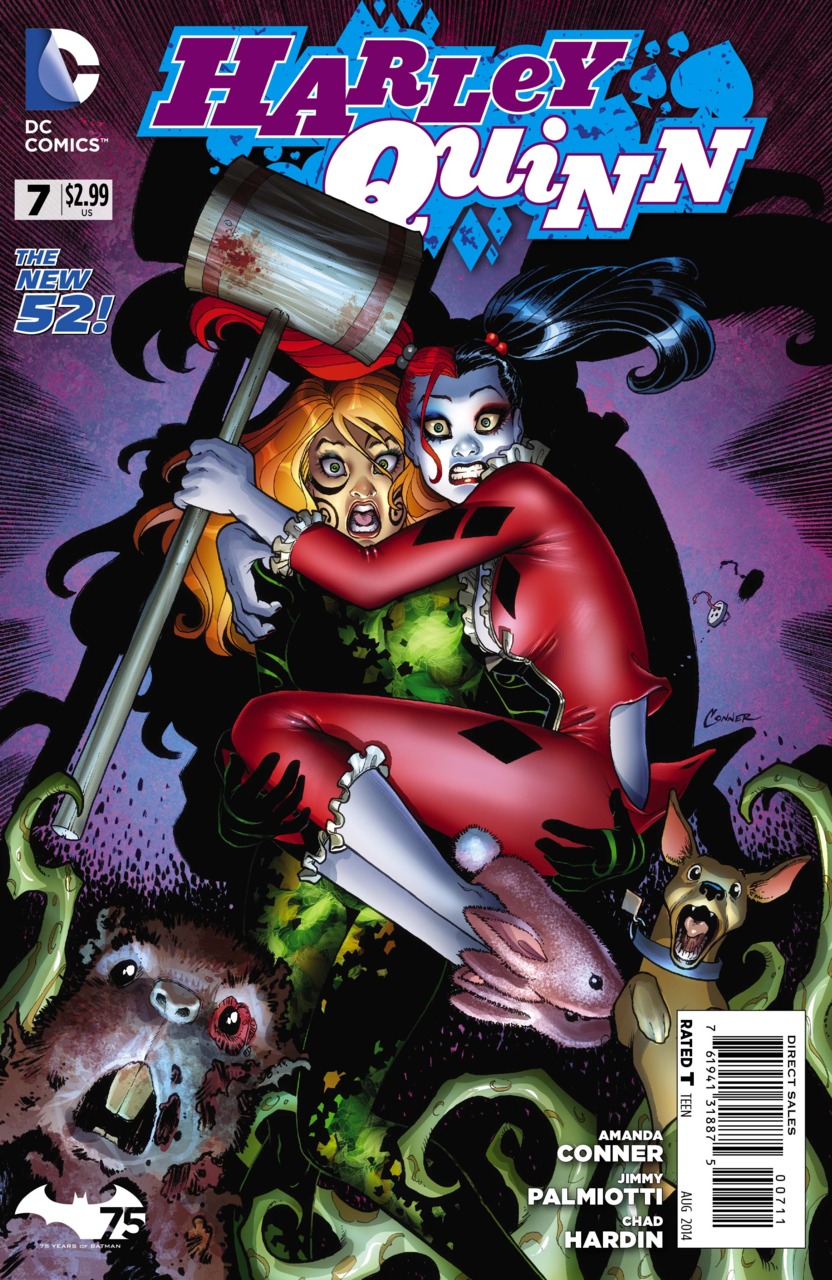 I'm gonna be honest, I dropped off of this series after the first three issues. Not because I didn't like the series, but because I was new to comics, and was buying everything in sight. I had to cut back, and this was one that got the axe.

So as I come into this series, several issues later, and open it up, the first thing I notice is how much they have improved on the art. Chad Hardin does both pencils & inks, his work looked a little scratchy in the beginning, and the colors were too soft. By issue #2, they brought in Stephan Roux to help Hardin get down the tone of the book, and I can see here by issue #7, that it worked. The art matches the tone of the book perfectly. The inks are nice and clean, and the art is more vibrant, giving it a more wacky cartoon show feel. (When I say cartoon-ish art, I don't mean that as a knock. It's usually something I dig.)

With a book like this, you aren't getting it for the story. You aren't trying to find out how Harley will overcome the next obstacle or challenge. At least not in the same way you would Batman. This is a zany, wonky, Anamaniacs type of book, where you get a break from the dark, downer stories that are generally told in other Bat-books. Just sit back, and enjoy it, and I'll tell you a story of the hijinks Harley Quinn got into this month.

So Harley and Ivy are tanning on the beach of Coney Island, bringing us up to speed on what's been going on. Harley has had a hitt out on her since the end of issue #1, and they are still trying to find out who has it out for her. They are then interrupted by a few guys wearing some, as Harley calls them, "Spee-Dont's", and these guys begin hitting on them. They accept their company, burrying one in the sand, and Harley makes the other paint her toenails. Ivy gets a lead on who might be out for Harley. It's someone who has been accessing Harley's laptop, and posting updates and increasing the bounty on a regular basis.

They head back to Harley's place, eat Chinese food, and find a file hidden in a file, hidden in a file… But Harley doesn't know the password. Ivy puts Dan, their tag-along hunk, to sleep, and tells Harley to go to sleep too because she thinks the person is coming in when she falls asleep, and posting the updates. After fighting the urge to sleep, and seeing a familiar smile under Harley's bed, she finally passes out only to sleepwalk to her laptop, and update the hit on her. Ivy is about to stop her, when some assassins barge in. Ivy fights them, but is unsuccessful until Harley wakes up, and brutally murders the assassins.

They bag the body to one of the assassins when his phone goes off, a reminder for an assassins guild the next day. Harley, Ivy, and Big Tony (who is a little person, if you didn't already know) wait outside the meeting, trying to find a way in without dying. Ivy uses her plant powers to restrain everyone in the building, Harley tells them to back off, a guy smarts off, and Big Tony shoots him in the head.

The three then celebrate by buying new shoes.