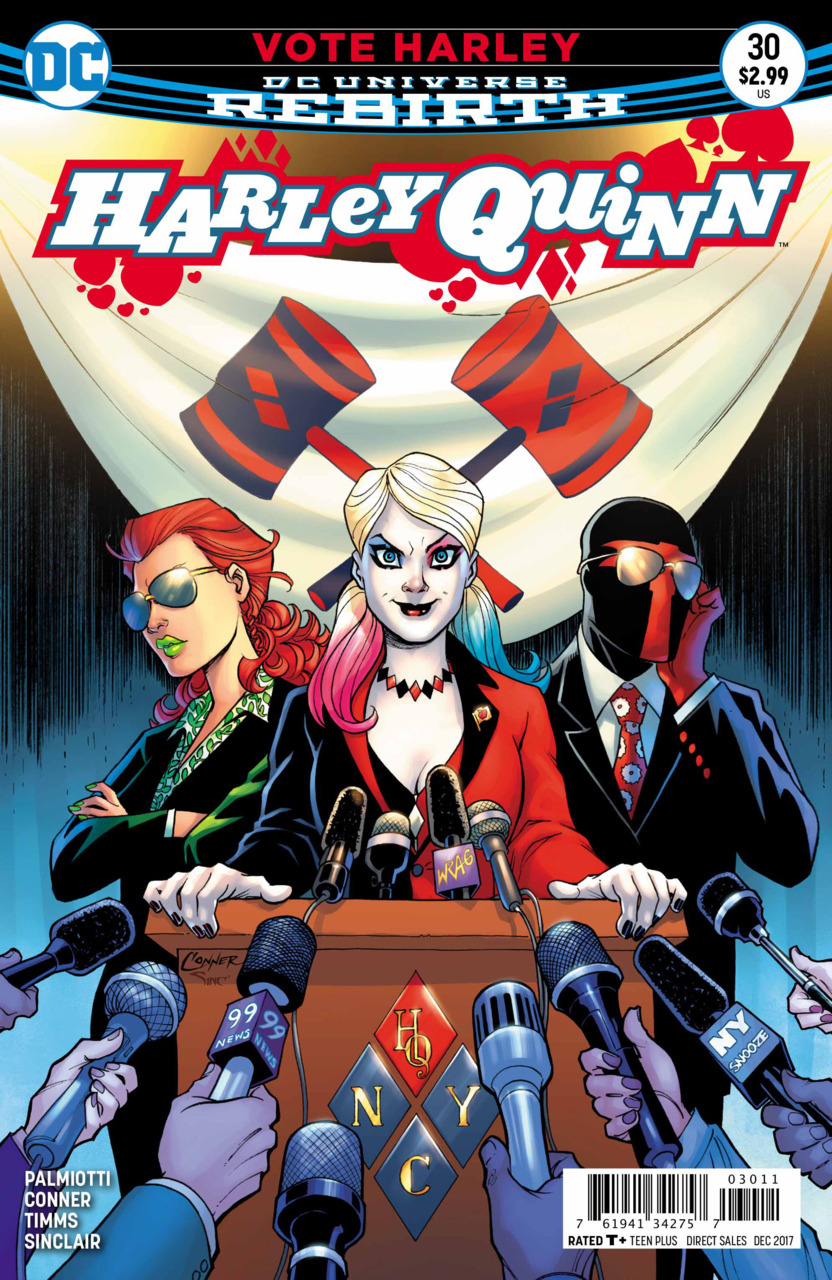 Overview: Harley eats into the current Mayor’s lead in the mayoral race, while Poison Ivy sets off an ambitious park reclamation plan for NYC! But it appears the Mayor may have one more trip us his sleeve.

Synopsis (spoilers ahead): Following up from the last issue where the Scarecrow’s fear gas turned Harley into a manic rage as she attacked her fellow candidates in a live debate on TV, Harley and her pals are surprised to learn that the incident has actually drawn her closer to the overall lead in the race! It seems voters love Harley’s feisty attitude!

While Harley moves to call a press conference for the next day, she instructs Ivy that her campaign is going to be all about parks, parks, and MORE parks. Ivy comments that the crowd will enjoy what she has in store, and at the press conference in Central Park, Harley announces that what she is about to do ISN’T a campaign promise – its Harley SHOWING the voters what she can do and what they can expect more of if she gets elected. She then gives Ivy and her assistants the go-code, and they all drop off a series of “plant-bombs” (for want of a better word) designed by Poison Ivy, which then set off a chain reaction of vines and trees reaching out across the city from Central Park!

Meanwhile Scarecrow is asking (quite menacingly) for his money for the job he did on Harley last issue – the Mayor at first refuses, which leads to Scarecrow using the gas on the Mayor and the soldiers guarding him. Scarecrow quickly gets his money and departs, as the Mayor soils himself in fear.

As Harley continues to plan her mayoral campaign, she is somewhat stunned to see that while she is neck and neck in the polls, there is also quite a bit of negative feedback from the park stunt – it turns out people don’t like the subways being clogged with tree roots and people with pollen allergies having issues! Still, Harley being Harley, she takes it in her stride, while Ivy admits she may have gone a little too far.

Harley and Mason take some time off of work and have a bit of a deep and meaningful conversation about their future and what Harley’s plans are if she really does manage to win this election, which is looking increasingly likely.  Mason really wants to take Harley to Florida for a vacation, to get away from the spotlight (he is a wanted felon after all) and so she can meet his friends, in much the same way as he has been exposed to all of Harley’s lovable group.

In the background to this, the Mayor is growing increasingly bitter as he sees his lead being chipped away, and potentially losing to the challenger, Harley Quinn. Now that he sees himself dropping in the numbers he instructs his assistant Madison to go for the nuclear option…Mason is seized from a car driven by Eggy and then Madison delivers a message to Harley – which results in her announcing on live TV that she is pulling out of the race! She has no further comments at this time.

Analysis: Picking up in the middle of a strong and very focused arc, it’s again both interesting and amazing how much story Conner and Palmiotti get through in twenty-one pages. In today’s decompressed aka very lengthy/slow storytelling, Harley Quinn is a title that consistently delivers bang for it’s buck every fortnight.

Outside of the mayoral race, this issue touched on two ships – one very specifically, namely Harley and Mason, who are at that delicate stage where they suddenly realize they both have feelings and want this to go somewhere, and another less overt ship – that of Ivy and Harley. As a long standing lover of that relationship, it’s both fascinating and a little sad to see Ivy clearly hiding her somewhat sad heart, as she watches the Mason and Harley romance bloom. But then again, it’s actually a very powerful statement that Ivy makes in this issue – she lets the plants go widely out beyond the two blocks Harley specified, and when Harley is both delighted and somewhat stunned, Ivy reminds her, “Cmon! Can’t you take a joke now!” The Ivy-harley dynamic is a complex and strong relationship – it’s both sexual and friendly, with both characters able to have a good give-and-take in the relationship. Don’t forget, in an earlier issue Harley did actually advance the idea of going “full-time” with Ivy on their trip to the Caribbean, and it’s enjoyable to see the subtle but consistent way writers Conner and Palmiotti have treated this relationship. I really have no idea as a reader how this will all end up and if Mason will become collateral damage or indeed will Harley take that trip with him to Florida. He seems like a sweet guy, I hope it happens.

The art in this issue maintains the consistently strong visuals which are a feature of this book – the fear gas scenes with Scarecrow landed a nice touch of psychedelic terror and I particularly enjoyed the scenes with vines crawling across the city as Ivy released the plant bombs. All in all, this is a very meaty good story issue of Harley Quinn with a nice dose of character moments, especially for Mason and Harley. A lot hinges on the next move for Harley and the supporting characters in this book.

I would be remiss not to mention the news that Conner and Palmiotti are departing Harley Quinn in the near future with Harley Quinn #34 and the talented Frank Tieri will be coming on board as writer on Harley Quinn #35 along with artist Inaki Miranda, from Tieri’s recent Catwoman run. I’ve long been a fan of Frank Tieri’s work and as sad as I will be to see Amanda and Jimmy close out their run, which I have LOVED since it started in the New 52, I am excited to see the new team come on board as well!

Final Thoughts: Another very solid issue which deepens the relationship stakes for Harley as the mayoral race heats up! Relationship waters are soon to be navigated…and the Harley for mayor campaign is in trouble. A must read for Harley fans.